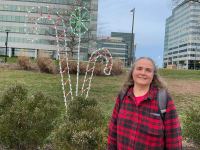 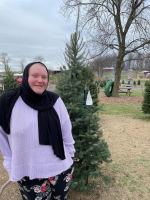 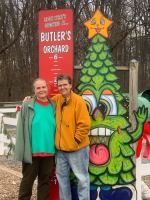 When I last wrote, I was frustrated by the long wait to get North into a partial hospitalization program and into the interim instructional services (IIS) program. A lot has changed since then.

On Monday, North found out that their review of Eurydice had been accepted for publication in a local paper in Falls Church. Fewer than 10% of the reviews Cappies write are published, so it’s an honor. They also got their PSAT scores and were pleased with them, especially the English score. Finally, we got word that North’s application for IIS was accepted.

For North take part in IIS, they needed to make some schedule changes and those came through the next day. Contrary to what I said before (and what we originally read about the program), there are no in-person tutors. It’s all online and there are limited course offerings, so North had to drop all their AP and IB classes and switch to honors versions of their English, History, and math classes. When they eventually go back to school, probably third quarter, they will stay in those new classes. They are also going to drop French and Foundations of Tech because there are no IIS versions and it seemed too hard to get caught up. So, the only two classes of their original seven they will return to will be astronomy (which has an IIS version) and painting (which doesn’t). When I met with all North’s teachers right before Thanksgiving, the art teacher seemed willing to be flexible about North’s second quarter work. I’m glad they will probably stay in that class because they enjoy it.

Even though North’s been admitted to IIS, they’ve only been enrolled in the astronomy class so far. They started to watch the lessons on Wednesday. They’ve attended a class—it meets twice a week– and taken some quizzes and have done all of last week’s work and some of next week’s, too. They’re supposed to hear from the English, history, and statistics teachers on Monday. I am glad to have a plan in place that should let them finish eleventh grade this year.

On Wednesday morning North and I went to the post office to mail their Christmas presents to my mom, sister, and niece. It was good we got that errand done because Thursday turned out to be unexpectedly busy. Later in the day on Wednesday we got the call that there was a spot for North in a partial hospitalization program. We’d have an intake appointment on Thursday and if all went well, they’d start the program on Friday. It was the same one that offered us a spot when North had covid. It’s in Columbia, about forty-five minutes north of where we live and one of the closer locations of the five programs to which we’d applied. (Two were in Virginia.) We were all very happy and relieved to get this news.

North also had a migraine that afternoon and took their new medication for the first time. They were feeling better after an hour—usually it takes several hours—so that was cheering, too. (However, the second time they took it, on Saturday, it didn’t take effect as quickly.) That night after Beth and I had gone to bed, North put up the Christmas decorations in the living room and made red velvet cookies. The decoration wasn’t a surprise, they told me they were going to do it, but the cookies were. They were also excellent.

On Thursday we had a slew of appointments. North had a psychiatrist appointment in the morning. I was under the impression it was virtual because the last one was, but it was in-person, so when it was time to leave, I was still out on my morning walk and Beth texted me to say she’d drive to where I was and pick me up. That was a little rattling. North’s regular psychiatrist Dr. W just had a baby, so it was with her substitute Dr C. Luckily, though, North knows and likes him. He led the trans kids support group they attended in middle school.

We got back home just in time for me to attend a virtual meeting with my own health care provider about some mysterious leg cramps and pain I’d been experiencing. It had been worst while we were at the beach and right after and seemed to be resolving by the time I saw her, but I kept the appointment to talk about what to do if it comes back. I’m wondering now if it had something to do with having covid, because of the timing.

After lunch and squeezing in a little work, we hit the road for our intake appointment, listening to Christmas music in the car on the way. The program is in a suite in an office building, but the space is a little cheerier than what I saw of the adolescent psych unit when North was hospitalized. In the main lounge area, there were a lot of puzzles, games, stuffed animals, and evidence of crafts projects in progress. There were pillows and a throw on the couch and a rug on the floor. There were also big windows overlooking the grounds of Merriweather Post Pavilion, where there was a Christmas light show.

We met with a counselor, first as a family, then just me and Beth, and then just North. It took a little over two and a half hours. The whole thing felt thorough and unrushed, and we were able to go into more detail than we often can with psychiatric professionals. That was reassuring. When it was North’s turn, the counselor said we should feel free to leave the building if we wanted, so we went for a walk in the light display. It wasn’t dark out yet and it hadn’t opened, but none of the people setting up told us to leave. When we got back, the counselor said we were good to go, and North should come back in the morning.

The first day went well. North says there are seven kids in the program, and they are in various kinds of therapy most of the day, with a study hall to do schoolwork. There was art therapy that day and they decorated bags to fill with affirmations. Beth and I will be attending a multi-family group therapy session every Tuesday and then family therapy for just the three of us at a time to be determined. That night, we got pizza and watched a cheesy Christmas-themed lesbian rom com (Merry and Gay), which was just what we all wanted.

On Saturday we went to Butler’s Orchard to get a Christmas tree. North saw the one they wanted early in the process, but we walked around to look at the others, just in case. Then while Beth was paying for it and watching one of the kids who was working there tie it to the roof, I took North to the snack bar. I saw people walking away from it with hot chocolate and noticed the cups were small but topped with a generous amount of whipped cream. I thought that ratio of sugar to fat might work for me, so I got one (and I didn’t go out of range on it). North got a pretzel and some hot cider. Next, we went to the farm market, where we browsed and bought some treats and Christmas presents. It was a very nice outing. We continued with the festive activities on Sunday afternoon while North was at Zoë’s house—Beth worked on the outside lights, and I addressed Christmas cards and wrote this.

While all this was going on, Noah went snorkeling at the Great Barrier Reef. He couldn’t take pictures because it’s underwater, and I wasn’t able to get much out of him about it. He said a boat took them out, and they all wore wetsuits to protect themselves from jellyfish, and that it looked “like a coral reef…with fish.” I am glad he had this experience, and perhaps I will learn more about it when he comes home, which will be in a little over a week. Between now and then he’s going to spend a couple days in Sydney. It’s good he’s getting a chance to explore a bit now that his classes are over.

He’ll be exploring the West Coast this summer, as it turns out. He got into a program Ithaca runs in Los Angeles, that helps communications students or recent grads get internships. There’s also housing, plus optional classes he can take. He’ll be leaving right after graduation. It seems things are falling into place for both kids.