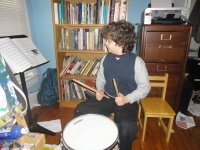 This morning, shortly before 9 a.m., I got a sheet of notebook paper and wrote “Noah’s Favorite Thing: a To-Do List!” across the top. This was a bit of teasing on my part.  He does not particularly like it when I make to-do lists for him, but it was the last day of a three-day weekend and I wanted to make sure he got all his homework and chores done so we didn’t have any unpleasant surprises at bedtime or tomorrow morning. The kids always get a day off between the quarters so teachers can prepare report cards. Between Martin Luther King Day always being on a Monday and New Year’s Day falling on a Monday this year, it’s as if our school system has just given up on Mondays this month.

I didn’t really mind an extra day home with the kids, though.  I’d worked several hours on Saturday and Sunday so I didn’t have anything urgent to do, and thanks to a well-timed play date with Riana (formerly known as the Ghost Crab), I was going to have the morning alone with Noah, which is a rare treat.  Accordingly, the first two items on his list read:

I didn’t want June to be jealous and I thought if we brought her home a treat she wouldn’t mind finding out that we’d gone without her after the fact.  We set out right after Riana’s mom picked up June.  It was a soggy sort of day.  We got an inch of ice and snow on Friday night and this was our first day since then with temperatures above 40 degrees, so everything was wet.  Water dripped from downspouts and little pieces of ice and snow fell from tree branches and rooftops as we walked.  The sidewalks were clear but we both wore boots for splashing in puddles.

As we walked Noah told me about his day with Sasha yesterday.  They’d had a marathon play date that started at 1:30 with two hours of sledding near the creek, progressed to Sasha’s house for a snack of banana, flatbread and chocolate tea, and then moved to our house where they spent hours playing B’loons Tower Defense V.  Sasha stayed for dinner (Beth made baked ziti) and then they played more B’loons until Beth drove Sasha home at 7:20. Mostly what Noah wanted to tell me about was the sledding, how they had pretended they were bobsledding in the Olympics, and how they’d invented some new Olympic sports, how the best sledding trail, the one that’s “really fast and dangerous” didn’t have enough snow for sledding so they had to content themselves with the other one, which was also pretty muddy, and how the more liquid mud splashed up when their sleds went over it and how when that happened they sometimes “caught some air.”  He was joyful recalling all this.

Once we got to Starbucks Noah asked hopefully if he could get a 16-ounce vanilla steamer instead of his normal 12-ounce one.  I was feeling indulgent, plus it was extra milk in addition to extra sugar, so I said yes.  He got a blueberry strudel muffin to go with it. I was restrained and had a latte with no sugar or syrup or pastry.  We sat at the bar and watched a man in a cherry picker try to repair a light in the shopping center parking lot. (It was such a dark morning they were still lit.)  Noah thought it looked like a mythical being with a long neck.  He still says things like that, and when he does it seems hard to believe he will be in middle school next year.  But he will– we find out in a couple weeks whether or not he got into either of the magnets where he applied.  I told him when he’s in middle and high school he will appreciate getting this day off more than ever because he will just have finished taking midterms. Then I explained midterms and he said after all that he might want more than a one-day break. I tried to imagine him taking midterms and glanced down at my coffee cup and then the days when I used to push him in the stroller to the Starbucks in Dupont Circle and feed him the foam off my lattes did not seem very far away, even if he does stand as taller than my chin now.

When we got home we read for over an hour from Forge, a historical novel about an escaped slave who fights with the American soldiers at Valley Forge.  It’s the sequel to Chains, which Noah read for school this year.  The protagonist is fifteen — many of the soldiers in the book are teenage boys and the drummer boys are even younger. I knew this about the American Revolution, of course, but it strikes you differently when you have a ten-year-old boy, a drummer no less.  I have to say I am happy he does his drumming in our study or at school, and no one shoots at him while he does it.

We quit reading just before June was due back home so he could vacuum the living and dining room floors I’d cleared of toys before June covered them up again.  June actually returned before he’d finished.  She’d already had lunch at Riana’s house, so I escorted her to her room for an early Quiet Time before her afternoon play date with Merichel.

When June came out of her room forty minutes later she had a stack of Dora books she wanted me to read to her and even though Dora is not my idea of quality children’s literature, the idea of cuddling up in bed and having some one-on-one time with my younger child in between her many social engagements seemed appealing.  Before I read to her I reminded Noah of the items left on his list (homework, percussion practice, typing practice) and I made him lunch. I fixed him some leftover ziti with butter and grated parmesan and a bowl of applesauce with cinnamon sprinkled on top.

“Ziti with parmesan and butter. What could be better than that?” Noah said with satisfaction as I placed his lunch in front of him.

“A castle with princesses and ponies,” June piped up.

You’re going to eat princesses and ponies for lunch?” I said in mock surprise and soon she was over at the toy castle, pretending to be a dragon munching on the royals.  But I was thinking silently that I know something much better than noodles or princesses: a morning with my firstborn as he stands on the threshold of midterms and whatever else middle school has to offer.