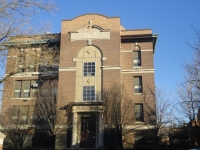 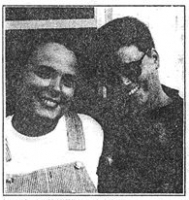 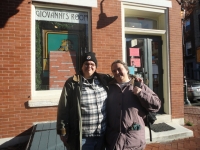 On Wednesday morning, the morning of the twentieth anniversary of our commitment ceremony, June crawled into bed with us at 6:40 a.m.  We all dozed a bit longer and around 7:00 Beth got out of bed and was walking around my side of the bed on her way out of the bedroom when I put my arms up for a hug.  The cue reminded her. “Happy anniversary,” she said.

The kids went to school and Beth went to work and the day unfolded like a normal weekday.  I read a few chapters of Catch-22, which I’m reading for my book club, and I exercised and cleaned the refrigerator.  I worked on a set of instructions for growing hydroponic green beans, cucumbers and lettuce.  I found out I’d landed a job writing three grants for a group of D.C. public charter schools. Okay, that last part was not so routine.  I haven’t written a grant since 1994, when I worked for Project Vote, so I greeted this development with a mix of excitement and trepidation.  But I can’t even start until I attend a series of meetings with school officials in early February so I can put it out my mind for now.

That morning Beth posted a picture of the two of us at our commitment ceremony on Facebook, along with a copy of a newspaper story from the Philadelphia Gay News, about how our commitment ceremony announcement in the Philadelphia Inquirer was the first one ever for a gay or lesbian couple.  (At the time my father was the managing editor of the Inquirer. He did not participate in the discussions about whether to publish the announcement but I imagine the fact that I was his daughter must have been a factor in people’s minds.  If nepotism did help break down the door for other people behind us, I have no problem with that.)

One of the things I love about Facebook is all the positive feedback you get on milestone posts.  All day long the congratulations poured in on both posts.  It made me cheerful every time I checked it and gave the day a festive feel, even if I was at home alone, writing or doing chores for much of it.

Shortly after June got home I started cooking dinner.  I wanted to get an early start on the eggplant-bulgur casserole because I was also making a cake, the spice cake with lemon glaze I make almost every year on our anniversary. It was our wedding cake.  June helped pour the ingredients in the bowl, mix the batter, consulted with me on what shade of pink to dye the glaze (it was a very deep pink, almost red) and helped spread the glaze on the cake.

While we ate dinner, we listened to one of the three mix tapes we made for our ceremony.  (Our ceremony was a very low-budget, DIY affair so we provided our own music.) I haven’t attempted the play the tapes in years and I wasn’t even sure if the one I’d selected would still play or if it would be warped, but it sounded fine after two decades (or almost two decades- a notation on the case indicated we’d re-made it in 1994. I don’t remember why).  It was the one we played last, the most upbeat one.  It starts with Prince’s “Let Pretend We’re Married” and the Eurhythmics “Would I Lie to You?” and goes on in that vein.  It’s a fun tape and I only had to rush to the tape player to turn down the volume once so the kids would miss some not quite age-appropriate lyrics.

The music, familiar and yet from such a different time in our lives, and the photo of Beth with her early 90s trademark flattop really took me back. Sometimes it seems like it hasn’t been that long since we were in our mid-twenties and childless and new to living in the big city, and sometimes it seems like another life entirely.

After dinner and before cake, we exchanged gifts. Beth got me Stephen King’s latest—11/22/63— and I got her a gift certificate for Giovanni’s Room, a gay bookstore in Philadelphia.  And why would I get her such a thing when we live in suburban Maryland?  We had a kid-free weekend in Philly ahead of us, that’s why.

We drove everyone up to Mom and Jim’s house on Saturday afternoon after June’s basketball game, dropped the kids off and enjoyed two nights and one day to ourselves in the City of Brotherly Love.  We had two very nice dinners at the Kyber Pass Pub and Cuba Libre. If you go to the first, the vegetarian meats (BBQ and fried chicken Po Boys) and the fried vegetables (okra and sweet potato fries) are very good. If you go to the second, you must order the buñuelos con espinaca. We visited Reading Terminal Market and had lunch there.  I got a vegetarian cheesesteak at a stand where the service was so bad it crossed over from aggravating to comic, but the cheesesteak was not half bad once I finally got it. We browsed at Giovanni’s Room and came out with a few books. We spent a lot of time in our hotel room and in a local coffee shop reading. We saw a non-animated, R-rated movie, the lesbian coming-of-age film The Pariah, which was well acted and a good story, though there were some odd things going on with the camera work, probably meant to indicate the protagonist’s emotional state.  Our room had a gas fireplace and a Jacuzzi and we employed them both.

We walked a lot on Sunday and made some serendipitous discoveries, stumbling upon the President’s House where the first two Presidents lived while the Capitol moved to Washington. The building is no longer there, but they have rebuilt parts of it, with low brick walls to show where walls went and some chimneys and doorways recreated.  You can also look down into the ground to see the actual excavated foundations through glass.  There is a lot of information posted on signs about the house and its inhabitants, including the nine slaves who lived there. It seemed a fitting place to visit during MLK weekend and we would have lingered longer and read more if it had not been so very cold (in the twenties most of the day and quite windy).

We also found the block where I lived from the ages of five and half to almost nine, quite by accident, and from there I remembered how to walk to my elementary school a few blocks away, so we did.  I don’t think I’ve seen it since 1976 but other than new playground equipment (and what I believe to be an addition) the soaring one-hundred-year-old red brick building looks just as I remember it.  It was odd, but not unpleasant to be walking around our old neighborhood on Sunday, because it was the second anniversary of my father’s death. As we walked along the blocks where he must have walked so many times, I imagined him in his thirties walking with a little-girl version of me, maybe headed to the playground, maybe going for ice cream or to peek inside antique stores.

On Monday morning we picked up the kids and heard all about their trip to the Franklin Institute. June loved the giant heart and veins you can tour (what kid doesn’t?) and the movie they saw in the planetarium about black holes and Noah liked the city that changed colors depending on environmental choices the citizens made.  June left Mom and Jim’s house laden with necklaces, a jewelry box and a wicker doll high chair.  (Mom is downsizing in preparation for her move).  On our way out of the Philadelphia area, we made one last stop, for soft pretzels, and then we were homeward bound, arriving mid-afternoon, in time for undone homework and weekend chores.  Our anniversary celebration was over.

But I still have one song from the commitment ceremony tape running through my head. It’s “The Queer Song,” by Two Nice Girls.  It makes me think how much has changed, not just over the past twenty years, but maybe the past thirty.  The speaker is re-assuring her love interest, who is still insecure in her sexual identity:

I’m gonna take you to queer bars
I’m gonna drive you in queer cars
You’re gonna meet all my queer friends
Our queer, queer fun it never ends
We’re gonna have a happy life
Both of us are gonna be the wife
I’m gonna tell you how it’s gonna be
It’s queer queer fun for you and me

(If you don’t know this song, it’s worth knowing that it’s sung partially to the tune of Buddy Holly’s “Not Fade Away.”)  I have to reach far back into my life to remember a time when the idea of my own happiness being possible would have produced a subversive, defiant thrill, but I do remember.  I do.  I would not say my life is a never-ending parade of queer, queer fun—it has as many disappointments and sorrows as anyone else’s—but there is happiness in it, too.

As the Presidential election will no doubt remind me on a more regular basis than I’d like, my family’s happiness is still a hard pill for some people to swallow. That’s why this was a commitment ceremony anniversary and not a wedding anniversary we just celebrated. I have faith we’ll get there, maybe soon. Gay marriage will be on the table again in Maryland this year, as it was last year and a few years before that. I try not to get my hopes up.  I do want to be legally married for both symbolic and practical reasons, but on the deepest level, both of us already are the wife and we have been since that mid-January afternoon when we were twenty-four and twenty-five and stood before our friends and family and dared to imagine living a happy life together.