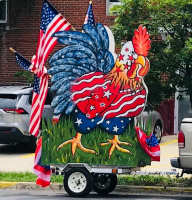 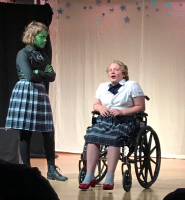 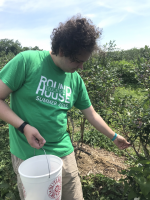 From “Dancing Through Life,” Wicked

So, for some reason we came back from the beach. Oh, wait, I remember why: Beth’s got this job and North was enrolled in musical theater camp and Noah had committed to being a counselor at a film camp for middle schoolers, so we couldn’t just spend the whole summer as beach bums.

We’ve been back two and a half weeks and they’ve been busy weeks, especially for North. In addition to going to the camp which culminated in a production of Wicked on Friday, they had rehearsals for Sweeney Todd six evenings and one weekend afternoon, and one day they babysat in between a six-hour day at camp and a three-hour rehearsal. But they had enough down time to go to see Yesterday with Beth and me one weekend and go swimming at an outdoor pool the next.

Meanwhile, Noah was largely free the first week we were home (other than working on his nursery school alumni interview podcast) and film camp started the second week. He needed some shots and medical forms for college and now that he’s eighteen he can be vaccinated without parental permission, so he went to the doctor himself. Somehow of all the things he does by himself now, that seemed particularly adult. He also had his first two drum lessons of the summer.

No one had camp or school on the fourth of July, so we went to Takoma’s eccentric little parade, complete with Boy Scouts, Girl Scouts, marching bands, people playing bagpipes and steel drums, walking dogs, and pushing reel mowers. These are standard parts of the parade but there was also giant wooden rooster festooned with American flags (the rooster is the symbol of Takoma Park) and a Trump Baby balloon, which is a new addition.

Speaking of the President, he presented us with a fireworks dilemma. We usually watch the fireworks in Takoma, but they’re doing maintenance on the lawn of the middle school where they’re normally held so it was cancelled and D.C., which would be our natural backup plan was obviously out of the question since the whole day had been turned into a campaign rally. So on the recommendation of North’s physical therapist, we checked out the College Park fireworks.

People set up chairs in a parking lot on the campus of the University of Maryland, and I thought it would be miserably hot sitting on asphalt, but it had rained in the afternoon and the lot was still damp, which kept it bearable. There were food stands and live music and people selling glow sticks to the very diverse crowd so it was a festive atmosphere. The display was impressive and long, too, like a half hour. I’d do it again if Takoma ever cancels again.

The other day North didn’t go to camp (except for the last two hours of the day) was the Monday of the second week. That was because we had an intake appointment at the pain clinic at Children’s National Medical Center. We’re thinking of switching their pediatrician to one there since between neurology (for their migraines), the gender clinic, and now the pain clinic, they get the majority of their health care there already.

Anyway, the appointment lasted all morning. We spoke to various members of the team together and separately. Their recommendation was for behavioral cognitive therapy for coping strategies, desensitization to try to stop whatever misfiring is causing North’s pain, and aqua therapy to work on strengthening the affected leg. We’re still trying to set up all these new appointments. I left the appointment feeling cautiously hopeful because all the medical professionals we spoke to seemed very matter of fact, and not at all baffled by what’s been going on.

Before we left North also let some medical students take pictures of their pupil while an electrode fastened to their toe transmitted electrical signals—it was part of an experiment to see if changes in the eye can help doctors measure physical sensations (like pain) more objectively. I thought that was kind of interesting.

On a lighter note, Thursday was free slurpee day at 7-11. It was a hot day (unsurprising for mid-July in the D.C. area) and I’d spent a long time unsuccessfully trying to find the apartment building where a writers/editors meet up was happening and I’d gotten hot and sweaty and discouraged and it seemed like ice and sugar would be cheering. As my bus pulled up to the 7-11, who should I see but Noah, the director of his camp, and four campers, all walking into the store. By the time I got back there, they were all exiting with their frozen drinks. “I swear I’m not stalking you,” I told him and then the camp director had enthusiastic things to say about what a help Noah was at camp and that was nice, too.

Friday was performance of Wicked. Beth and I met up at the community center. Noah had to leave his camp early to come see the performance and he was a little late, but he arrived during the first song and set up his camera in the back of the theater.

If you’re not familiar with Wicked, it’s a prequel to the Wizard of Oz and much of it takes place at a prep school in Oz. North’s playing Nessarose, the future wicked witch of the East and the sister of Elphaba, the future wicked witch of the West. (North’s character is the one who gets squashed by a house at the beginning of the film.) Here’s a clip (eight and a half minutes) from when most of the main characters are students at the school.

It was convenient there was a character in a wheelchair in the play, but when all the characters ran up the aisles of the theater, North was able to keep up on their crutches. The production was very good. Gretchen always gets impressive performances out of the kids in just two weeks. Elphaba was played by four different girls (all in green face paint) and Galinda/Glinda by three and they all managed to inhabit their roles. North’s old preschool classmate and basketball teammate Maggie was a very charming wizard and Gretchen’s older daughter had some nice song and dance numbers as Prince Fierro (who later becomes the straw man). I learned later she’d studied the dance moves in Saturday Night Fever for the ball scene.

There was a cast party at Roscoe’s that evening. Beth, Noah, and I got a separate table, partly because Beth and Noah were going to the White House to attend Lights for Liberty, a protest of conditions at the migrant detention centers. We thought they’d get in and out more quickly if they weren’t part of a large group. I’d have liked to go to the vigil, too, especially since I haven’t been nearly as active as I was in the early days of the Trump administration, but North objected to the whole family deserting them after their show, so I stayed behind with them. Once Beth and Noah had departed, I joined the big table at the grown-up end and reminisced with Gretchen, the camp director, and another mom of a long-time camper about the shows the kids did when they were tiny.  (North’s been doing musical theater camp since they were five years old.) Eventually the kids drifted off to get gelato and hang out in a nearby playground. It’s always hard for the actors to say goodbye to each other after the intense experience of putting a play together in two weeks.

It was almost ten when Beth and Noah got home. He said it wasn’t going to be as easy to get to the White House to protest when he’s in upstate New York, so he has to do it now. And speaking of that, I can’t believe how close his departure is, just five weeks away. In the summer I’m always happy to do the things we usually do, like going to the beach and the Fourth of July parade and watching North in drama and chorus camp performances and berry-picking (which was on the agenda this weekend), but usually at the same time I’m ticking the weeks off in my mind, counting down to a more normal schedule when the kids go back to school. But this year when that happens it’s going to feel less normal instead of more so, with my firstborn gone. That’s part of life, though, and a good one, too, so we’ve got no choice but to keep dancing through it.

And speaking of the passage of time, Beth and I marked thirty-two years since our first date on Monday. On Saturday we went to see Booksmart and then had dinner at Jaleo’s and then on Monday North and I made a blueberry kuchen with some of the berries we’d all picked the day before for an anniversary dessert. Noah went to the 7-11 to get some vanilla ice cream to top it. It seemed fitting everyone had a part in bringing the kuchen to the table, as if it hadn’t been for that first kiss one long-ago July night, we wouldn’t be a family.