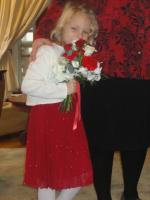 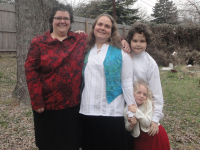 In Sickness and in Health

Eight days before we got married, Beth drove me to an urgent care so we could find out if I had bronchitis.  We’d all been sick with various illnesses since Christmas and we’d had to cancel our annual New Year’s Day get-together with my friend Joyce and her family a few days earlier. We knew Beth’s brother Johnny and his wife Abby had become sick after we’d parted and Johnny’s illness and mine were following a very similar trajectory—bad cough, body aches, fever, chills, night sweats, dizziness and fatigue with seeming recovery followed by a worsening of symptoms.  He’d called the previous evening to let us know he’d been diagnosed with bronchitis.  I had it, too. That was no surprise.

The next day, Friday, June, who was the only one of us not currently at least a little sick, woke with a fever, and said her whole body hurt.  So she stayed home from school and she missed the first basketball practice of the season and the team field trip to watch a high school girls’ basketball game, and then on Saturday she was still sick and missed a gymnastics class, and the second basketball practice of the season.

It was just after New Year’s so it was a short work and school week—Wednesday to Friday—but for us it was even shorter.  I worked less than an hour, and Beth worked from home Thursday and Friday so she could tend to June and me. And all this time, she was pretty sick herself.  (Noah, whose Christmas cold had dwindled to a persistent cough was the healthiest among us and the only one to follow his normal schedule all three days of the abbreviated week.) Independently of each other, both Beth and Noah commented that this was the sickness part of “in sickness and in health.”

One bright spot in the week was that practice started for Honors Band. We’re car-pooling with Sasha’s family and it’s a half-hour drive there and back so the boys will have a chance to connect every week, which is great because they haven’t been at the same school since third grade, but they are still good friends. On Thursday, Noah got home from band practice after his bedtime, with his homework uncompleted, and sure he couldn’t go to sleep because his head was “so full of music.” And there in a nutshell are our worries about Honors Band and the reason we let him do it.

Gradually everyone got better and went back to work and school.  Monday morning I took a walk on slightly wobbly legs. I got winded easily and it seemed as if someone had lengthened all the blocks in the neighborhood while I was sick but it was good to get out of the house because other than the trip to the urgent care, I’d been cooped up inside for a week.

We had a busy week ahead of us. Noah had another Honors Band practice on Tuesday evening and a regular band concert on Thursday. More often than not this week he went to bed without finishing his homework. Wednesday evening I broke a temporary crown on a piece of hazelnut brittle. (I know, I know, I shouldn’t have been eating it or at least not chewing it on that side of my mouth but I’ve had so much drama with that molar this fall and winter I’ve gotten used to my makeshift tooth and I forgot to be careful.) I panicked a bit wondering how I was going to fit a dental appointment into a busy day of work and wedding preparations, but they couldn’t take me until next Tuesday so that took care of that.

Thursday was a pleasant day. I worked a little, rewriting a catalog page for a bone health product, but mostly I did wedding-related chores, I picked up June’s bouquet from the florist, I made playlists of music to play during the ceremony (one without words for during and one with words for eating cake afterward), and I baked the cake. Before I left to get the flowers, another bouquet was delivered from the same florist and it was similar enough to what we ordered (orange and white roses instead of red and white roses) that I was confused about why the flowers were coming to the house until I noticed there was a card from two of Beth’s co-workers and that clarified things.

Cards and checks and presents had been arriving for a few days, but it wasn’t until I smelled the cake baking that it felt as if the wedding was really imminent. The recipe is the one we used for the cake at our commitment ceremony and I’ve been making it on our anniversary eve since then. It’s a spice cake with a lemon glaze.  Both kids commented on the smell when they came home from school. June said, “I remember what that cake tastes like now that I smell it.” And Noah suggested we all have a slice right then and there, but I told him he had to wait.  As often as we’ve eaten that cake, we’ve waited for this particular one a long time, twenty-one years.  There was only one day left to wait.

June and I frosted the cake and I made dinner and around 6:15 we left for Noah’s band concert.  It was a little different from elementary school band concerts—the orchestra and band are smaller and the choir performs with them.  Everyone sounds a little more polished and the concert itself was shorter.  So short I think we may even take June to the spring concert instead of leaving her at home with a sitter. I think she’d probably enjoy it.  On the way home we stopped at the grocery store because I’d decided the cake really did need colored sugar on top after all.

The wedding was at nine in the morning on Friday.  We got up around seven—June crawled into bed with us saying “Happy Wedding Day!”— so we had two hours to eat breakfast, get dressed and do a little last minute cleaning. We were married by a friend of Beth’s who used to be the Executive Director of Equality Maryland when Beth did volunteer website work there. The ceremony was very simple. Dan gave a speech and then we all spoke in turn about what being part of our family meant to us. After each person spoke, he or she lit a different colored candle. Beth was purple, I was blue, Noah was green, and June was yellow.  Beth gave some family history and I spoke about family traditions.  Noah read two dictionary definitions of the word family: “A group of individuals living under one roof” and “The basic unit in society traditionally consisting of two parents rearing their children.” He pointed out we meet both definitions and declared, “We are a perfect example of a family, and equally so before today.”

Then June read her piece: “Being in the family is love, care, generousity and kindness. I always know I am in the family and have alot of love for it.”

Once we all held a lit candle we used them to light a rainbow-striped unity candle. Then we exchanged vows and rings and Dan pronounced us married.  He took pictures of us inside and outside and signed the necessary papers.  We sent him off with a commemorative lollipop with a personalized label with our names and the date and two winter-bare trees growing together.  Then we listened the second playlist, a short selection of songs we’d played at our commitment ceremony and we ate cake and drank juice with heart-shaped ice cubes made from a mold my sister got us for Christmas.

Beth took the kids to school (June first so Noah could make an attempt to finish his math homework—he got about halfway through it I think) and then she worked a little while I curled up with the Odyssey and then hit the exercise bike.  We went out to lunch at Takoma Bistro where Beth had a goat cheese tart and salad and I had a lentil quesadilla and then we spent the rest of the afternoon together.  Both kids were home by 3:30 and June watched television while I read The Fire Chronicle to Noah. Then we left Noah to practice percussion while Beth and I accompanied June to basketball practice. During the first part of practice there was a long time while the girls were shooting baskets and even though there were several moms there with whom I was trying to converse, especially Megan and Kerry, I tried to keep my eyes on June the whole time because last season in all her games and practices June made one basket and I missed it because I was looking away. I didn’t want that to happen again. This time she came close over and over—once the ball bounced off the rim—but it never went through the net.  It will sometime soon, I think.

We came home to find Noah had just started practicing two minutes earlier and he was truly unable to account for the past hour and a half. All he knew was he’d been looking for his music and he’d gone to the bathroom.  We readjusted our plans to go out for pizza because I didn’t want him doing his entire practice after June had gone to bed.  Instead Beth and June went to get pizza to bring home and I stayed with him.  We ate the pizza and Noah eventually finished his percussion.

And so ends our first day of wedded life.  Tomorrow June has gymnastics and another basketball practice. Noah will do homework and practice percussion again. We will go and get our portrait taken in our wedding clothes late in the afternoon, but otherwise it will be an ordinary Saturday for a suburban married couple with kids, because as Noah said, “We are a perfect example of a family, and equally so before today.”