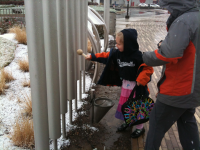 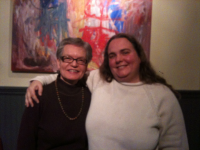 “Do you think you were good for so long at Ya-Ya’s that you were just full of bad behavior that just had to get out?” I asked June as we walked to the library on a chilly afternoon, three days after Christmas. It was our first day back from West Virginia—a pleasant five-day stay that involved sledding and ice skating and baking gingerbread cookies and watching Christmas specials and driving through the light display at Oglebay Park and eating Christmas dinner at the lodge of the park and opening loads of presents and visiting with relatives.  The kids were very well behaved at Beth’s mom’s house and at Aunt Carole’s house, where we stayed with Uncle Johnny and Aunt Abby.  There are no other children in the family so they often had to amuse themselves quietly while the grownups talked about boring grownup things.  They were also well behaved on the drive home Thursday, thanks to a headphone splitter that allowed them to listen to the same audiobooks together.

Friday Beth went into the office for a few hours and all hell broke loose soon after she left. Believe it or not, the kids had a fight that ranged over a half hour about toilet paper.  Yes, toilet paper. More specifically, about how many rolls from the recently delivered case that was sitting in the living room each of them would carry to the basement for storage and how they would alternate their trips.  It was a surprisingly explosive argument. There was pushing and crying on both sides. I don’t put the kids in time out very often anymore, but I didn’t think this was going to be settled without some enforced separation first, so I sent June to her room for six and a half minutes, and Noah to mine for eleven and half minutes.  When the time had elapsed I told them they were free to try to work it out again but if they couldn’t do it peaceably I would decide who was carrying the toilet paper downstairs.

They were calmer after the break, and slowly, painfully they worked out a mutually acceptable arrangement.  A couple of times tempers started to flare, but they’d check themselves. At one point June suggested they just let me decide but Noah was afraid I’d say I was going to carry it all downstairs by myself (for the record, this is not what I would have said) and they persevered.

Later that morning June had a play date that was—how shall I say?—more high-spirited than usual.  I was reading the last chapter of The Golden Compass to Noah when June and her friend snuck into the room and started to pelt him with plastic Noah’s ark animals. Because he stooped to their level and started throwing them back I told him he’d just have to read the last two pages of the book on his own.  This upset him considerably more than I thought it would and for the second time that morning he was in tears. He was tired, we all were after five nights sleeping in the same room, and he was sick, too, with a head cold, and I guess he just didn’t have much emotional resilience.  When June’s friend left he asked me to cook lunch with him and I was on the verge of saying no, I just wanted to fix something quick, but then I thought better of it. He likes to cook with me and it is vacation still.  We made egg noodles with sautéed spinach, garlic, thyme, Parmesan, and almonds.

I needed to go to the library and thought it might be good to get the kids separated, so I took June and left Noah, with instructions to practice percussion while we were gone.  I also decided to walk, rather than take the bus in case pent-up energy after a long car ride the day before was part of the problem.

We returned around 2:15 to find Beth home from work. June watched Angelina Ballerina before the four of us set out for Rockville to get a marriage license.  The kids were loud in the car, not arguing exactly but chanting a nonsense poem and coming right up to the edge of argument over and over.

We found the building we needed and the office inside it, a drab bureaucratic suite I don’t think anyone ever would have characterized as a cheery place. There were signs noting that marriage licenses are non-refundable and it is forbidden to throw rice in the marriage room.  (Noah was not familiar with this tradition and was somewhat baffled by the sign until I explained.) Nonetheless, it felt cheery, sitting there along with several straight couples and two other lesbian couples. I wasn’t surprised that two out of three lesbian couples had kids (besides us there was a thirty-something couple with a baby) because many of us have waited long enough for marriage to have established families already.  Oddly, though, most of the straight couples had kids, too, ranging from preschoolers to teens. The oldest girl there was developmentally delayed and just over the moon to see her parents (or a parent and a stepparent?) getting ready to tie the knot.  A small wedding party exited the marriage room while we were there and a guest for another wedding arrived only to discover he was in the wrong place or there at the wrong time, because there was no wedding scheduled for the parties he named. (I wondered if someone got jilted and all the guests but one were notified.)

While we were there I realized that because gay weddings can be performed starting on New Years’ Day and there’s a 48-hour waiting period for everyone and were there the last business day of the year (December 28), it was also the very last day gay couples would have any longer to wait after getting a license than straight people.  Somehow that brought the equality part of marriage equality home.

Once it was our turn, we were called into a cubicle where we showed identification, signed papers and received more forms for the celebrant to submit once we’re married.  We were issued a pamphlet on family planning (though we’ve really got that covered).  Glancing at the kids, the official acknowledged we probably didn’t need it and complemented the kids on their good behavior. (They are well-behaved much of the time.) And then it was finished and we went to the Container Store to buy June a big basket for her dress-up clothes and then out for pizza at Matchbox. On the way home we saw the full moon rise, huge and white, and low in the sky. It was lovely.

The next day we had another excursion, to Baltimore to meet up with my mom, who’s moving out of her house in the Philadelphia area in less than two weeks.  She and my stepfather will take a trip to Peru and then they’re heading West, to stay with her sister in Idaho and finally, in late February Mom and Jim will move into their new house in Oregon.  Mom is in a frenzy trying to sell her furniture and get her packing done.  We’d planned to have lunch in Baltimore and then go to the American Visionary Art Museum but between traffic, heavy snow and getting lost, we didn’t meet up at the restaurant until almost two hours after we’d planned. While we were waiting for Mom to arrive we wandered around the Inner Harbor in the snow, played the big metallophones we found there (think xylophones made of hollow metal tubes), and then we went into Barnes and Noble where we sipped coffee and milk, and watched the snow fall into the canals and browsed.

Because of the late start to our visit, Mom decided to skip the museum.  Still, we had a very nice lunch, and we discussed her upcoming plans and the latest twist and turns in my sister’s adoption quest. Mom gave me a bag full of old stories and poems I’d written as a kid, plus report cards and photographs and other mementos she came across while packing.  After we parted, we made a quick visit to the museum where we admired fairy houses made of natural materials on rotating platforms, kinetic sculptures, a big glass case of Pez dispensers, a dinosaur sculpture made of antique toys and obsolete technology, and a giant elephant with a mustache wearing a sombrero.  I was sad, so whimsy seemed a good antidote. The sun was setting over the harbor as we drove home, turning the windows of the old brick Domino Sugar plant to a fiery gold.

It’s natural to think about beginnings and endings this time of year.  It’s phases of relationships that are starting and ending of course, rather than the relationships themselves. I’d be surprised if Beth’s and my married life is much different than our long courtship has been, and Mom promises to come East to see us two or three times a year. Still, these are real changes. And as always with kids, there’s something new on the horizon.  Noah was invited to join the sixth grade Honors Band this winter (musicians were chosen from ten middle schools) and practice starts Thursday. The next day basketball season starts for June. It’s time to ring out the old and ring in the new.