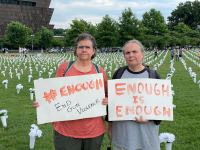 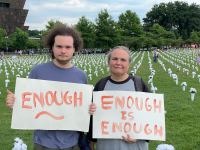 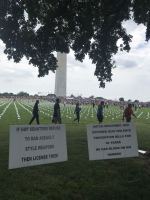 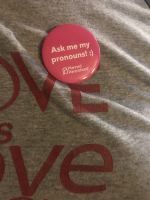 It was potentially quite a busy weekend. North had a lot on their social calendar and there was a March for Our Lives rally in response to the mass shootings in Buffalo and Uvalde on Saturday afternoon and it was Pride all weekend. In DC, there was a parade on Saturday and the street festival was Sunday, plus our little town was having its first-ever Pride festival on Sunday.

North’s friend Ranvita came over for our weekly pizza-and-movie night. Over pizza and mozzarella knots, North and Ranvita talked about the dialogue they needed to perform for their theater class the next week and whether or not they were going try to get off book. (Apparently, there was an option not to, but you couldn’t get an A on the assignment if you chose not to memorize the lines.)

Beth was working late, so it was just Noah, the two high schoolers, and me. We didn’t want Beth to miss one of the movies we’d communally selected to watch together as a family so we needed to pick a new one. We have a complex nomination-and-veto system for choosing movies and having to pick a new one that four people could agree on made me reflect on the genius of having an orderly system because picking a movie four people can agree on is hard. Well, it was really just three people because I think Ranvita was a little overwhelmed by us and she kept quiet. It was mostly North putting ideas out there and me rejecting them because they were unrated and it was too hard to know what objectionable content they might contain or Noah rejecting them because their Rotten Tomatoes score was too low.

Finally, we settled on one of Noah’s choices, Perfect Blue, an amine thriller that was rated 16+ on Common Sense Media. By this point, we’d spent so much time trying to decide on a movie that I didn’t look carefully at the details of the reviews and if I had, we might not have watched it with North’s friend who’s a year younger than they are and whose parents I don’t know at all. I liked it—it was very twisty and played with reality, fiction, dreams and hallucinations in an interesting, artsy way—but it was also quite violent and sexually explicit and some of the violence was sexual. But I do tend to be stricter about media than most of North’s friends’ parents, so I hope it didn’t scar her. She did keep saying, “That was not what I expected” afterward as we all tried to figure out the plot together.

After the movie was over and Beth had gotten home, but before Ranvita left, I saw Xander in the kitchen, dragging one of his back legs behind him. It seemed like he couldn’t move it at all. I alerted Beth and she pointed out that something like this had happened to him last summer and it only lasted about a half hour (the vet couldn’t explain it), so we waited and sure enough he made a full recovery. It’s worrying, though. As Beth said, having an elderly pet “is not for the faint of heart.” Someday it won’t be a false alarm, but that day was not this weekend.

Beth, Noah, and I left for the rally late Saturday morning. I’d gone through the hand-painted signs we’ve kept from previous marches and rallies and found some gun control ones we could re-use. I hesitated over the more all-purpose “America Is Better Than This,” sign I made for some early Trump administration protest (I think it was immigration and the Muslim ban). I’d actually made it thinking I would re-use it, but I never did. The sad truth is while I got to fifty years old believing that, at fifty-five, I don’t anymore. Too many of my fellow Americans, including members of my extended family on both sides, watched the cruelty and corruption of the Trump years and didn’t flinch. But I do still believe in the power of protest and the ballot, so that’s why I still go to rallies and write get-out-the-vote postcards.

Beth wore an orange top and I thought about it, but even though I have two, they are both short-sleeved and the day was drizzly and unseasonably cool, so I went with a long-sleeved shirt that says Love is Love is Love on the front. It occurred to me that someone seeing it might think I was heading to Pride. We saw people obviously going to one event or the other on the Metro. In fact, in the Takoma Metro parking lot, we saw a woman I thought was probably going from the rally straight to Pride because her outfit was mostly orange, but she had a rainbow flag draped over her shoulders like a cape.

We arrived at the rally around 12:15. There was a timer at the bottom of the Jumbotron screen indicating the speeches had been going on for ten minutes or so. We missed X González but we heard plenty of speeches. We heard two sons of an eighty-six-year-old woman who died in the supermarket in Buffalo, and we heard the mayor of DC, and two young people, one who introduced and praised the mayor for her efforts on gun control and one who criticized those same efforts.

The most powerful speech, of those we saw anyway, was David Hogg, of Marjorie Stoneman Douglass. He’s an electrifying speaker. What I appreciated most about his speech was his focus on the many state-level gun control victories there have been since the Parkland shooting, including some in Florida. It’s so easy to think nothing has changed and despair, but there has been incremental progress. It made me think I really should get back to my postcard writing, which I’ve let lapse a bit. When he finished I was thinking of visiting the line of Porta-potties because I didn’t think it was going to get any better than that, but Representative Cori Bush was next with a gripping account of being a survivor of gun violence in the context of domestic violence, so I was glad I stayed for that.

During her speech, the timer stopped at 78 minutes and after she’d finished, it was announced that was how long it took for police to stop the gunman at Robb Elementary. It was an effective demonstration of how long that must have felt to the terrified children, teachers, and staff inside the building.

There was a moment of silence, but suddenly in the middle of it, people started running away from the stage. We hadn’t seen or heard what sparked it, but we ran, too, until someone from the stage implored people to stop running and said there was no threat. I didn’t find out what had happened until later, but apparently, a counter protester (I hadn’t even seen there was a counter protest—we must have been too far away) had jumped over the barrier, yelled, “I am the gun!” and threw something into the crowd. He was detained by park police and the speeches continued after that, but I saw several people crying immediately afterward and I noticed they were all kids or teens. It made me think how a lot of kids my kids’ age are traumatized by the ever-present specter of gun violence, as we hear about school shooting after school shooting. (I guess the equivalent for 80s teens was nuclear war. I was pretty much convinced there was going to be one when I was in high school, but the obvious difference is we never did have one.) It actually made me glad North did not attend the rally because two summers ago witnessing a car crash into our fence as they stood just feet away was one several factors that may have triggered their functional neurological disorder and left them partly paralyzed for months.

We didn’t stay much longer after that, because Beth needed to get back home and drive North to their friend Marisa’s birthday party. We took pictures by a field of bouquets of white and orange flowers, each of which presumably stood for some number of lives lost to gun violence. Part of the way to the Metro station, Noah and I peeled off because he wanted to stop for lunch. I’d eaten before we left, but I accompanied him to Corner Bakery and got an iced latte and a cookie—I ate half of it and saved the rest for later—and he got a sandwich, chips, and a muffin. The restaurant was filled with people in March for Our Lives t-shirts and others in rainbow gear.

If North hadn’t had a birthday party to attend it might have been nice to go from the rally to the Pride parade and meet up with them there. Pride was cancelled the past two years because of covid, but the two years before that we went to the festival and I thought the parade would have been a nice change of pace.

Noah and I came home and made a soba noodle-vegetable salad with peanut sauce for dinner together. North came home in time to watch half of O Brother Where Art Thou, after they plucked the index card with its title from the pile of approved films.

Sunday morning, we were still undecided about Pride. Thunderstorms were predicted and Takoma Pride was postponed for two weeks hence. North was all for going to the DC festival, which had not cancelled, but Beth and I were unenthused about the idea of going to Pride in a downpour and she had work she needed to do, so she and I stayed home and North went alone to meet up with their friend Sol there. North has the same Love Is Love Is Love shirt I do (they were Christmas gifts from my mother years ago) and they actually did wear theirs to Pride.

As it turned out, it never stormed and they were able to stay a few hours. Apparently the kids had trouble finding it, initially going to the right address in the wrong quadrant of the city, but they managed on their own without calling for adult backup. North was using their wheelchair that day, as was Sol, which makes that feat more impressive. They said they had fun. They didn’t bring home too many tchotchkes, but they did pick up a tube of lip balm that looks like a tampon (which they are quite taken with it) and a new button.

I’m glad they went and I hope to go to Takoma’s smaller Pride celebration in two weeks. It’s another way of witnessing and standing up for our lives.