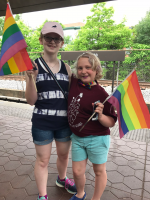 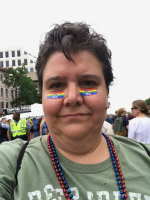 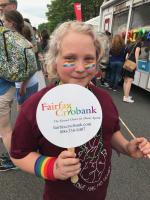 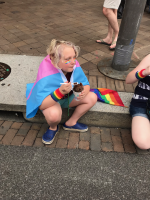 From “Cyprus Avenue,” by Van Morrison

We went to Pride last weekend, which we hadn’t done in eleven years. The last time we went I wrote about how I’d gotten a little jaded about Pride over the years but how marching in the parade with the kids made me see it through my six-year-old son’s eyes and brought some of the wonder back to it. This time I saw it through my twelve-year-old non-binary child’s eyes.

DC Pride has two components, the parade and the festival. The last time we went we marched in the parade but this time we went to the festival instead, partly because we had plans on Saturday. It was a jam-packed and very social weekend for North. Saturday afternoon we went to see West Side Story, because North knew some of the actors in it. We had an extra ticket because Noah was too overwhelmed with homework to use his, so North invited their friend Leila, who’s a big fan of Romeo and Juliet (and came to see North in it last month). This was a lot of fun. I like that play and it was a good production. After we dropped Leila off at her house, we took North straight to Evie’s house for a Harry Potter-themed birthday sleepover. When Evie’s dad opened the door in a cape, I remembered costumes were encouraged and even though North had located a robe and a tie ahead of time, they had neglected to bring them to the party. I offered to go home and get the costume, but they declined. Shortly after we got home, we took Noah out for Italian and then ice cream.

Saturday morning after Beth went grocery shopping and North got home from Evie’s, we picked Megan up and headed into the city. North was so excited they wanted to be there as close to the noon starting time as possible, so Beth and North skipped church that morning. North predicted we’d see a lot of people headed for Pride on the Metro. We were the only obvious ones at the Takoma stop and on the red line (we had two rainbow flags and an HRC flag between us) but there was a pack of teenage girls with rainbow glitter on their faces and rainbow ribbons in their hair once we got onto the green line.

North was wearing their Rainbow Alliance t-shirt—after long consideration of which of their three LGBT-themed shirts to wear, they decided it was likely to be the most unique. I was wearing a shirt from the 1993 March on Washington with the HRCF torch. That’s HRC’s old name and logo, you whippersnappers. (Also, get off my lawn.) I was going for an old-school “I was gay before it was cool” look, I told Beth. Beth wasn’t wearing anything identifiably gay. “You aren’t very rainbow,” I told her.

But we took care of that in short order. Before we even arrived at the festival, we received some free Mardi Gras beads and as the day went on we acquired free rainbow stickers and rainbow sweatbands. Someone also handed Megan a package of condoms. “What are these?” she asked us. Beth told her and I gently took them from her. After a few minutes elapsed, she said quietly, “Oh, I remember what those are for.”

Even though there were a lot of freebies, not everything was free. Over the course of a few hours, we bought and ate vegan shrimp and macaroni and cheese, an enormous dish of butterfly potatoes even the four of us couldn’t finish, shaved ice, ice cream, and funnel cake. Beth also bought North a big trans flag, from the many different kinds of flags on offer. We didn’t know what they all meant and spent some time guessing, “I think that one’s bisexual,” etc. If you’d like a guide to LGBT flags, you can find one here.  By the way, I guessed right about the bisexual one (out loud) and the asexual one (silently). I know you’re impressed with how hip and up-to-date I am.

Actually, Pride made both Beth and me feel a little old because it’s so different than it used to be. All through the nineties, we used to attend the festival when it fit (with room to spare) on the athletic field of a D.C. middle school. We always saw a lot of people we knew there, working at the booths or strolling around, and it had a festive, community feeling to it, sort of like the Fourth of July parade or the Folk Festival in Takoma Park. Now Pride stretches over several city blocks and the only people we saw that we knew there were, in kind of a funny twist, Leila’s family. It seems a little more impersonal now and a lot more corporate. Beth made herself feel better about this by stopping at the American Airlines booth where you were encouraged to write messages and leaving a pro-union message. (CWA represents the ticket agents at American.)

North wasn’t having any cynical thoughts, though. As I watched them sitting on a curb, eating a root beer shaved ice, wrapped in their flag like a cape and looking really happy, I thought about what a big year it’s been for them, being in middle school, acting in three shows, trying on a new identity. “This isn’t a sight I would have imagined a year ago,” I said to Beth. As surprising as North’s coming out as non-binary was (and continues to be for me), it’s now an important part of the story of their life.

So perhaps it was fitting that in between eating festival food, and people watching, and playing cornhole, and petting cats at the humane society adoption truck, we visited the booth of the sperm bank we used to begin that life. I wondered how many other parents of donor kids brought them by, maybe a lot, but the staff seemed pleased and proclaimed North “beautiful.” Of course, I agree, and I always will, no matter what flag they fly.