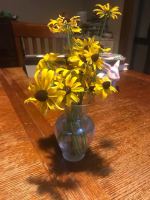 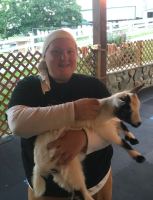 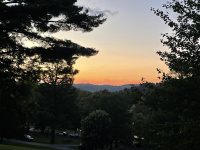 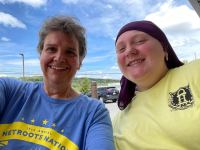 The week after our beach trip North was at camp and Beth was staying at her mom’s house in Wheeling while attending a convention in Pittsburgh, so Noah and I were on our own.

Beth and North left on Sunday morning. I was tired because I hadn’t slept well and a little melancholy to have gone from a group of eight to two in the space of twenty-four hours. But I managed to occupy myself. I went to the farmers’ market, tended to load after load of trip laundry (there were four total), and spent a long time reading the Sunday paper. Noah and I read A Desolation Called Peace and watched The Strain, as we did almost every day. (Later in the week we also watched Midsommar and The Babadook.)

Monday I got back to work, outlining some web copy for a supplement company, and took advantage of the cool weather to weed the Black-Eyed Susan patch in our front yard, making a bouquet with the flowers I pulled up accidentally. The weather was relatively cool from the weekend through Thursday, which was a welcome relief from the two weeks of miserably hot and humid weather we had before leaving for the beach.

Heatwave flashbacks: One day in late July Beth and I went to the pool but after just ten laps in the tepid water, I gave up on exercise and decided to sit in the shade in my damp bathing suit and read instead. Another day I found myself exhausted by a thirty-minute walk, which is on the short side for me. We found refuge from the heat in various ways. Beth and North went camping one weekend in the Catoctin mountains and the kids and I went to see Nope in an air-conditioned theater.

Sometimes I have a hard time knowing what to cook when Beth’s out of town, but we brought a lot of vegetables back from the beach, because we were driving and had a cooler while everyone else was flying, and some of these vegetables were nearing the end of their useful life, so I focused on those. I made tomato-dill soup on Monday with two going-soft tomatoes and dill from a plant that went wild while we were gone, a veggie stir-fry on Tuesday, and an assortment of raw and steamed vegetables with Sara and Dave’s peanut sauce on Wednesday. We had abundant leftovers of all those meals—apparently I don’t know how to cook for two– so we ate some of those on Thursday and we got pizza on Friday and ate still more leftovers on Saturday.

Meanwhile, Noah was occupied with finding an apartment and other matters he needed to attend to before he leaves for Australia in a week and a half. There have been a lot of bureaucratic difficulties he’s had to navigate this summer, more than I remember having to deal with when I studied abroad in college. Here are a few:

Finally late Sunday afternoon, a week after they’d left, Beth and North returned. That morning I went to the farmers’ market again to get peaches and in the afternoon I made a cobbler to welcome them home. I adjusted my usual recipe, subbing almond flour for half of the whole-wheat to reduce carbs.  It didn’t come out the way I hoped, but everyone ate it when I told them they didn’t have to, so I guess it wasn’t too bad. When Beth and North went camping in July I welcomed them home with an (almost) no-sugar blackberry cheesecake. I don’t bake as much as I used to, partly because North bakes so much and partly because of my diabetes, but I do like to celebrate our reunions with dessert, especially in the summer, when there’s such a bounty of fruit. That night for dinner, Noah and I also made whole-wheat spaghetti with cherry tomatoes, basil, and fresh mozzarella. It was nice to eat a meal all together.

North was full of stories about camp. The sixteen- and seventeen-year-old kids are in a different group than the regular campers. They go on a lot of field trips—to visit a museum about Amish culture, do goat yoga (which North says is “cheering”), go Hershey Park (where North rode the biggest coaster in the park) and an escape room complex (where the group managed to escape from both rooms they tried) and go shopping at a mall (North came home with a lot of earrings). But they also participated in leadership seminars where they learned skills such as how to facilitate a meeting. They also did normal camp things like attending the all-camp campfire, swimming, and making a tie-dye pillowcase.

Beth spent her time away working first at her mom’s house in Wheeling and then at the Netroots Nation convention in Pittsburgh, but she found time to hang out with an old friend, too. (She took the sunset picture in Wheeling.)

Finally, I have good news and very sad news. For everyone who had well wishes for my cousin’s daughter Annabelle, thank you. She came off the ventilator a week ago today and is home and well. But my mom’s boyfriend Jon, who was also hospitalized while we were at the beach and was supposed to be released last Tuesday, took a turn for the worse and by Wednesday he was in the ICU with a bacterial infection, viral encephalitis, and kidney failure. The doctors said he almost certainly wasn’t going to make it, so on Thursday evening, following his wishes and those of his adult children, he was moved to hospice care at home. He died early Friday morning, surrounded by his kids. My sister, brother-in-law, and niece (who moved to Davis, California last month) all traveled to Ashland to be with my mom for a few days to comfort her.

I never met Jon, but I know a little about him. He was well read, loved opera, and played the tuba. He was married twice and had two children, two stepchildren, and two grandchildren. He lived down the street from my mother and they had dinner together every night, plus breakfast on Sundays. They traveled together often, everything from a trip to the Olympic peninsula to an African safari. They were considering Mexico or Costa Rica as their next destination. My mom will miss his companionship terribly, but she said they had “four wonderful years together.” That’s no small thing.