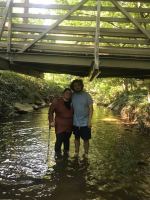 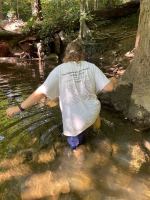 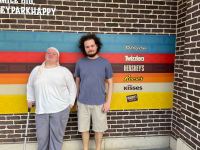 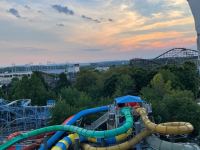 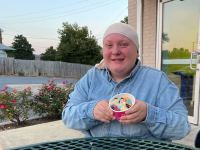 North had one week between camp and the start of the school year. They didn’t have any babysitting jobs or social engagements, though they did go to school on Thursday evening to staff a table for the GSA at the picnic to welcome incoming ninth graders and other new students. North is going to have a leadership role in the GSA this year and building membership is one of the organization’s goals. They said it was a success. They talked to a lot of people, got ten signups, and talked to a faculty member about the campaign to replace the annual powderpuff football game with something less sexist.

On Wednesday afternoon, the kids and I went on a creek walk, which we do almost every summer, usually near the end. Occasionally these outings end in mishap, as when I fell and hurt my knee six years ago (it has never been quite right since then) or when Noah got fifteen bee stings last summer, which is why Beth urged us to “Be careful!” when we left shortly before three. We promised we would be.

We walked Starbucks for refreshments and then we made our way to the creek. It was quite pleasant. No one got hurt and it was nice to be in the water on a warm day. We found some deep places, where North submerged themselves almost completely by sitting on the creek bed and we walked further than I thought they’d want to, all the way to the bridge closest to our house. We would have gone under to arrive at our side of the street—it’s always kind of cool to be under the street, or I think it is—but North spied a man under the bridge who seemed to be relieving himself, so we gave him some privacy and backtracked until we came to a place that was clear enough of underbrush to get out onto the path and walk home that way. Walking in the creek always makes me nostalgic for when the kids were younger and used to pretend there were trolls under the footbridge where we typically start. Even if that sort of imaginative embellishment is in the past, I’m glad neither of them feels too old for this activity.

Friday afternoon Beth and I quit work early and we all piled into the car to drive to Hershey Park for one last, quick trip of the summer. We arrived in time to check into our hotel and spend a couple hours in the park. We got pizza for dinner, rode a few rides, and everyone but me got desserts, either ice cream or in North’s case a chocolate-covered frozen banana. (I would have ice cream the next day, when I was able to space it apart from other carbs.) We got two rooms so the kids could have their own space and we could have ours. We also had a king-sized bed and a fancy shower that didn’t have a curtain or wall because it was big enough to have its own entryway. It was deluxe.

We said goodnight to the kids and told them to be ready to leave the hotel at 9:30 the next morning. The park doesn’t open until eleven, so we thought we’d do the factory tour ride at Chocolate World beforehand because it opens earlier. Beth and I went down to the hotel breakfast bar around eight, but there wasn’t a single thing I could eat, at least not in the morning when my metabolism is very reactive. The vegetarian fare was all muffins, waffles, flavored yogurt, and a couple unappealing looking apples. Beth got a little container of vanilla yogurt and some juice. We’d decided to go to a nearby grocery store in search of food, but there was a Starbucks in the parking lot so I was able to get a latte, kale and mushroom egg bites, and some string cheese, which I supplemented with some mixed nuts I’d brought with me, while Beth picked up a few items for herself at the grocery store.

We got to Chocolate World a little before ten. I expected we’d be in a very small minority of people masking indoors and we were, but it was even fewer people than I would have guessed, almost no one, even in crowded spaces where you stand near the same people for a long time (for instance in the line for the factory ride).

Shortly before eleven we left Chocolate World and got a wheelchair for North from customer service. They used one when they went to Hershey Park on a camp field trip earlier in the month and wanted one because it would be a long day of walking. They also had a pass for expedited entry on some rides, which hadn’t expired yet. We were able to accompany them and avoid the lines. The way it works is you can enter your first ride of the day without a wait and then the ride attendant writes on the pass how long you have to wait before entering another ride. It’s based on the average wait time for that ride. As North said, “you wait after instead of before.” It saves you from having to stand in line if that’s difficult for you and it also saves some time because you can use your wait time for getting to the next ride or eating or going to the bathroom.

So there were some advantages to using the chair and the pass, but also some disadvantages. It was work pushing it uphill (Beth, Noah, and I took turns) and we often had to split up and leave someone behind to watch the chair. We only did this later in the day because of what happened while the kids and I were riding the smaller of the two flume rides. We left the chair at the bottom of a staircase, and three teenage boys stole it. Beth, who was waiting outside the ride, actually saw them leave with it, and she wondered if it could be North’s, but she wasn’t sure, so she didn’t confront them. It wasn’t until we got off the ride and found it missing that we all realized what had happened. Beth texted security and they tracked down the culprits and returned the chair before our kids had even returned from their next ride.

It was a busy day. We made a list of rides we wanted to do in the morning but as the day progressed, we had to keep paring it down. I was sorry that we skipped the mine ride because it’s one Beth will do. She is the least adventurous of us at amusement parks and as of this summer I am the second least. When North was at Hershey Park during camp, they rode the Candymonium,  the newest and biggest coaster in the park, which at 210 feet, is just a little taller than the biggest coaster I’ve ever ridden, the Magnum at Cedar Point. (I have not been on that coaster since I was twenty-two, for the record.) Given the fact that Noah rode the Great Bear, his first big coaster, on a band field trip in middle school makes me think that being with peers and not your parents makes you more daring when it comes to amusement park rides (and other things of course, for good and for ill).

North tried the Great Bear this year for the first time, Noah rode the Candymonium with North, and the two of them also did the bigger of the two flume rides for the first time. As the kids pointed out, it’s because they keep adding rides that we can’t find time for all our favorites in one evening and one day anymore. The kids and I also rode the Wild Mouse, the Comet, the smaller of the three wooden coasters in the park, and the Sooper Dooper Looper, the smallest looping coaster. It has just one loop, but it was one of the first looping coasters ever built, so it has historic significance. These rides are at the very edge of my own comfort zone. (After some consideration the day before about whether I didn’t want to be the kind of person who wears my tie-dyed Sooper Dooper Looper t-shirt while riding the Sooper Dooper Looper or whether that’s exactly the kind of person I wanted to be, I went with the latter.) We all rode the swings and the Ferris Wheel, which is Beth’s favorite. She took the picture of the park from up there.

We also went to the waterpark, but the lines were so long we gave up on doing a waterslide or the lazy river, but the wave pool had no line or just a short one when different members of our party arrived. It was nice to get wet, though, because by late afternoon we were all hot and tired. Beth and I took turns watching the wheelchair so everyone could go into the pool.

As we left the park, North took one last ride on the Candymonium while Beth returned the wheelchair and Noah and I did some shopping at Chocolate World. We were intending to eat dinner there, but the place we usually eat—it has several vegetable side dishes you can use to make a meal—was closed and the only option was pizza. Neither Beth nor I wanted pizza two nights in a row, so we went to Panera before hitting the road for home.

There wasn’t much traffic, so we were home by 10:15, which was good because Beth and I are usually in bed by ten and because Noah had scheduled a call about another place to live in Australia at eleven. If you’re thinking, wait, I thought he found somewhere to live, that fell through. This one is a room in a house where the owner also lives, a ten to twenty-minute walk to campus. He was offered the place on the phone and accepted, but he hasn’t paid the deposit yet, so I’m still a little nervous about it. Meanwhile he has an AirBnB booked for his first week and we’re not cancelling it quite yet, just in case.

Sunday evening, after we enjoyed a nice summery dinner of barbequed tofu, fried okra, corn on the cob, and sliced tomatoes that Beth cooked, we went to Sweet Frog. We’ve always taken the kids out for ice cream (or occasionally frozen yogurt) on the night before school starts. It’s something my mom used to do for me and my sister and the tradition continues.

I finished first, having taken a relatively small amount of soft serve from the dispenser. I got up and walked up and down the block because I was short on steps, and when I returned Beth got up and did something similar because she was short on activity minutes. When she returned, she showed us that her Apple watch told her she’d had “a perfect week.” I’m not sure North would agree that a week brought their summer break to an end was a perfect one, plus we weren’t at the beach, but we were all together after a week split up into three groups and on the cusp of a longer separation from Noah, and we got to enjoy natural and not so natural amusements, so I’d say it was pretty near perfect.