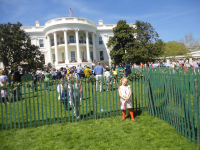 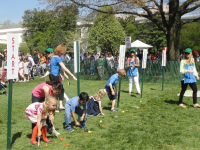 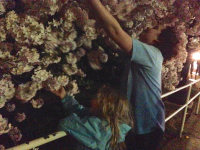 Have I mentioned we had ten snow days this year, six over the limit of built-in school days and the school district is only making up two? I have?  Oh, yes, of course. What I haven’t mentioned is that despite the fact that there are five contingency days clearly scheduled on a calendar sent home at the beginning of every year, that when the school district decided to make up the measly two days, only one of those two make-up days was on one of the contingency days?  The other one came out of spring break.

Now it could have been worse, we could have been faced with the horrifying prospect of school in session while we had a beach house rented, but it was just the tag end of spring break, Easter Monday, which fell two days after our return.  But the fact remained that Beth had made an orthodontist appointment and a dentist appointment for Noah on Monday and June had more exciting plans, in the form of two tickets for the White House Easter Egg Roll Beth received from a colleague.

We decided to stick with our plans and kept Noah out of school. June went to school in the morning, but I picked her up around noon to take her into the city.  So despite my letters to the superintendent of schools and to state officials about how the school year should be extended, I ended up in the seemingly hypocritical position of only sending one kid to school for a half day on the first make-up day.

But perhaps you wanted to hear something about the Easter Egg Roll itself?

Crowded would be one description. While we were standing in one of many lines I heard someone say there were thirty thousand people there. I checked later and it’s true, although they weren’t all at once—thirty thousand tickets were issued in five time slots. We were in the fourth slot, 2:30-4:30.  After a picnic lunch outside the Takoma Metro stop where Beth dropped us off en route to Noah’s dentist appointment and a train ride into the city, we arrived at the Ellipse and got into line around 1:40. I did consult my map when we got off the Metro, but if I’d misplaced it I could have just as easily followed the hoards of dressed up children heading in the direction of the White House.

It took an hour and ten minutes to go through security, get our wristbands, and wait in line to enter the South Lawn.  As we inched along, I read How to Cheat A Dragon’s Curse to June until we got closer to the front of the line where music was playing and it was no longer possible to read without raising my voice. As we approached the White House June wanted to know exactly when we’d crossed into White House property. We were walking along the sidewalk, next to a wrought iron fence and I told her the squirrel on the other side was on the White House lawn. She seemed thrilled to be that close.

Once we got inside we had to choose from all kinds of activities, but we headed straight for the Egg Roll itself because that’s the classic event and our time was limited. The line there was pretty short and soon June was pushing an egg across the grass with a long wooden spoon right in front of the South Portico of the White House.  Next we headed for the snack area where we shared an apple, some baby carrots in a kefir dipping sauce, and bottled strawberry-kiwi smoothies. We peeked at the White House vegetable garden and noticed that their kale is doing better than ours.

June had a hard time deciding between the story-telling stage where Miss America would be reading stories or the obstacle course. We stood in line for ten minutes outside the roped off storytelling area before realizing that at the rate it the line was moving (not at all) we’d be admitted after Miss America was finished and Debbie Reynolds had begun and as June had no idea who Debbie Reynolds was, we left the line and headed for the obstacle course.

Next we headed to a booth where she did a science experiment, making hypotheses about which objects from a jumble on the table would sink and which would float in a tub of water and then testing her hypotheses and filling out a checklist of her results.  By the time she finished, it was time to hit the restrooms and get in line again to exit.  We were issued a box of Peeps and a commemorative wooden Easter egg as we left.

It had been fun and exciting but also kind of exhausting between the sun and the crowds so when June asked if she could get a soft pretzel from a street vendor the idea of sitting down on the grass and eating seemed attractive so I bought it for her and an eggroll for myself before we got back on the Metro and headed home.

I’m glad we went, though, because although we’ve been to the White House several times—once for a Christmas tour pre-kids, once on a regular tour when June was in preschool (“All The Presidents’ Pictures,” October 19, 2010), and once for a garden tour a year later-—we’ve never been to the Easter Egg Roll and it’s an iconic Washington springtime event, just like the cherry blossoms.

We did go to see the blossoms this year, the Friday before we left for the beach.  They are often a logistical challenge, mainly because of the short peak bloom period, which is difficult to predict more than a few days ahead of time, and parking issues.  We ended up going in the evening after June’s violin recital and pizza dinner because Saturday was busy with June’s kung fu lesson and packing for the beach. It was a hurried trip and not ideal in some ways, but beautiful as always. And the kids did seem to enjoy the novelty of going at night. As we left Noah surprised me by saying, “This was fun. We should do this more often.” I pointed out we go every year. “No, in the dark, in the rain,” he said.

I probably wouldn’t want to go the Easter Egg Roll every year, even if such a thing were possible and it isn’t; most people who go win their tickets in an online lottery, which is a better system than we first moved to the Washington area and I’d read in the newspaper about people camping out overnight in line for tickets. I might also need to give up the tradition of always going to the cherry blossoms, because it is hard to manage some years, especially for Beth, who has to drive and park if we don’t end up taking the Metro. Still, I do feel fortunate to live here, among the symbols of democracy and the fragile pink and white blossoms that herald the arrival of spring each year.