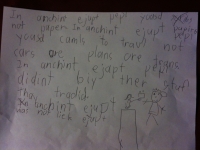 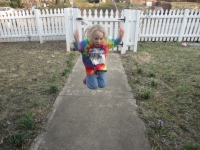 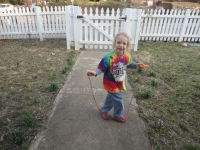 Yesterday morning, after snuggling between Beth and me in bed for a while, June wanted me to read Are You My Mother? to her. I said I needed to use the bathroom first.  When I came back, June was reading it to Beth.  I thought she might tire after a page or two and hand it to me to finish, but she read the whole book.  All sixty-four pages as she pointed out repeatedly, until she flipped to the last page, saw it was an illustration and scrupulously amended her count to sixty-three pages. Her reading was fluent at times, halting at others.  She got tripped up on predictable words like “could” and “right.”  It is never so clear that English pronunciation makes no sense at all as when you have a new reader.

So I guess it’s official. June’s a reader now.  (And she’s not content with picture books either. She’s been trying to read Pippi Longstocking for the past few weeks, at the rate of about a page a day, and with questionable comprehension.)

She’s also a writer. Over the course of the school year she’s had the same homework assignment many times: Draw a picture of something that starts with a given letter and write a sentence about it.  Then a few weeks ago, Señora T upped the ante. The new assignment was: Draw something that starts with the letter Q and write two or more sentences about it.  Well, June latched right onto the “or more” part.  She wrote: “El quetzal es un pajaro. El quetzal puede volar. El quetzal es muchos colores.” (“The quetzal is a bird. The quetzal can fly. The quetzal is many colors.”)  Then pointed out she’d written three sentences and in case I hadn’t noticed, she informed me, “Three is more than two.” About a week later she got the same assignment for the letter Z and three sentences about carrots followed. On the back of booklet of coloring pages about parts of a snowman, she wrote the following impromptu composition, which was not assigned: “El invierno es divertido. mi mama no le gusta el nieve. mi otro mama si le gusta el nieve.” (“Winter is fun. my mom doesn’t like the snow. my other mom does like the snow.”) She drew a picture of the three of us in the snow, Beth and June smiling, me frowning.  For this she received a star next to the smiley face that denotes completed work.  The star is for extra effort.  But my favorite piece of recent writing is her essay on ancient Egypt.  This wasn’t schoolwork– she did it at home, after I read her a book on the topic. If you click on the photo it will enlarge.

Some years are almost magic when you’re raising kids.  The year from one to two is a favorite of mine.  At the beginning, you have a baby who maybe knows a few words and doesn’t walk and at the end you have a running, jumping, climbing chatterbox.  When Noah was around two one of the teachers at his day care asked another if he spoke in sentences yet and his teacher answered, “He speaks in paragraphs.” Both of my kids have been pretty much like that.  The kindergarten year is another notable one.  This is what my kids do that year: they start going to school full time, they acquire a life that’s separate from me, they learn to speak Spanish, and they learn to read in English and Spanish.  The Spanish immersion program at June’s school is full-day in kindergarten (it switches to half-day in first grade) so she is not receiving any formal instruction in reading in English, but it doesn’t seem to matter.  Being taught to read in another language seemed to flip the switch for her just as it did for Noah, in both cases right before their sixth birthdays. Kindergarten is a year of leaps.

June’s learning things outside of school, too.  Basketball is over, and June never became one of the more skilled players on her team, which finished the season with a 0-8 record. But she did improve and as competitive as she is sometimes, she seems satisfied with that. She made her only basket of the season in practice last Friday night and she was stoked.  (And I missed it because I glanced away while talking to another mom!) Her yoga teacher is full of praise for how “focused” and “serious” she is and June can do a pretty impressive split now. She’s recently taught herself how to pump on the swings and doesn’t even need a starting push any more.

I knew she could do this because Beth took June to the playground over the weekend and she mentioned it, but I got to see it firsthand yesterday. We stopped at the playground for about twenty minutes on our way home from yoga.  I went to sit on a bench and started digging through the papers in her backpack while she went down the slides.  Then I glanced up and saw her on the swing, sailing through air, her legs in their pink leggings pointed toward the sky.  I hadn’t even noticed her get on the swing.

She can also jump rope.  They were doing a jump-roping fundraiser for the American Heart Association at her school and they focused on it for a few weeks in gym class leading up to it, and while she still gets tangled up in the rope, she gets more and more jumps completed in between the tangles. And now it’s one of her favorite things to do right before she gets on the school bus in the morning or after school.

Noah is teaching her to multiply, with half decent results. She clearly understands the concept even if her execution of it is shaky.  She’s also learning to tell jokes that make sense.  On the way to basketball practice every Friday evening for the last eight weeks, we got a ride with her coach Mike and there were usually at least three Pandas in the minivan.  They usually told jokes all the way there. Here is June’s new favorite, which she learned from Maggie:

June turned her calendar page to March this morning, even though she knew it was still February.  She’s gotten into the habit of crossing off the days but often she gets impatient and crosses off a day before it’s actually over.  That’s my girl, always looking ahead, always taking the next leap forward.