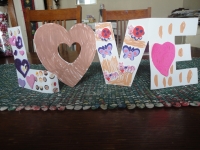 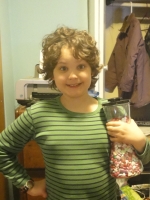 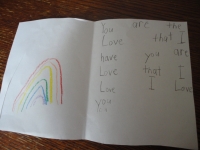 My new blogging program tells me this is my two-hundredth post.  It was also the blog’s fifth anniversary about a week ago.  When I started writing here, I had a kindergartener and an almost eleven-month-old baby.  Now I have a kindergartener and an almost eleven-year-old boy.  Five years ago I was also deep in mourning for the loss of my academic career, though I tried not to write too much about it. I wouldn’t say I’m over that loss by any means, although it’s better certainly, especially now that I have a fledgling freelance career. Five years ago my father was alive and Beth’s was, too.  That pain has receded a little as well. Daily life pulls us along, away from the past and away from pain.  Having kids makes you live in the now, and that’s often a good thing, especially on a day as sweet as Valentine’s Day.

Valentine’s Day is not my favorite holiday but I do like it.  On the first day of February, I posted on Facebook, “Steph has put a heart-shaped eraser on her desk and now considers her Valentine’s Day decorating complete. This holiday does not capture her imagination quite like Halloween, though she does like the candy.”  June’s preparations were somewhat more elaborate.  She drew hearts on strips of paper and taped them to the exterior walls of the house, one on either side of the front door.  She started making valentines some time in early January, storing them in a Clementine box she decorated with more strips of paper on which she drew rows of hearts and flowers.  Two weekends before the big day, Beth took her to a valentine-making activity at the public library where they had construction paper and doilies and foam letters which allowed her to make fancier valentines than the ones she made at home with the paper, crayons and scissors with which we supplied her. Despite getting an early start there was a production rush at the end, as she lost interest in the project for a few weeks in the middle.  Her cards to my mom, stepfather and sister went into the mail the day before Valentine’s Day, too late to arrive on time, and she was making the last few for her classmates over the weekend.

Noah decided not to make cards for his classmates (or anyone) this year.  Last year he did but many of the kids in of his class didn’t, so I suspect this year might have been the last year for a lot of kids. His class had a party and he did bring home valentines, from about half the class, mostly girls.  What he also brought home was a large tower of candy he won for guessing how many pieces it contains.  He guessed 958 and it had 1,027 small pieces of candy (a mix of Tootsie Rolls, Sweet Tart hearts, M&Ms, and Hershey’s kisses). June’s haul, consisting of a paper bag of candy from classmates and a box of conversation hearts from her after-school yoga teacher (devoured on the walk home), was considerably smaller, but it did contain a box of Darth Vader gummy heads, from a classmate named Luke, no less.

While the kids did homework, I put the finishing touches on the second draft of one of the grants I’m writing and sent it off.  The kids and I ate a dinner of tomato soup and grilled cheese sandwiches I cut into heart shapes with cookie cutters while we waited for Beth to come home. June said her sandwich was so beautiful she didn’t want to eat it. The kids hadn’t eaten much of their candy, but they were wound up nonetheless because they knew there would be gifts when she got home. I’d called Beth at 5:45, partly to see how close to home she was (Union Station was the answer) and I was on the verge of calling her again when she walked in the door around 6:35.  I ushered her into the bedroom so she could sign the valentines I’d bought for the kids and she ate her dinner, and then the great exchange of chocolate began.  There were chocolate-covered dried strawberries (a gift from Noah to the family), a chocolate heart, filled with wrapped chocolates (a gift from June to the family).  The kids got more conversation hearts and plastic hearts filled with M&Ms and June got a little Snow White figurine with two outfits, made of rubber.  (You stretch them onto her. It’s very odd.) Beth got me sea salt soap and sea salt caramels (very yummy). I wrote in her card that I’d secured babysitting for Saturday afternoon and suggested we see The Artist.

Soon after we’d opened everything there was a knock on the door. I was expecting canvassers or proselytizing Adventists (we live near a big Adventist church so we get a lot of that) but instead it was Zoli (formerly known as the Bobcat) and her mom who had come to hand-deliver a valentine to June.  We tried to give them some of our chocolate, unsuccessfully. I suspect there might have been a lot at their house, too. It’s a day of bounty, and not just in terms of sugar. It’s been that way consistently for me for a long time, and for that I feel very lucky.

I got a lot more than candy yesterday.  I had the chance to do meaningful work in a quiet house, a walk home from June’s yoga class through woods filled with purple crocuses, the treat of listening to June proudly read the words I wrote in her valentine, almost unassisted (and she probably could have read them all if my handwriting were better).  I have a date with Beth to anticipate.  At bedtime I got a hug and an “I love you,” from Noah.  And here’s what June wrote in my valentine: “You are the Love that I have you are Love that I Love I Love you.” Does it get much better than that?