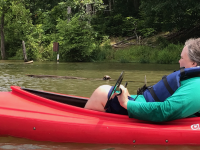 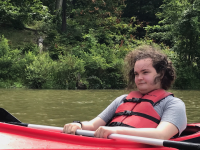 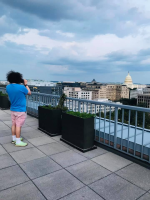 You just gotta ignite the sky, and let it shine
Just own the night like the 4th of July

We had a nice Fourth of July weekend. I hope you did, too, or a nice Canada Day weekend for the Canadians among you. But before I get to that…

An Update on Xander

Just five days after we took him to the animal hospital for his skin and ear infections, he gave us another scare. Wednesday morning right after Beth gave him his medicine, he fell down and seemed to lose control of his back legs. Well, this is exactly what happened to Matthew the day he died (and they were brothers), so Beth and I feared the worst.

Beth had been scheduled to go into her office but she let her colleagues know she wouldn’t be in and we were packing for a day in the animal hospital garage and debating whether we should wake the kids and ask if they wanted to come, when, after about a half hour of partial paralysis, Xander got up and started walking around as if nothing were wrong. Beth called and left a message for the animal hospital, explaining what had happened, and asking if we should bring him in. The answer was no, though of course, this doesn’t seem like a good sign for his general health. He had an appointment already scheduled at our regular vet’s office Friday, so we’ll see what the vet thinks then.

Meanwhile, almost a week has passed and he seems in good spirits. The infection on his stomach seemed to clear up, then it relapsed a little, but it still looks better than it did originally. The eardrops make his ears so greasy, it’s hard to tell if the crud is gone. He’s able to jump on and off the bed and climb stairs. He’s been going out into the yard occasionally to enjoy the sun and soaking up all the extra love and attention everyone is inexplicably bestowing on him. He’s always been an easy-going cat and he’s not letting the indignities of old age get to him.

Beth had a three-day weekend for the Fourth. She took up kayaking this spring and on Saturday morning, Noah and I went with her to Black Hills Regional Park to try our hands at it. Partly that’s because Beth wants to go on a dolphin-watching kayaking tour of the Chesapeake Bay when we’re at the beach later this month and I was unsure, having never kayaked, or maybe we did just once in our twenties or early thirties. Beth thinks we went canoeing on the Potomac. I thought it was kayaking on the C&O canal. Our youth is shrouded in mystery. The point is, if I’d ever been in kayak at all, the last time was more than twenty years ago.  Noah decided to come along, too, but North opted out. They attended a kayaking-and-canoeing themed week at Girl Scout camp when they were nine and thought they remembered it well enough.

It was a beautiful morning, sunny and remarkably mild for July, in the high seventies. The little lake was very busy with people in kayaks, canoes, rowboats, paddleboats, and paddleboards. It turns out Noah is a natural at kayaking. He got the hang of it right away. It took me longer. I found it tiring, and I was much slower than Beth and Noah, and I kept drifting to the right and needing to correct course.

We slipped through a tunnel under a berm to emerge in a smaller area where there were no other boaters. There were a lot of turtles, however, swimming and sunning on logs, and a family of geese, two adults and five half-grown goslings. There were also a lot of tree trunks poking up out of the water, because it’s an artificial lake that was flooded around thirty-five years ago. I think it would look eerie on an overcast day.

After we’d explored that area, we crossed back to the other side to go down a fork of the lake where Beth had seen a beavers’ dam on a previous outing. I was worn out, though, and didn’t think I could make it that far so I decided to rest at the mouth of the fork while Beth and Noah went ahead. (Neither of them ended up making it to the dam this time.) The wind sent me drifting further down the fork than I meant to go and I started to worry how I’d paddle out against the current, but when I turned around and started back, something clicked into place. I sat up straighter than I had when I’d been using the backrest and I found it easier to paddle. We were out of time, though, having rented the kayaks for two hours. I decided I’d like to come back and try it again before hitting the Bay in a kayak.

After we left the lake, we had lunch at Noodles & Company, and then ran a series of errands, including but not limited to stopping at Butler’s farm market for fruit, vegetables, pasta, and pastries, going to the animal hospital for a refill on Xander’s eardrops, and picking up my newly resoled Birks. It was a very nice outing.

Sunday was the Fourth. For the second year in a row there was no parade and no fireworks in Takoma. It was actually the third year for no fireworks because there have been renovations going on at the middle school that usually hosts the fireworks for that long and there’s no comparable open space anywhere in town. I wasn’t sure why the parade was cancelled, because our vaccination numbers in Montgomery County are very good—98% of seniors and 88% of everyone age twelve and up has had at least one shot. But Beth pointed out, the parade probably takes a long time to plan and when the call needed to be made, it wasn’t clear what things would look like in July. And of course, there are the under-twelves to consider.

However, there were fireworks in D.C. (There were fireworks there last year, too, but it seemed inadvisable to go to the mall.) So our plans for the day included a picnic dinner in our backyard and a trip downtown. There’s a good view from the roof of Beth’s office building and it was open this year, so that’s where we went.

Until dinner, the day was a pretty normal summer Sunday. Beth went grocery shopping and I put the groceries away. Beth worked in the garden, putting our zinnia seedlings and watermelon vines into the ground, and assembled most of the picnic dinner, while I made the deviled eggs and the sour cherry sauce for ice cream. We all missed Takoma’s quirky and spirited parade. Beth said it didn’t feel “like the Fourth of July” without it.

When we got to Beth’s office building we had a choice of two different levels and we chose the lower one. The penthouse deck has a portico design and Noah thought the columns might block our view. All the other CWA employees and their families chose the higher level, though, so we had the lower deck to ourselves. We got our chairs set up and Noah took pictures of the Capitol. We could see fireworks from various suburban municipalities and D.C. neighborhood displays all around us in a sort of panoramic effect.

The official D.C. fireworks began at 9:08, right on schedule. When they were in smiley face patterns the little kids up on the penthouse deck exclaimed and when they were in heart shapes they just about lost their minds. During some of the classic circle displays, one of them said, “It looks like the coronavirus” and then I couldn’t unsee it. Fortunately, the next few looked less spiky and more like dandelions. The display lasted about twenty minutes. On our way out of the building, I asked Beth if it seemed more like the Fourth of July, now that we’d seen fireworks, and she said yes.

On the drive home, we saw quite a few more neighborhood fireworks, and as we drove down North Capitol Street, we could see people setting them off on a side street. Noah played his Fourth of July playlist. It starts with Katy Perry’s “Firework,” but it grows every year. Beth and I sang along with Springsteen’s “Independence Day,” which may have been added for our benefit. Traffic wasn’t horrible, so by the time the playlist ended we were just blocks from home.

There was one day left in the weekend, so Beth and I had a date that lasted from late morning to late afternoon. We went to see the Rita Moreno documentary at AFI, which I recommend, and then out for arepas. The original plan was tapas, but that restaurant wasn’t open for lunch. We got tequeños (because Beth loves the cilantro-garlic sauce that comes with them) and two arepas to share, one with avocado and cheese and the other with black beans and cheese. I tried the sugar cane juice, which was very sweet. I probably wouldn’t get it again, but I was glad to have satisfied my curiosity.

We swung by the house so I could cycle laundry and then we went to swim at Long Branch pool. We invited the kids along to this portion of the festivities and while we weren’t surprised Noah said no, we were surprised when North did. They are usually up for a trip to the pool. But since we were alone, I guess it was an extension of the date, though we were separated for most of it, as I was swimming laps.

Later I posted on Facebook that it was our first date since the pandemic started, but then I remembered we went out for pizza one night in late May when Noah was at YaYa’s and North was sleeping over at Zoë’s and that was definitely a date, so I corrected the post to say second.

But it made me wonder exactly what constitutes a date? How about the picnic of takeout Greek food we had on under a park shelter on a rainy day in late March on our way back from being vaccinated in Western Maryland? Or the walk through the snowy woods in Blackwater Falls State Park on Christmas day? My cousin Holly, who’s widowed, said those both count, so I will take her word for it. But I draw the line at counting the trip to Ikea we took a couple weeks ago. However many dates there have been, I’m optimistic they will become more frequent in the months to come. And that’s a happy thought.