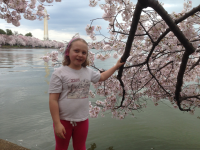 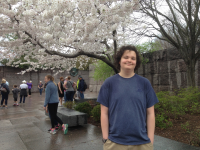 On the first day of spring break June asked me some questions about her donor for a family history school project and I dug out his file, which I hadn’t looked at in years. I noted he’d taken a personality test and was an extrovert. I don’t think I paid much attention to this at the time we selected him, but it certainly explains a lot. For instance, we were looking at the file soon after June got home from back-to-back play dates, one at Megan’s house and then she and Maggie arranged to meet at the playground. Afterward, completely without irony, she said she hoped she had more to do the next day than she’d had to do that day because there had been too much down time. So it was a good thing we took her on a five and a half hour-excursion to the Tidal Basin the second day of spring break.

June wanted to dress like a cherry blossom for the occasion. She found pink sweatpants, socks, and crocs, but she had no pink shirts, so she settled on a white one, reasoning that some of the blossoms are white. She finished the outfit with a pink headband with white dots. Later on Facebook, Beth’s mom opined June made a “lovely blossom.” I have to agree.

Meanwhile, Beth wore a long-sleeved t-shirt with pictures of actual cherry blossoms she bought during some previous Cherry Blossom Festival. This was good, but Noah and I were in various shades of blue, brown, and gray and completely without floral design. Beth said I looked like a dead, dried up cherry blossom in my gray turtleneck, and June thought this was pretty funny. And actually, I had been feeling kind of like a dried up blossom for at least a week, headachy and easily fatigued.

We left a little before ten, took a bus to the Metro and then stopped at the Starbucks in Union Station for treats. Still in the cherry blossom spirit, June got a Cherry Blossom frappuchino. Beth tasted it and thought it was actually strawberry. I thought it might be raspberry, but I looked it up and she was right. It also had a green tea drizzle, either to evoke the stems or to give it an Asian twist. I decided to get into the spirit, too, and I got a cherry-oat bar and a hot green tea. Soon after I drank the tea, the caffeine chased my headache away and it didn’t come back the next morning as I feared it might.

From Union Station we took a circulator bus to the Tidal Basin. It was raining as we got off the bus and we’d elected not to bring umbrellas, which was seeming like a bad idea at the moment, but it wasn’t raining too hard and it stopped after ten or fifteen minutes so we didn’t get drenched.

We picked just the right day to go. We mainly picked it because Beth had the day off for Good Friday and the crowds would be less than over Easter weekend, but it happened to be the peak bloom day. All the trees were covered with puffy pink and white blooms, the slender saplings and the gnarled old ones. We walked all the way around the Tidal Basin, stopping at the MLK, Jefferson, and FDR memorials, reading the quotes carved in stone.

We lingered at the FDR Memorial the longest, because it’s the most interactive, with the most things to look at and read. I like the MLK memorial, but Beth and I were talking afterward about how they could have made it about the whole civil rights movement in the way the FDR memorial is about the Depression and WWII. From June’s point of view, the FDR memorial is the best because it has big blocks of stone to climb. Unfortunately, she slipped on the wet stone and banged the back of her head so hard it made an audible crack. Beth and I were checking her for signs of concussion the rest of the day but she seems to be okay.

On the way home, we had a late lunch at Union Station. The kids got pasta from Sbarro and I had a spinach Stromboli. Beth got avocado toast from Le Pain Quotidien and then June got candy from the Sugar Factory, and the rest of us got cupcakes from Crumbs. I thought the Cherry Blossom one, with pink frosting and cherry jam inside was the only choice, but they did have a wide selection of Easter-themed cupcakes, with jelly beans or Peeps on top. Noah got a chocolate one with yellow squiggle of frosting meant to evoke a chocolate egg.

By the time we got home it was almost three thirty. Noah and I read To Kill a Mockingbird and June did a phone interview Mom for her family history project and then we went out for pizza and gelato. It was a Good Friday indeed.