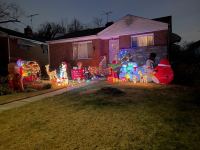 “Merry Christmas!” Noah said shortly after he disembarked from the charter bus in the mall parking lot just north of Baltimore nine days before Christmas. He was holding out a gingerbread biscotti. Turns out he’d texted Beth from a Starbucks in downtown Ithaca shortly before getting on the bus (to let her know he’d made it to the stop in plenty of time) and she remembered my frustrated quest and asked him to look for one. So I have both of them to thank for finding the elusive pastry for me.

Noah said the bus was not too crowded but he did have someone sitting next to him and this was somewhat worrying because the majority of the students on the bus were from Cornell, which had an even worse outbreak of covid cases than most college campuses, including Ithaca, seemed to have had at the end of the fall semester, thanks to the omicron variant. (Ithaca went from green to yellow to orange alert status in about a week’s time, but they didn’t cancel fall graduation. Cornell did.) I was reading on the IC parents’ Facebook page about students who tested positive getting quarantined and not being able to leave campus when they’d planned while all other students were required to skedaddle within twenty-four hours of their last exam.

It was all a little alarming, so Beth scheduled covid tests for all of us on Sunday, which was three days after Noah got home and four days before we were leaving for Blackwater Falls State Park. Even though we are all vaccinated and everyone is boosted (except North who won’t be eligible for the booster until they turn sixteen in March), we did not want to take the chance of exposing Beth’s mom or her aunt. We got the tests at the same health center where Beth and I got our booster shots in October. It was very efficient—we were in and out very quickly—but the protocol was you swab your own nostrils and I was fretting on the way home that I hadn’t done it right and I’d get an inconclusive result. (I don’t even know if that’s possible, but it’s what I was thinking.) Then I told myself that if that did happen and everyone else’s test came back negative there was very little chance I’d be positive, as I’m not the one who spent seven hours on a bus full of college students or who goes to high school in person. I’m not even the grocery shopper, so I’m rarely inside anywhere that’s not my house for more than five or ten minutes. We were told it would be one to three days before we got the results, which would fall sometime between Monday and Wednesday.

While we waited first to take the tests and then for the results, those of us who weren’t on break yet worked and went to school and we all made merry at home. Earlier we’d discussed going to see A Muppet Christmas Carol or maybe another movie at AFI or going to this event at Nationals Park when Noah came home, but without even discussing it, we seemed to agree these kinds of  indoor or crowded events are no longer in the cards, at least not before we visit with senior relatives. (And depending on how events unfold over the next week or two, maybe not after either.)

So we watched Rudolph the Red-Nosed Reindeer, Frosty the Snowman, Frosty Returns, and How the Grinch Stole Christmas, which came bundled with this odd little cartoon, so we watched that, too, though we drew the line at watching this. North made apple blondie-cheesecake bars as a Christmas present for Miles and Maddie (and delivered an extra to Zoë). I made gingerbread dough to take to the cabin and froze it. Beth made a big pot of chili so no one would have to cook on our first night there and she froze that. There was some last-minute present buying and wrapping. Beth, Noah, and I took another evening walk through the neighborhood on Saturday night so we could show him some of our favorite lights. We favor houses with a high density of lights and/or inflatables. Though our yard is only moderately lit (the candy canes are my favorite part), we appreciate the efforts of those who believe that when it comes to Christmas decorations, more is more. Someone has to take it up to eleven and we’re the ones who do it on Halloween.

In non-Christmas related entertainment Noah and started to read The Space Between Worlds and to watch season three of What We Do in the Shadows; Beth, Noah, and I picked up Buffy the Vampire Slayer where we left off; and North, much to my surprise, started reading The Shining.

Our covid test results dribbled in one by one. I got mine Monday afternoon—negative. Beth got hers Tuesday morning—negative. Tuesday morning Noah’s came, negative; and finally, Tuesday evening, we got North’s results, negative. The trip was a go.

Because we usually travel for Christmas, and the car is often packed, we have a tradition of opening gifts from folks who won’t be with us on the big day before we leave. Generally we do it on the solstice and that’s what we did this year, after dinner on Tuesday. From my mom and sister, Beth got waterproof bags for kayaking, I got three books, Noah got a big chef’s knife and spice jars with magnetized lids that stick to a refrigerator door for his apartment kitchen, and North got two Etsy gift certificates. (A few days earlier Beth and I had opened a box marked perishable with Harry and David pears and an assortment of cheeses from creamery near my sister’s town.) That was the night we watched the Grinch in the living room lit by Christmas lights and candlelight and ate gingerbread (the cake kind, not the cookie kind) which I’d asked Beth to buy at the Co-op. It was a very cozy evening.

Wednesday was the last day of work and school. That afternoon I finished up a blog post about coenzyme Q10 and read a couple chapters of The Space Between Worlds with Noah while Beth took North to a follow-up appointment at the orthodontist and then out shopping for winter boots. Beth’s dreaming of a white Christmas. The forecast doesn’t look promising, but you never know, and there could be artificial snow on the sled run. When Beth and North got home, Beth and Noah strapped the tree to the car because we hit the road tomorrow morning. I wish you a merry Christmas and I hope it’s lit—moderately or extravagantly-—however you like it.