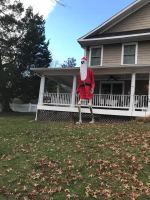 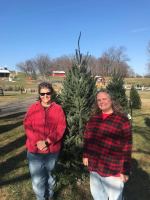 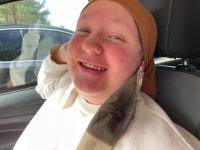 From “Something About December,” by Christina Perri

On the first of December, I put on my Christmas tree socks, took a walk past the neighbors’ house with the giant skeleton (now decked out in a Santa suit), made myself some peppermint tea, and settled in on the porch with Marley, which is a Christmas Carol prequel, partly from Marley’s point of view. I got it for Christmas last year and when I didn’t manage to read it during the holidays, I decided to save it for this December. It’s not a Christmas book really. It takes place over the course of many years, at all different times of year, but the characters—Scrooge, Marley, Fan, Belle, Fred, Bob Cratchit—are all so fixed to Christmas in my mind, it still seems like a Christmassy read. It took me ten days to read and I enjoyed it. Fair warning, though—it’s really sad. I guess it would have to be to explain how Ebenezer got as warped as he is at the beginning of A Christmas Carol.

Continuing in the Christmas spirit, Beth and I went to get our tree from Butler’s Orchard a few days later, on the first Saturday in December. As usual, we’re taking it to Blackwater Falls State Park, where we will spend Christmas. We usually get our tree just a few days before Christmas, but Beth heard there might be shortages, so we’ll be storing it in the tub of water in our garage where it’s been for the past ten days for another nine. I asked Beth if she thought our next door neighbors, who share a driveway with us (but not a garage—they have their own) will find this strange. She said if so, it would be just one more strange thing in a long list they’ve probably noticed about us. I try to remember to visit it every day, to check the water level and just to breathe in its smell.

After picking the tree, we shopped a little at the farm market, where we got some gifts and a pecan bar to share, and then we went for a walk in Black Hills Regional Park.  Beth spotted a possum, which stood perfectly still for an impressively long time when we stopped near it, though it did not appear to be faking its own death. It didn’t fall over anyway.

It was nice to be tramping through the woods with occasional views of Little Seneca Lake on a sunny, mild morning until Beth tripped over a rock or a root on the trail and fell. She hurt her knee, but she wanted to keep going, so we did, and we walked a little over an hour.

After we got home and ate a late lunch, it was time for Noah’s band concert, which was being live streamed. Beth connected a laptop to the television so we could watch it on the biggest screen in the house. Usually at band concerts, we have to strain to see our percussionist at the very back of the stage, if we can see him at all. But the camera roved all over the band and we got frequent, clear views of him playing xylophone, timpani, snare drums, bells, marimba, cymbals, triangle, bongos, and tambourine. The music was not as challenging as the music his high school band used to play, but that band was quite competitive (with a director focused on winning top marks at state festival). Noah’s college band is more laid back, consisting mainly of non-music majors with a sprinkling of music majors playing an instrument other than the one that’s their major. The concert was a lot of fun to watch, and shorter than I expected, running just under an hour.

It had been a big couple days for Noah. The day before the concert, he’d taken a test to become an FAA-certified drone pilot. It was a written test, but he had to go to the Ithaca airport to take it. This will be a handy job credential for him. Speaking of jobs, he got a job with campus IT next semester installing hardware and software.

Even Though It’s Christmastime, We Still Have Medical Appointments…

Last Tuesday North got their braces off. It was supposed to happen the day before but there was a power outage at the orthodontist’s office, so they had to wait an extra day. They were presented with a little box of now authorized treats like gum, Starbursts, gummies, and popcorn. North commented to us that these were all things they ate with braces (especially popcorn which they make several times a week) but they had the good sense not to mention that to the orthodontist. The funny thing was even though I knew full well that they’d already eaten some of the taffy I got at the beach with their braces on, I saved five pieces to give them on the big day. It just seemed like the thing to do. They had a day to enjoy their newly smooth teeth with no orthodontic equipment until they got their retainer Wednesday.

I went to the eye doctor on Thursday. It was a routine annual exam but I have had so many medical appointments over the past several months—with my primary care provider, the allergist, the ophthalmologist, the dermatologist, and finally the optometrist—that it was a relief to get the last one of the year checked off my list.

I do have to go back to the allergist in January. After two months of taking a daily antihistamine, per his advice, I went off the medication on the scheduled day, the Monday after Thanksgiving, and by the end of the day I was sporting a hive on the inside of my left wrist. I didn’t even bother to wait for it to get bad and started to take the antihistamine again. Now since I’d been off soy for this same two months, it seems that wasn’t the problem. As much as I’d like to know what the problem is, I’m really happy to know it isn’t that, because soy is an inconvenient allergy for a diabetic vegetarian.

Meanwhile, North has finished a round of physical therapy to strengthen and stabilize their right knee, so they will have fewer appointments to go to as well, at least in-person ones. They started seeing a pain psychologist online, but so far they aren’t finding it very useful.

This past weekend Beth and I threw ourselves into Christmas preparation, with a little recreation as well. Friday evening we went out for pizza (indulging in a rare indoor restaurant dining experience), visited an outdoor holiday market in the parking lot of the Co-op, and watched the first half of a ridiculously cheesy lesbian holiday movie. (We finished it the next night.) It’s called Christmas at the Ranch and it’s so bad it’s good, if that kind of alchemy works for you. As North and I observed when we’d only watched half, the only suspense was whether the ranch hand and the elderly ranch owner’s granddaughter would get together before or after they saved the failing family business. You won’t be finding out which it is from me. You’ll have to watch it if you want to know.

Later in the weekend our Christmas cards finally arrived. We’d ordered them the last week of November and I was so worried about mail slowdowns that we addressed almost all of them all in one afternoon, which we’ve never done before. Beth also did a lot of straightening and decorating, and we both wrapped presents. I’m not quite finished with my shopping, but I’ve got my wrapping caught up to my shopping and everything that needs to be mailed has arrived. After our industrious weekend, I reflected that we’re a good team because I’m better at remembering things like who has moved in the past year and will need a new address on the card and she’s better at remembering things like where we put the new ornaments we just bought.

We haven’t baked anything, but there’s going to be less baking than usual this year, for the obvious reason, so I think starting next weekend should be fine. I plan to make gingerbread dough at home and bake it in the cabin. North’s making chocolate-peppermint cookies but I’m not sure if they’ll do it at home or at Blackwater.

As you can see, I am not completely forgoing Christmas treats. I portioned out the candy I brought home from the beach very slowly and it took two weeks to finish. Then on Saturday afternoon North and I walked to Starbucks. I was after a gingerbread biscotti and the app let me order one but when I got there they didn’t have any and they tried to give me a vanilla-almond one. (This is the second time this happened to me in a week—the first time I didn’t even realize I had the wrong biscotti until days after I bought it, when I got it out to eat. Apparently, there’s a gingerbread biscotti shortage. Consider yourself forewarned.) I took a refund instead as the vanilla one fell into the category of Not Worth The Carbs.

It was a nice outing anyway. We both got our coffee iced. For North this is par for the course year round, but for me it’s pretty unusual in December. It was unseasonably, freakishly, warm, in the seventies. North and I both wore skirts, with no leggings or tights underneath and we drank our coffee at an outside table. On our way home, we took a brief detour so I could show North the skeleton in a Santa suit. I am that taken with it. Beth and I took another walk after dinner Sunday to look at some of our neighbors’ lights.

We’re back into another week of work and school, the last full one before Christmas. Noah’s last project is due tomorrow and he’ll take a bus home on Thursday. Having him home will make it seem like the festivities are in full swing.