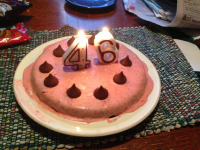 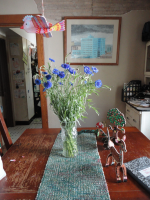 The Trouble with Forty-Six

Forty-six is not exactly a milestone birthday, but in the weeks leading up to my birthday it occurred to me more than once that while my new age can still reasonably described as “mid-forties,” it indicates the scale is tipping. It’s closer to fifty than to forty.  When I mentioned this to Beth, she said, “That’s the trouble with forty-six.” (She turned forty-six in November.)  Certain meditations on age from sources as diverse at James Joyce and Bruce Springsteen kept jumping out at me:

I am exhausted, abandoned, no more young. I stand, so to speak, with an unposted letter bearing the extra regulation fee before the too late box of the general post-office of human life.

So you’re scared and you’re thinking that maybe we ain’t that young anymore.

I feel that way some of the time, not all of the time. And of course, one of the nice things about having kids is that your age gets tied to theirs. If you’re curious to see what comes next in their lives, as I am, you have to accept getting older yourself as part of the bargain.  Not that the childless get to opt out of aging, it just happens to take some of the sting out of it for me.

I did have a nice birthday weekend.  The festivities started the day before, when June came into my bedroom at 6:30 a.m. bearing the toaster oven tray laden with a carrot, an apple, a cheese stick, a pita, butter, jam, peanut butter and a glass of water. “Happy day before your birthday!” she said.  Noah had a band field trip to Hershey Park that day and Beth had to get him out the door by 6:15. Left to her own devices for the fifteen minutes between when Beth and Noah left and when she was allowed to wake me, she hatched this plan and executed it by herself.  It was a very sweet surprise, even though I’d been in the mood for scrambled eggs (which I made for both of us once I got out of bed).

That evening, with Noah still gone, we had a girls’ night. We made pizza from a kit and topped it with Kalamata olives and broccoli (June’s choices) and watched Cinderella (also her choice.) She seemed to enjoy being the center of maternal attention for a couple hours.

My birthday was the next day. I opened presents in the morning after breakfast.  This year I had the idea of asking for books by author friends of mine and I got two mysteries (http://www.amazon.com/Shallow-Roots-Anomie-K-Hatcher/dp/1450790569; http://www.barnesandnoble.com/w/dangerous-and-unseemly-kb-owen/1114666776) and a volume of poetry. I did this partly because the books sounded good, and partly of a desire to support my friends’ work, but also for indirect inspiration. I’m not planning to write a book of my own, but I do sometimes feel I need to be doing something besides raising kids and holding down a part-time writing job, something creative.  I just don’t know what it is.

After hearing me complain repeatedly about how it’s been something like a year and a half since Stephen King’s last book was published Beth also pre-ordered his newest book, which won’t be out until next month. I didn’t even know it existed so it was a big surprise. She also signed us up for a composting service, because after years of dabbling with it, we’ve never quite gotten the hang of maintaining a compost pile.  We will put our organic waste out for pickup and get composted dirt in return. It sounds like a good deal to me. Noah got me some fancy cheese and marmalades (pink grapefruit and lemon) and June got me some sea salt caramels. It was quite a haul and only the first day of presents because Mother’s Day was the very next day.

The rest of the day wasn’t exactly relaxing because we’d been away the weekend previous and so there was a lot to do in the house and garden, but I decided I’d spend the day on outdoor chores, as it was a lovely spring day. I prepared the pumpkin patch and transplanted the largest pumpkin seedling, which was getting too big for its pot, into the ground. I mowed the lawn and swept and hosed the dirt and pollen off the front porch. All the while I was listening to Ulysses on my iPod because I need to finish it by Wednesday for book club.  (I am reading and listening to it. I finished the audio version on Sunday but I still have most of the Molly’s final forty-five page unpunctuated soliloquy to go in the print version.)

It was nice to be outside and moving most of the day and I felt cheerful and productive. We had dinner at Austin Grill and then came home for homemade chocolate cake topped with fresh strawberry frosting (my favorite frosting) and Hershey’s kisses Noah had brought home from Hershey Park. It was a sweet end to the day.

My birthday is always around Mother’s Day so I often feel sorry for Beth, for having to coordinate two gifts from each kid for me, but she came though, as always.  June wanted to buy flowers for me so we held off exchanging gifts until after Beth and June went grocery shopping.  At the farmers’ market, June selected a big bouquet of bachelor buttons and she also came home with a card that said, “the journey of a lifetime is in a single step from “no” to “yes.” She picked it because it had a seashell on the front. The funny thing about this was that Beth had originally nixed the idea of buying a card because June made cards for us at school, one in English for Beth and one in Spanish for me. But June has a way of turning no into yes, and Beth thought it was so fitting she bought the card.  Noah got a selection of teas for me, and for Beth the kids got a mortar and pestle (June) and green and black rice (Noah).

We opened our gifts at the glass table in the back yard where we’d laid out a picnic lunch (June’s idea, of course).  Beth made lemonade and we had the cheese from my birthday and Noah’s, crackers, watermelon, and the first local strawberries of the year.  June also requested and received a grilled cheese sandwich and goldfish crackers.  We finished the meal with leftover birthday cake.  It was pleasant lingering at the table after the meal. I leaned back in my chair and looked up at the green leaves on the branches of our biggest maple and at the blue sky.  But eventually we got up and I did the dishes, Noah went back to his homework and Beth went back to a project for work.

Later that afternoon, I went to swim laps. Beth asked if I was sure the pool was open and I said I thought so because it was “just Mother’s Day,” meaning not the kind of holiday that causes the pool to close.

Even though it was full of chores, weekend felt celebratory enough. When I came home from the pool, Noah had more or less finished his homework and Beth was making tempeh reubens and June was in her doctor’s coat with the toy syringe preparing to perform surgery on Beth, whom I learned had dangerous germs in her bones. In other words, it was normal Sunday afternoon, but normal in a good way, in the way that turns the no of self-doubt into yes.

Right after the line I quoted from Springsteen’s “Thunder Road,” the speaker urges, “Show a little faith, there’s magic in the night/You ain’t a beauty but hey, you’re all right.” (Beth has always maintained this is one of the best romantic lines in a rock and roll song.)

And you know how Ulysses ends, right?

Yes I said yes I will Yes.