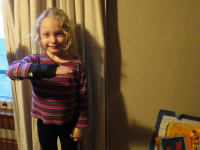 Two weeks ago June and I were walking home from her running club practice when she tripped and fell to the ground, breaking her fall awkwardly with her right hand. I was puzzled at first because when I asked what hurt she said it was her hand, but a glance at her palm revealed only the slightest scrape and she was crying really hard. She continued to cry the rest of the way home and for a long while afterward.

I chalked it up to the fact that she’d been emotionally fragile and prone to tears for at least a week. She often gets teased at school for being the smallest in her class and it had flared up recently. Initially I thought the crying jags were because she wasn’t sleeping well and then I thought it was because she missed Beth while she was out of town but the first night Beth was back, she finally told us what was wrong.

She and Noah had been squabbling over something—I don’t remember what—and she burst into tears, saying he’d said she was always wrong and he was always right.  I’d heard the whole exchange and I knew he hadn’t said any such thing, but I supposed it was how he’d made her feel.  “Is it hard being the youngest sometimes?” I asked her, pulling her into my lap.

This was close enough to the underlying problem that she started to cry even harder.  “Sometimes it’s hard being the littlest one in my class,” she said, and she told us people have been picking her up off her feet without her consent again (this is a recurring issue) and someone said she looked like a baby and must not be very smart.

Beth had come into the room by this point and June took a turn on her lap as she unburdened herself. It turns out that one of the ringleaders was a boy just barely taller than June so I told her he was probably trying to make himself feel bigger by picking on her.  Because the problem was mainly with kids in her morning class during the students’ less supervised times (in the lunch line, at recess), I said I could talk with Señorita M., the morning teacher.

So, as I said, when June fell and her response seemed disproportionate, I wasn’t that surprised. This kind of thing had been going on for a week. But the crying went on and on, so I called Beth at work and told her it was possible June had sprained her wrist, and Beth said she’d come home early and take June to an urgent care.

By the time she got home, though, June wasn’t crying any more and there was none of the swelling or bruising you might expect from a bad sprain (I’ve had a few myself) so we were wondering if it was really necessary to keep June up past her bed time to drive her a half hour away to go through the hassle and expense of a medical appointment, but June insisted it still really hurt so they went.

They returned close to Noah’s bedtime. June had her right hand in a splint and a set of X-rays to keep and the whole experience seemed to have been quite satisfactory from her point of view.  I will note here that June is fond of medical attention and is quite well acquainted with the school nurse.  They used to call me whenever she made a visit to the Health Center at her school. Now they never do.

Beth and I both thought she’d wear the splint to school the next day (a Friday), bask in the attention and it would be off by her Saturday morning gymnastics class.  We were wrong. June went to gymnastics, but she only participated in the stretches and the trampoline.  At school her gym teacher made her sit out, even though they were playing soccer. What better game for a kid with a hurt wrist—you aren’t even allowed to use your hands!

Every time she took a bath we’d remove the splint and Beth would palpitate her wrist gently and June would say it still hurt. It was always in exactly the same place, too, which made us believe it wasn’t just wishful thinking on her part.  A week went by and then almost two. During this time we needed to replace the wrapping, which had gotten grungy and kept coming undone because the Velcro was wearing out, so we bought a self-adhesive kind at a drugstore while we were at the beach. Her teachers and classmates took turns writing down her schoolwork for her and she dictated her homework to me.  She also started writing and drawing a little with her left hand, and got better at it with practice.

She was clearly enjoying aspects of this experience, especially the extra attention from Ms. R, her afternoon teacher, whom she adores. And sometimes she was loath to talk about anything but her wrist. One day a few days after the accident, she was listening to Beth and me having a boring, grown-up conversation about an email problem I was having (long delays in receiving messages, one sent on Thursday didn’t arrive until Saturday, etc).  June suddenly saw a way to turn the conversation in a more interesting direction and piped up, “Thursday? That was the day I sprained my wrist!”

The week after she sprained her wrist, I picked her up from her after-school art class and we visited Señorita M to talk about the problems she was having with her classmates.  Señorita M, who is a small person herself, listened sympathetically, thanked her for coming forward, and promised to have a class meeting about it, with no names mentioned.  June reports that things have gotten a lot better in her class since then, though some kids in her afternoon class are still teasing her. So we still need to talk to Ms. R, but as the main problem was in the morning class, June seems a lot happier.

By Wednesday almost two weeks had gone by and June’s wrist was no better. So we took her to an orthopedic specialist. When we took the splint off, I looked at her wrist, which looked bare and delicate.  I noticed the now exposed fingernails on her right hand were longer and cleaner than the ones on her left hand.

The technicians took new X-rays from multiple angles and then the doctor examined her wrist, agreed with us that it was odd it had not healed, but had no good explanation. He showed us the X-ray and said the bone that would be most likely to have suffered a break was often not even fully ossified in children her age and in her case was more cartilage than bone. He said there was no next step, other than an MRI, which he did not think was warranted at this point (thank goodness). He fitted her with a brace he thought might be more comfortable and convenient than the splint (no wrapping and unwrapping), told us to come back if it wasn’t better in another two weeks, and sent us on our way.

So we have no answers, but June likes the new brace and says it’s more comfortable than the splint.  Her fingers stick out more so she can use scissors and hold utensils, though she still can’t write. The brand name of the child-sized brace is Tiny Titan.  Beth and I couldn’t stop smiling about that. It seemed perfect for June, whom we have always called “small but mighty.”  She’s the only athlete in the family, as well as the only extrovert, and she has a good understanding of her needs and knows how to express them. While no parent likes to see his or her child suffer (the night she told us about the teasing I cried, too), I know she will persevere through whatever physical or emotional challenges life throws at her because she’s our tiny Titan.