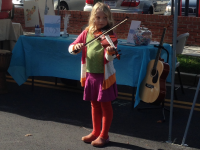 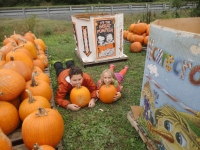 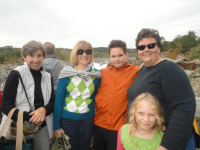 A friend of mine posted on Facebook recently that she was down and wanted to some suggestions for what people do to feel better.  A lot of people, including me, suggested getting outside. I thought of this on Sunday, when I spent most of the afternoon outside. I needed it, as I’ve also been down for a while. Part of it was having a mild cold and part of it was missing Noah while he was away in New York for a week on a school trip, although even together neither of those factors really accounted for the depth my funk. I did notice after the fact that while he was away that I used a lot “dis” words in my Facebook status updates—“discombobulated,” “disquieting,” “disrupted.”

But then he came home and we were all very happy to see him. We went out for celebratory pizza at gelato at Mama Lucia’s Friday night, and he and June spent part of Saturday afternoon and evening working on a movie they’ve been making together and digging into the big box of Pop Rocks he bought at FAO Schwartz. The Supreme Court decision that allowed friends of mine to get married in Virginia and Colorado this week was also cheering.

Sunday we had a day of family togetherness planned. June’s music school had a booth at a little street fair in the morning and they asked her to come play her violin in front of the booth. She did this once at the farmers’ market last spring (4/12/14) and was happy to do it again.  Noah stayed home to finish up some work before our afternoon outings, but Beth and I were there to see her play “Twinkle, Twinkle, Little Star,” “Ode to Joy,” and two of her own compositions to a small audience and applause.  Afterward we stopped at a crepe truck and had a snack because we were going to have a late lunch.

Next we drove out to Northern Virginia, where we got cider, spaghetti squash, pumpkins and decorative gourds at Potomac Vegetable Farms. The kids and I picked two gourds each. Mine—a little orange and green speckled pumpkin and a white one—are on my desk. The rest are on the porch and the dining room table. Beth said she had “zero decorative gourd needs,” so no gourds for her.

The Chesapeake & Ohio Canal National Historic Park on the Maryland side of Great Falls was our next stop. Last week Beth’s cousin Sean biked from Wheeling to Washington, D.C. and his mother, Beth’s aunt Carole was driving out with Beth’s mom to pick him up and bring him back to Wheeling, so we all agreed to meet up at the park for a picnic. We arrived around the same time as YaYa and Carole, a little before two. Sean was not expected until four, so we had our picnic without him near the canal. As always when members of Beth’s family are together, a lot of food was exchanged. We went home with our leftovers plus a bag of pistachios, some pretzels and three kinds of cookies. YaYa and Carole took with them their leftovers, a jug of cider, and a box of flax seed crackers.

After we ate we took a walk along the towpath and on footbridges and boardwalks over the Potomac River and on an island in the middle of the river. It was good, restorative even, to be walking around outside with family in a beautiful place. The kids had fun, too.  They both enjoyed throwing pebbles and acorns into the canal and Noah liked inspecting the locks and June found a sycamore tree that was hollow for at least ten feet up. It reminded me of the hollow tree in one of the Pippi Longstocking books.  Unfortunately, Sean got lost on the way to the park and around five we had to leave without having gotten to see him, but it was still a very nice afternoon, and not something we do every Sunday.

The next day was Columbus Day. I used to love Columbus Day. I always said it was my favorite minor holiday, its celebration of imperialism and genocide notwithstanding. Why? Beth has it off work and the kids don’t have it off school so it gave us a built-in date day every second Monday in October. When June was in preschool, we’d visit Noah’s elementary school because the schools all have Open Houses on this day, which is convenient for so many DC-area parents who work either for the federal government or for non-profits that follow the government’s holiday schedule. But even with June in school only a few hours, we always seemed to have enough time to have lunch out while she was at school and watch a Netflix movie while she napped.

But once June started elementary school, we had two schools to visit and we’d generally go to one in the morning and the other one in the afternoon. It was still pleasant and we still found time to eat lunch out, but it wasn’t quite the luxurious day it had once been.

So all this is to say that it wasn’t as disappointing as it would have been a few years ago when June announced Monday morning that she was sick to her stomach and didn’t want to go to school. I have to admit I did think sadly of the lost opportunity to have lunch alone with Beth before I tried to sort out who would go to which school when.

As a first step, we decided I would go to June’s morning class and Beth would stay home with June. June has math and science in the morning in Spanish and I speak Spanish and Beth doesn’t so that decision was easy enough.

I wanted to see this class, as opposed to June’s afternoon class, for two reasons. One was that since Noah’s been in middle school we always go to visit his Media Production class since it’s consistently his favorite and he has it during sixth period this year. But the more important reason is that June feels intimidated by Señorita Y.  Señorita Y has a reputation for being strict, but June usually does fine with strict teachers (and lenient teachers, and all teachers basically). It’s to the point where she won’t turn in forms and she failed to turn in her summer math packet because she was afraid to approach her, and as a result she isn’t eligible to go a party this week for all the kids who finished it and I had to wade through a lot of red tape to order to school pictures on the phone after they’d been taken. I wrote Señorita Y a note and asked her to tell June she can talk to her whenever she needs to, which she did.  I’m not sure if this talk will help matters or not, but I wanted to see what her class is like, even without June in it.

The lesson was on multiplication. They were discussing the commutative property when I arrived. Later they used a matrix to figure out 9 x 9 and various kinds of diagrams on the white board and in their notebooks to figure out other problems. They also had plastic tiles to arrange in row and columns. The lesson seemed well thought out and the kids were engaged, but I did see Señorita Y get cross on a few occasions, when a child was too slow to answer or asked a question that had already been asked and answered. She’s not a particularly patient or friendly teacher, but June’s doing well in her class, according to the mid-quarter progress report we received and some teachers (and bosses) are just like that. Learning how to deal with gruff authority might be what June needs to learn from her as much as multiplication strategies. I’m taking a wait-and-see approach before doing anything else about it.

When I came home, June was feeling better and she was ready for lunch. After she ate two bowls of lentil soup, an apple, and a pear, and asked for a cookie, I informed her that if she was well enough for a cookie, she was well enough to go to school for her afternoon class. She went back to her room to listen to a book on tape and to think about this and after the first cassette of Ramona the Pest was over, she decided she would eat the cookie and go to school. I gave it to her, feeling a bit like I was bribing her because it allowed me to go with Beth to Noah’s school, which was what I wanted to do.

We took June to her school and drove to Noah’s. We were going to his sixth and seventh period classes and then taking him home.  Driving him, we’d get home a half hour before the school bus and he needed an early start on his homework because he was going to a high school Open House for a math and science magnet that night.  I didn’t know whether I was going or not because I didn’t have a babysitter yet and while we leave June alone in the daytime for short periods and both kids alone at night, we don’t yet leave June alone at night.

In Media, the kids discussed how the interviews with their documentary subjects in New York had gone, as it was their first day back in class after the trip. After that, the teacher gave instructions for transcribing the interviews and set them to work writing thank you notes to their chaperones and interview subjects.  This was not too exciting to watch and the next period was not much more dynamic.

In science, they are designing green houses, each in a different ecosystem.  (Noah’s house is in Antarctica. I imagine heating it will be his biggest challenge.) The project itself sounds interesting but what they actually did in class was go to the computer lab and do research, so there wasn’t much instruction to watch in this class either.

That night Beth and Noah went to the Open House and I stayed home with June, as I had failed to find a last-minute sitter. This is the second time this has happened this month. I really need to find a back up sitter.  Anyway, Beth said the session was interesting and informative. Noah didn’t have much to say but I’m hoping after he goes to the humanities magnet session tomorrow he will be able to make some comparisons.  We had been leaning against having him apply to any high school magnets because seventh grade was so brutal, but eighth really has been better, at least so far, so we are considering the idea again.

It wasn’t an ideal Columbus Day. I would have liked some alone time with Beth, especially as she’s leaving on a five-day trip Friday morning, and I was sorry to miss the magnet Open House. I’ve missed two of these now and I am feeling out of the loop. But I think I have a better sense of June’s morning class and it’s always nice to see Noah in his school environment, even if the lesson plans were not particularly scintillating. That’s not something I get every Monday either.