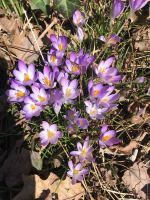 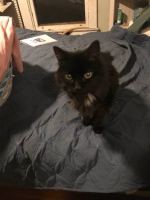 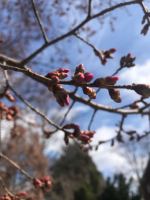 Spring is on the horizon. There are crocuses and snowdrops in abundance down by the creek and elsewhere and I’ve seen aconite, winter jasmine, and one clump of daffodils in neighbors’ yards. Our own daffodils poked their heads out of the ground a few weeks ago, but have yet to open. The cherry tree at the end of the block that always wants to get the party started well before the other two dozen or so nearby trees are even thinking about it has swelling buds.

I moved the rosemary and parsley plants that have been living in a sunny spot in Noah’s room/Beth’s office back outside this weekend because I think they need the sun more than protection from the cold at this point. It still goes below freezing most nights, but not by much and they’re hardy enough for that. I’ll move them back inside if we have a cold snap.

The spring musical opens in a few weeks and North is costumes manager again, so they have rehearsal most days after school. It’s also the time of year when we start making plans for spring break and summer.

The school district announced its snow day makeup plan and they scrounged up the necessary days by turning a teacher planning day in April into a half day and by adding two days to the end of the year. This is the very outcome I was hoping for because it leaves spring break intact. Now we just need to keep our fingers crossed it doesn’t snow again, but even if it does MCPS’s message implied any further snow days will be either remote instruction days or the district will apply to the state for a waiver.

It gave us enough certainty to plan our April trip to Michigan to meet one of North’s half-siblings from their donor’s side. The kids have been in touch since we got North a membership to the Donor Sibling Registry for their birthday last spring. Avery is a senior in high school, has two moms, and like North, identifies as non-binary. On the way to Ypsilanti we’re going to stop in Wheeling to see Beth’s mom, and then in Oberlin for North’s first college tour. It should be a fun trip.

And then this summer we’re going to the beach twice. Noah doesn’t know how long he’ll be home because he’s planning to spend the fall semester abroad and some of the programs he’s considering are summer-and-fall programs (or actually winter and spring since it’s Australia). This means he could be leaving any time between mid-July and late August.  We need to go to the beach early in the summer if we want him to come. But my sister’s family is moving from Ashland, Oregon to Davis, California in June or July and they can’t come until the move is complete, so we need to go late in the summer if we want them (and my mother, who is still recovering from her broken neck and will travel with them) to come. I still have some of the long-belated inheritance money I got from my father last summer, after putting most of it away for retirement and giving some away, so my elegant solution was two beach trips, one with me, Beth, and the kids the week of July 4th, and one with extended family in early August. We booked houses in Oberlin, Ypsilanti, and Rehoboth just this week. Having this settled is a relief because it was all up in the air for a while and I was anxious about it.

The one thing I wish I knew about the near future that I don’t know 100% for sure is whether Noah is coming home for all, part, or none of his spring break, which is in just two weeks. He’s directing a film for his advanced cinema production class and he was hoping if he could get a crew and actors to agree to stay on campus, filming during break would give them a solid block of time when no one has class. This made perfect sense and part of me hoped it would work out for him, but there’s no denying I would have been sad not to see him until May if that’s how it shook out, and the uncertainty was driving me more than a little crazy. Just this morning when Beth texted him about buying a bus ticket to come home, he said he probably would.

In other news, I recently finished a program for newly diagnosed diabetics, consisting of two calls with a nurse and six Zoom sessions with a coach spread out over four months. Afterward I went in for bloodwork, and my A1C, a measure of average blood sugar from the past three months, is at the bottom of the prediabetic range, just a tad over normal. That’s with medication, of course. It doesn’t mean I don’t have diabetes any more but that between diet and the meds, my blood sugar has improved well beyond my primary care provider’s goal for me, not quite six months after diagnosis.

I’m still not happy with the reliability of the sensors I wear on my arm, which I sometimes test against a glucometer with finger pricks, and I go back and forth about whether I should give up on them and just use the blood method. The sensors, when they’re working, have two advantages, though. You don’t have to stab yourself with a sharp object several times a day and the app creates a graph that shows you when your blood sugar peaked and approximately how high. When you use finger pricks you have more accurate data points, but without much idea how they connect. I am trying to be at peace with the sensors’ erratic performance and not give up on them and take them off so soon. When it all starts to stress me out, sometimes I take a day off checking either way, and just try to eat intuitively.

Another piece of good news is that the hives I’ve had since last summer seems to be tapering off. On the allergist’s suggestion I started taking the antihistamines every other day (instead of every day) in mid-January and I noticed I wasn’t getting hives too often, so I stopped entirely the first week of February. Now I just take one when I have a breakout, which has only happened four times this month. The last time was in mid-February and three of the four times, the hives were very faint and not too itchy. Fingers crossed, maybe it’s over. We never did figure out what was triggering them.

Speaking of skin, Xander’s skin infection is back. It’s confined to a small patch on his stomach and because we caught it early, the medicated wipes seem to be stopping it from spreading, though it’s been a few weeks and it’s not getting better either. It doesn’t seem to be bothering him much, but he’s a good-natured cat, arthritis, deafness, irritated skin and all, so it can be hard to tell. He turned nineteen the week of Valentine’s Day, and after his health scares last summer, we’re all happy for all the time we have to cuddle on the couch and bed with him (and to give him a small fraction of the cat treats he requests).

One last medical update—as I mentioned above, my mom is still recovering from breaking her neck in October. She got her brace off in mid-January and is in physical therapy. She has some lingering pain, especially late in the day, and she has a limited range of motion in her neck, which impedes her ability to drive. That’s why she needs to travel with Sara and Dave.

It feels odd to have a roundup of medical issues and not mention North, but they’re pretty stable right now. They still have pain, but they’re able to get around where they need to with their cane most days. The pain psychologist they were seeing ended up not being a good fit, so after a few sessions, we decided not to continue. They’re happy about this, because they’d rather just get on with their life, without talking so much about this aspect of it.

And there’s a lot for them to get on with, the play, their birthday next month, a road trip to meet a new relative, and two beach weeks with kin they’ve known all or much of their life.