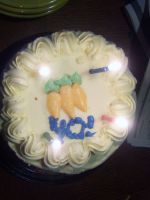 “I don’t think we’ve consulted you on your cake,” Beth called from another room a few days ago. June was fussing and I only caught about every other syllable. I had to think a while to re-construct what she might have said.

“You said consult and not insult, right?” I said.

“So it’s not going to say ‘Over the Hill’ on it or anything?”

“No.” She was still laughing.

I turned forty today. Somehow those birthdays that end in zero lead to introspection and a little prickliness. Well, maybe not all of them. I don’t remember much soul-searching at my tenth birthday, though I do remember a pretty cool cake decorated like a pirate chest. (My mom made great birthday cakes.) And my twentieth birthday was mainly memorable for a surprise party my friend and sophomore-year roommate Jim threw for me. He kept it surprising by throwing it four months before my actual birthday. I’d been complaining about how my mid-May birthday was always during reading period or finals and how I wished it was during the January term at Oberlin when everyone was taking just one class and actually had the time to go to a party. So four months to the day before my birthday, I had my party. There were balloons; there were presents; there was cake. He even contacted my mom and got her to send me a card. It was one the nicest things anyone has ever done for me.

I don’t remember what Beth and I did for my thirtieth birthday, probably something that seemed unremarkable at the time (like dinner and a movie by ourselves) that would be an almost unthinkable luxury these days. What I do remember is how miserable I was to be turning thirty. I was mired in the dissertation-writing process, a year into it and all I’d done was write and rewrite the prospectus four times. My committee finally and grudgingly allowed me to start on the introduction after the fourth draft, but my confidence was pretty low by that point. Meanwhile, I’d decided I definitely wanted children a few years earlier but Beth was unsure and between her ambivalence and my academic paralysis, it seemed like it was never going to happen. I started haunting websites for moms and lurking on pregnancy message boards. To make matters worse, it was clear by that point that Beth and I were going to fall short of our goal of visiting all fifty states by our tenth anniversary that July. I felt like my life was going nowhere.

Fast forward ten years. I accomplished most of the unfinished business of my twenties in my thirties. I received my Ph.d at thirty-two, had my first child at almost thirty-four, visited the last state (Alaska) with Beth and Noah at thirty-eight, and had my last child at almost thirty-nine. So what’s left? It’s looking almost certain that the academic career for which I suffered through the Ph.d is just not going to happen. I spent the first two years of the last decade as a graduate student, the next two as an underpaid adjunct, the next four as a decently compensated but never secure “full-time temporary” assistant professor and the last two years unemployed (aside from the business of raising my kids). I’ve been on the market for a steady teaching job about half of that time. I don’t know if it’s turning forty or the dwindling response to the applications I send out, but I’m starting to feel for the first time that it’s time to call it quits, not in a year or six months if things don’t look up, but now. In a way it’s a relief, like getting off a merry-go-round that’s been making you sick for some time, but still, I step off with a heavy heart. The horses were so pretty and it always seemed like they really were going to go somewhere someday.

This leaves me somewhat adrift. I loved teaching freshman writing seminars at GW and it will be hard to think of something I would find as fulfilling. But some time before June gets on that big yellow bus I will need to come up with a Plan B. For now the work of being the primary caregiver to an aspiring toddler and an active kindergartener is overwhelming enough to keep me from thinking too deeply about it. Every now and then I pick up an academic odd job (tutoring a grad student writing a seminar paper, editing a chapter of a dissertation, scoring the written portion of the SAT) but mostly I am mommy. And while there’s real psychic danger to living too much through your kids, I think more about their accomplishments these days than my own. Noah is reading in two languages now, having learned to read in Spanish at school and how to read in English largely on his own (assisted a bit by the twenty or so episodes of The Electric Company we watched this winter and spring). June has learned two baby signs (cheese and shoes), is up to about ten spoken words, and as of a few days ago, she’s walking! She took her first step a little over a week ago. Over the next few days she would take more and more at a time. Then on Wednesday afternoon, while we were waiting for Noah at drama, she started to experiment, taking a step forward, then one to the side, one backwards, etc. It was almost like watching a dance (a careful, wobbly sort of dance). Then she sat down, stood immediately back up and took nine steps straight to me, ending by hurling herself into my arms. I laughed out loud and hugged her tightly, whispering, “I am so proud of you, Juney.” It was a moment of unalloyed joy for both of us.

Beth is six months older than me so she has scouted out the territory of our forties a bit for me. Right before her birthday, our gynecologist told her that when you turn forty you start to fall apart. Sure enough the day after she turned forty she had a gallbladder attack. She had it out in January and since then she’s had a lot of complicated dental work done. Right on schedule, I am having my first crown later this month. Other than that, though, I haven’t noticed much physical deterioration. The gray at my hairline is a bit more pronounced and in a certain light I can see tiny wrinkles on the backs of my hands, but overall I am holding up pretty well.

We went out for pizza tonight. Noah was not as badly behaved as he was last week at the Thai restaurant but I can’t say he was well behaved. June was restless in her high chair so I took her out and from then on it was a struggle to keep her from grabbing everything off the table while she was on my lap or eating off the floor while she was crawling under the table. My forty-year-old self thought somewhat nostalgically of the birthday dinner my thirty-year-old self must have had. Unmemorable though it was, I’m reasonably sure no one at the table cried and Beth and I must have finished quite a few sentences in a row. Even so, I know how my thirty-year-old self would have cherished a glimpse of this future, these children, however frustrating and imperfect. There was a woman at the next table over eating with her children. The oldest looked about ten and the youngest four or five. There was no one crying or whining and everyone stayed in his or her seat. Both my thirty-year-old self and my forty-year-old self looked on with interest, wondering what forty-four will bring.