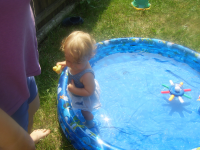 On Saturday morning instead of diving right into our normal weekend chores, Beth set up the wading pool and the sprinklers in the backyard. We had an extra day of weekend due to the Memorial Day holiday and the day had a relaxed feel. June amused herself stepping in and out of the pool over and over again. Noah ran through the sprinkler. Beth took pictures and she and Noah shot a little movie, a new pastime of theirs. (For a look at their first effort see www.noahsmovies.com. They even composed the music!) Neither of us wore a watch, but we both suspected it was getting on lunchtime. I knew I should feed June so she didn’t melt down before her nap, but I didn’t want to get up out of my chair. It felt like one of those study breaks in the library in college when you went down to the basement to get a snack from the vending machine and you ran into friends hanging out and talking and all sense of time and responsibility melted away and all of a sudden it was an hour later and you still hadn’t done your reserve reading.

We did linger too long, but it was Noah who had the tantrum. Something was wrong about the movie. He hadn’t shot the right scene and for some reason he couldn’t go back and do what he wanted. He lay on his back in the grass and cried.

“Do you suppose this happens to Martin Scorsese?” Beth asked. I shrugged and took June inside. A minute later I was back with a couple slices of baby Swiss for Beth who was waiting out the tantrum. I figured it would be a while before she got any lunch.

Saturday afternoon and Sunday morning we passed the kids back and forth while we cleaned and grocery shopped. Beth took frequent phone calls from her mother. Andrea and her three sisters (Carole, Susan and Jenny) were taking a long weekend road trip through West Virginia and we were planning to meet up with them in Harper’s Ferry on Sunday afternoon. Their plans kept shifting and failing to coalesce, however, frustrating Beth, who wanted to make hotel reservations for Sunday night.

We left the house at quarter to one on Sunday afternoon without firm plans. We had hotel reservations, but we expected to cancel them and make new ones in a different town. After an hour’s drive and a short shuttle ride from Harper’s Ferry National Park (www.nps.gov/archive/hafe/home.htm) to the actual town, we met the four sisters. Everyone exclaimed over the kids, how tall Noah was getting and how cute June looked in her West Virginia University jumper and socks. Noah proudly showed off his star-spangled American Idol sunglasses, the first reward he won with his good behavior stickers at school. June eyed the sisters with the suspicious look she gives anyone she thinks might pick her up.

The sisters pointed out that we should really make those hotel reservations, and then they vanished. Andrea headed for the restrooms and the others went off in search of bottled water. We were left standing on the sidewalk. I let June out of her stroller so she could stretch her legs in the shade of a tree and she began picking burrs up off the ground and shaking them enthusiastically. Eventually the sisters returned, reservations were cancelled and new ones made and we set out to hike a short stretch of the Appalachian Trail, along the Potomac River.

After our hike, on the way to get ice cream, we passed a Daughters of the Confederacy monument to an African-American man who’d been the first person killed in John Brown’s raid on Harper’s Ferry. A teenage girl skimmed the text and told her younger brother, “It says it’s for the blacks who didn’t fight back.” Not a bad summary, really. It was then that it hit me what an appropriate place Harper’s Ferry was to visit over Memorial Day weekend, several years into America’s involvement in another country’s bloody civil war. Suddenly the park employees in period costume and the renovated Civil-War era storefronts seemed more connected to actual people and events, less a quaint backdrop for the crowds of twenty-first century tourists taking pictures and standing in line for ice cream. Andrea wanted to see the gallows where they hung John Brown, but it wasn’t in Harper’s Ferry. Beth pointed out John Brown’s Coffee and Tea shop and I made a joke about John Brown’s body lying a-moulderin’ in the coffee shop, but it fell flat.

We needed to eat early so we could get the kids to bed so Andrea accompanied us to a Mexican restaurant and we left the aunts at the hotel. We rejoined them in their room after dinner. June showed off her walking prowess, toddling all around the room. Jenny taught Noah how to play hangman. Susan gave unauthorized hints over Jenny’s protests, saying she couldn’t help it if she knew the answers– she was smarter than Jenny because she was older. When Beth said she’d have to stop, Noah said, completely in earnest, “She can’t help it. She’s just really smart.” As we talked, we shared the strawberries Beth had bought at the farmers’ market that morning. They were the first really ripe, locally grown strawberries this year, the kind that remind you what strawberries are supposed to taste like. Beth had bought three quarts. Juice dripped down June’s face and hands and when she grabbed the white coverlet for balance, she stained it red.

The next morning we lingered in the breakfast room. Noah, clad in shark pajamas and Halloween pumpkin socks, sat with the aunts and listened as Carole told a childhood story that ended, “And then my mother said, ‘You were supposed to be watching Susie and now she’s sitting in a bucket of water.’” I’d never heard anyone refer to Susan as Susie before.

On the drive back home, Noah chose to listen to his Banjo Man cd. Banjo Man (www.banjomanfc.com) is a Takoma Park institution. His repertoire consists mainly of kids’ music, but like any bluegrass musician worth his salt, he also plays some Stephen Foster and some twentieth-century songs about the Civil War. Certain lyrics jumped out at me:

When we grow up we’ll both be soldiers
Our horses won’t be toys
And maybe then you’ll remember when we were two little boys.

Back home, I watched Noah and June in the backyard again while Beth ran to the grocery store for corn and watermelon for our Memorial Day dinner and baking mix for strawberry shortcake. Noah had piled the wading pool full of objects he found in the yard in an experiment to see what sinks and what floats. June sat in the grass and watched him. It was a beautiful afternoon, but I felt melancholy. I couldn’t help but think of the soldiers in Iraq, so many miles from their own families this holiday weekend, and of the moms and dads who watched their kids splash in the wading pool twenty years ago and now have only photographs and maybe some grandkids to remember them by. And worst of all– because of the sheer numbers– the almost unfathomable number of Iraqi families shattered by the violence of the past four years.

June was fussy after dinner so I took her to the front porch to swing in the sky chair. I sang her one of her favorite songs, “Clementine,” a song that used to reduce me to tears as a child.

None of my friends or family members is serving in this war. I am almost untouched by it. But I am dreadful sorry.