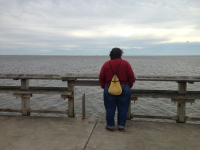 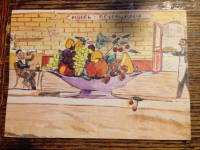 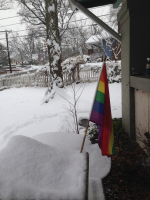 The new year is almost two weeks old. On the first day of 2019, Beth and I went for a hike at North Point State Park. We invited the kids, but they both declined. (They’d both been up to see in the new year and we had not, having left the neighbors’ New Year’s Eve party early in favor of a regular night’s sleep.) There was an organized First Day hike at the park, but high winds felled a big tree, which caused the rangers to re-route the hike off the trails, and along the park road and down a pier into the Chesapeake Bay. The rangers had said it wasn’t actually forbidden to walk the trails and it didn’t seem that windy, so we rambled in the woods a bit and then went home. That night I made a pot of black-eyed peas for good luck, but I ended up burning it. I salvaged just enough so everyone could have a scoop on brown rice with smoked cheddar on top and vegetarian sausage on the side. Still, I had to wonder if the fallen tree and burned peas were some kind of bad omen.

It certainly could have been, if Beth or I were federal workers, but luckily our livelihood doesn’t depend on the President’s tantrums. My friends who work at the Department of Justice and the Smithsonian aren’t so fortunate. Even though I had work, I was out of sorts, a bit of post-holiday letdown, I guess. (Even the swearing-in of the new Democratic majority in the House didn’t help much.) I’m in the habit of taking a short walk every weekday I don’t have some other errand getting me out of the house and I’ve noticed since I started doing this a little over a year ago, it improves my mood, so I decided longer walks were in order. I tried to get off sidewalks and onto the muddy paths by the creek at least a couple times a week and I found even a half hour walk in the gray and brown winter woods can be restorative. Truth be told, though, the chocolate chip cookies I made one evening were even more cheering, if less healthful.

Every year I make the same spice cake we had as a wedding cake on both those days. The first time around, it had white frosting with little purple frosting violets, but I’m not much of a cake decorator, so ever since then I’ve made a lemon glaze for it. But this year, I switched to orange, because my gifts to Beth had an orange theme. I wasn’t originally planning this. I got her a bottle of orange-olive oil that caught my eye in a catalog and then I saw a bar of orange-infused dark chocolate at the co-op and that was when I knew I had to go all the way, so I found an orange, pink, and white striped gift bag and a card with a still life that I think included an orange—it’s an orange fruit anyway, so I’m calling it an orange—and put it in an orange envelope. This is what I wrote on the card:

Knock, knock
Who’s there?
Orange
Orange who?
Orange you glad you married me?

North was unimpressed with my reasons for switching to the orange glaze from the traditional lemon one. “How could you?” they asked, right before I made it, and then demanded, “Does Beth know about this? It’s her anniversary, too.” We are all a little set in our ways sometimes and I am certainly no exception, so I can’t blame them. Anyway, I finished the cake with orange sprinkles. It was pretty. I should have taken a picture for you, but I forgot.

I ordered pizza and hoped it would arrive around the same time as Beth, but it was a half hour late. When it finally came we ate and then exchanged gifts. Beth got me a pair of rain boots, which I very much needed, as my old ones were in bad shape, with multiple cracks in the rubber around the ankles.

After dinner, we ate cake in front of the television, watching the second episode of the new season of Series of Unfortunate Events. We probably could have watched two before North’s bedtime, but this is the last season, so we are trying to savor it.

A snowstorm was predicted to start late Saturday afternoon and it arrived on schedule. When the snow started, I stood at the window and watched it a long time, trying to see the beauty in it, because my bad attitude about snow doesn’t do anyone any good. It even worked, at least a little. It’s undeniably pretty.

We woke to six inches of snow and it kept falling on and off throughout the day today. There was a cascade of cancelled events, including a dinner party friends of ours were throwing Saturday night and church the next morning. The pool and the library (my normal Sunday afternoon destinations) were closed. North was supposed to have a meeting at the theater about a talent show they’re directing (they won this opportunity in an auction) that was also rescheduled.

When I got up this morning and couldn’t find the newspaper, which was never delivered, I gave up on the day having any semblance of normalcy and I decided to forget about breakfast for a while and went back to bed with The Call of the Wild, which North’s reading for school, and read the last four chapters. Later in the day when North asked what I’m glad about, I could say, in all honesty, that I’m glad I’m not a sled dog in the Yukon.

By this morning, eight surrounding counties had already cancelled school for tomorrow, but there’s no word yet from our county. I am trying to resign myself to a closure so if the kids go to school on time, or with a two-hour delay, it will be a pleasant surprise and if school’s cancelled I will greet this news with equanimity. I’ll let you know how that goes. It wouldn’t be a bad day for Noah to miss school, actually. He had a ton of homework this weekend, including but not limited to two oral presentations, and a chapter in his logic book with questions, and he’s working on an scholarship application for Ithaca that requires two five-hundred word essays. It seems unlikely he will finish all that today. So I know he’d be glad of an extra day.

And I’m glad of a lot of things other than not being a sled dog: that I married Beth and we have two great kids chief among them, but I’ll also be glad when Noah walks to the high school bus stop and the middle school bus pulls up to our curb, whether that’s tomorrow, Tuesday, or sometime after that.