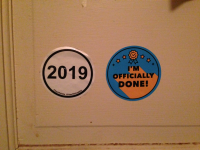 Well, I said I’d tell you how the snow day went if there was one and you knew there’d be one, right? The snow picked up again late Sunday afternoon and evening. We had eleven inches by the time we went to bed that night and after that there was no more accumulation. School was cancelled Monday and there was a two-hour delay on Tuesday. Because the cancellation was announced on Sunday afternoon and the roads were messy, North asked to stay over at Zoë’s house, where they’d been since morning. They came home late Monday afternoon with tales of sledding and making snow sculptures and toting a bag of chocolate chocolate-chip cookies they’d baked with Zoë.

Beth’s office was closed, so she worked at home, and I did, too. Noah kept plugging away at his two Ithaca scholarship application essays and finished them. He’s now all done with applications, though he and I might be taking a trip to visit Boston University next month, as that’s the only school he applied to without visiting.

Champlain College, one of schools we visited last spring (though he didn’t end up applying there), sent an “Officially Done” sticker in one of their mailers, with the suggestion that he wear it when he finished all his college applications. I stuck it to his shirt when he submitted the application and he gamely agreed to let me post of picture of him wearing it on Facebook. Then he took it off and stuck it to his bedroom door, right next to the “2019” sticker he got during one of many gun control protests last winter and spring. It represents the year he can vote in federal and state elections. (In Takoma Park, the voting age for municipal elections is sixteen.) But it’s also the year he leaves for college, so it makes sense for those two stickers to keep company.

He didn’t have much time to celebrate, though, because he had an oral presentation and Logic homework due the next day. He didn’t end up finishing the Logic, but he put a dent in it. I’d been camped out in his room for a couple hours, still reading Jack London (short stories now, having finished The Call of the Wild the day before) and occasionally offering opinions when he’d get stuck with the essays. Once he switched over to homework, I went for a long walk in the snowy woods by creek and through a tangle of side streets in our neighborhood I’d never explored. I actually got a little lost, so the walk was longer than I intended, but I was home in time to make a mushroom and kale frittata for dinner, which we followed up with brownies Beth made earlier in the day. I won’t complain about the snow day. It was okay. I didn’t get as much work done as I would have if I’d had the house to myself, but was good for Noah to have more time to work. That’s a common trade-off.

I was glad there was school on Tuesday, even if it was an abbreviated day. One reason was that it meant North’s winter chorus concert would go on as scheduled. North found out about a week before the concert that they had a solo and they were excited about that, so I gently nudged Noah into coming to the concert, even though he had work to do (including the now overdue Logic). He’s already been accepted to two colleges and he’s missed a lot of his sibling’s performances over the years. Now that there are only a few left it seems more important that he be there. North was happy he came. And perhaps thirty-seven years from now, the two of them won’t be having social media exchanges like this one I had with my sister when I mentioned he was at the concert:

Sara: Just like when you stopped your homework to watch my one 5th grade performance of P.T. Barnum. Oh wait. No you didn’t. #notbitter

Me: He has skipped probably more performances than we could count for homework. I skipped one.

Sara: Yeah, but it was THE ONLY ONE.

Me: That’s not true. I remember going to a District Chorus concert. And various gymnastics performances and field hockey games.

Sara:  I mean the only performance of P.T. Barnum. And I had the lead. And a solo.

Sara: WHY DO YOU STILL NOT LOVE ME???

Anyway… We all had an early dinner and drove out to the high school where the concert was taking place. (North’s school has no auditorium.) The performers had to be there forty-five minutes before concert time so we took our seats and Noah opened up his laptop and worked on his oral presentation until the concert started.

Their solo was in the very first song of the concert, “Remember Me,” from Coco. In fact, it was the first few lines of the song. So the concert opened with Mr. N introducing North and North stepping up to the mike and singing:

It was lovely. We were very proud.  The next Glee Club song was “Never Enough” from The Greatest Showman. Apparently, there was a movie music theme.  There was also a songs-in-foreign languages theme, as the sixth-grade chorus sang in German, Hebrew, and Spanish. (Mr. N said they were putting the “International” into Silver Spring International Middle School.) And later the Advanced Chorus would sing a Polynesian song and one in Zulu.

Toward the end of the concert, the Advanced Chorus sang three poems set to music. “Night Fall,” by Roger Emerson, “Dreams,” by Langston Hughes, and a section of Edgar Allan Poe’s “The Bells.”  While they sang “Dreams,” the lyrics were projected on two screens to either side of the stage.

Hold fast to dreams
For if dreams die
Life is a broken-winged bird
That cannot fly.

Hold fast to dreams
For if dreams go
Life is a barren field
Frozen with snow.

Mr. N made some comments about how the day of the concert was Martin Luther King’s actual birthday and how if he could be there he’d be pleased to see kids of different races and social backgrounds all making music together.

“The Bells” is a particular favorite of mine. I used to teach it. They sang the first stanza, while one student accompanied the singers with jingle bells.

North said this song was their favorite and I liked it, too. I thought the music was well suited to the words and the singing was fast but delicate and precise, just like bells.

The whole concert was over in less than an hour. It was nice North got a solo because next quarter they’re switching their Wednesday afterschool activity from Glee Club to Drama Club and only Glee Club members got solos, so chances are they won’t have a chance for that at the spring concert.

As we left, I was thinking a little sadly about how my father, who died nine years ago on the day of the concert, will never be in the audience for one of North’s concerts or plays. Not that he’d be traveling down from New York for school concerts if he were still alive, but if North gets their way, they may someday have a performance in his adopted home town. And depending on where North’s adventures take them years from now, I may not make every single performance either, but I know I am far from officially done watching my youngest on stage.