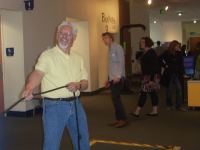 My aunts Diane and Peggy and my uncle Darryl are visiting my mother and stepfather this week so on Sunday afternoon we met up in Baltimore’s Inner Harbor, which made a convenient gathering place between Philadelphia and Washington. My mom’s family lives out West and I don’t see much of them. Peggy has met Noah several times, but never June, and Darryl and Diane were meeting both kids for the first time.

We’d planned to meet outside so the kids could run around if we had to wait, but the older generation arrived first, and the weather, which was supposed to be sunny and warm, turned out to be cold and drizzly, so when we arrived, we went straight inside to the food court.

I felt a bit awkward at first, especially when Darryl greeted Noah as “Jonah” and I couldn’t tell if it was a joke or not. Noah shot me a doubtful glance and I shrugged. June was rather alarmed to see so many new grownups at once and she clammed up, but it didn’t take Noah long to warm up. Soon he was chatting with everyone and impressing the aunts with his vocabulary, though it didn’t seem to me he was saying anything unusual. Is “I’m six, but soon I’ll be seven” an advanced sentence? Maybe it was the syntax.

After the hugs and handshakes and introductions, we headed for lunch. On the way to the tables, I informed my mom that for the first time since she was six months old, June is back on the growth charts, at twenty-two pounds and thirty-one inches. She’s at the very bottom of the chart, but good news is good news. Peggy and Darryl said she looked only a little smaller than their grandson Josiah, who will be two in May.

After we staked out a table in the crowded food court, we split up to get our food. Once everyone was back, June sat in Mom’s lap and ate French fries and Thai noodles and vegetables from Beth’s lunch and mine. Noah entertained the group by singing “Head, Shoulders, Knees and Toes” in German, a trick he learned at his spring break drama camp last month. Usually when my mother and her sisters are together there’s a lot of joking and laughing, but aside from Noah’s antics the mood was more subdued than usual.

The reason was Annabelle. Diane’s daughter Holly is four and a half months pregnant with her first child and she and her husband Matt recently learned that the baby, a girl they’ve named Annabelle, had spina bifida (http://en.wikipedia.org/wiki/Spina_bifida). Diane’s taking it hard. In fact, my mother was worried that seeing my kids might be hard for her. I’m sure it was, but she seemed to enjoy talking with Noah and quizzing him on his reading as we walked from the food court to the Maryland Science Center (http://www.mdsci.org/). He could read the banner on the front of the museum. He knew what “gem” means.

There were plenty of distractions in the Science Center. It’s a very interactive, hands-on museum. Noah enjoyed turning knobs to make balls roll in a track, playing a harp equipped with motion sensors instead of strings and making huge bubbles with a device that looked like a guillotine. Pop helped with this last one by blowing the bubbles into shape after Noah hoisted the blade. Noah and I put photographs in order to track an embryo’s development and again to show a woman aging. Mom and the kids stood in front of a sensor that measured their heights. Mom, Diane and Peggy, for reasons unknown, submitted to an electric shock. In the children’s room, June had a blast at the water table. It was here she let her guard down and let the aunts hear her talking, using two of her well-worn phrases, “Can you help me?” and “I want it back!” after another child took her cup.

On the way out of the museum, Noah and Darryl played with a tug-of-war machine that was rigged to give the weaker contestant an advantage. (It was something about the angle of the rope. It’s hard to read the explanatory signs while chasing a toddler around.) Mom and Peggy stayed behind to shop for Noah’s birthday present at the gift shop while the rest of us headed to Håagen-Dazs so Diane could treat us to ice cream. Outside the museum Noah tried to dance with Diane a little too vigorously (she has bad knees). Diane explained to him that he had “unlimited energy” while her was “limited.”

“I know what those words mean,” Noah said. By now he’d figured out she was interested in words and he was showing off. He then gave a pretty decent definition of both words.

If Noah was still in fine form, his sister was showing signs of exhaustion. She’d only had a half hour nap on the drive over to Baltimore and she looked about ready to nod off into her cup of dulce de leche ice cream, so we said our goodbyes and headed home.

The next morning we had an appointment at the pediatric cardiologist. At June’s two-year appointment last week the doctor noticed an irregularity in her heartbeat. It was subtle; the medical student she had assisting her with patients that day couldn’t hear it even when they had their stethoscopes on June’s chest simultaneously. It was almost surely nothing, Dr. A assured us, but just in case, she gave us a referral to Dr. H for a follow-up visit.

“Are we worried?” I asked Beth once Dr. A left the room.

“No,” she said, and we really weren’t. Beth had a heart murmur all through her childhood; so did my sister Sara. Still, we made the appointment. It was on a day Noah had off school so he came along. I dressed June in a long-sleeved t-shirt with a heart on it, as a joke or a good luck charm.

After a short wait, Dr. H came out into the waiting room. He explained he was going to do an EKG and a sonogram of June’s heart. This was when a little thread of panic started to uncurl in my chest. I don’t know exactly what equipment I’d expected him to use, surely not just another stethoscope; he is a specialist after all. But an EKG and a sonogram sounded more serious than I’d thought.

I don’t know if June picked up on my mood change or if she suddenly remembered the vaccination and blood draw at her last doctor’s appointment, but when it came time to leave the Legos and the bead maze in the waiting room to follow the doctor to the first examining room, she told Beth she was “scared.” Beth reassured her it would be fine.

I couldn’t see June’s face in the examining room because she was sitting on my lap, but Beth told me later she looked very uncertain the whole time she was hooked up to the EKG. Dr. H let Noah hold the tangle of cords while he studied the printout. He said it looked perfectly normal.

We moved on to the next examining room. Dr. H popped in a Magic School Bus video (Noah’s choice) to distract June while he smeared her chest with goop and rubbed the wand across it. And then for the first time since she was inside me, we watched her heart beat. It’s a wondrous, humbling thing to watch, no matter what the reason. Dr. H looked at it from various angles and cross sections. He said he saw the irregularity now; every now and then her heart pauses between beats. I couldn’t see it but Beth did. Dr. H decided to repeat the EKG to see if there was anything he’d missed on the first one. Again, it looked perfectly normal. She was fine, he told us at last. She has a slightly irregular heart rhythm, but there’s no cause for concern. Relief washed over me. We got coffee and pastries at the Starbucks in the lobby and our mid-morning snack felt like a celebratory feast.

That night Sara called me. In the course of our conversation, she asked if I knew about Annabelle. I said yes and she told me she’s been reading Matt’s blog (http://thedawgrun.blogspot.com/). I asked her to send me the url.

Today I read all the posts about Annabelle, starting just before the diagnosis. The tone of the post in which Matt mentions a “a slight elevation in some chemical or other that has to do with neural-tube disorders” reminded me of my nonchalance before June’s heart appointment. Like me, he was pretty sure there was nothing to worry about. Unlike me, he was wrong.

Sometimes it seems like parents live under continuous sniper fire. Mostly we dodge the bullets, so often that we become desensitized to them and fail to worry about every possible thing, but sometimes the bullet hits.

All we can do is brace for the shock, and if it comes, take what comfort we can from our team, those who are pulling for us. Holly and Matt have received tremendous support on and off the blog and they seem up to the tremendous challenge they are facing. I haven’t seen Holly since my sister’s wedding ten years ago and I’ve only met Matt once, so anything I say or do is just a small part of that support, but for what it’s worth, I’m pulling for Annabelle, too.