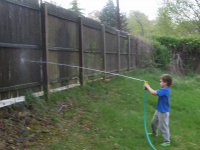 Oh, right, Arbor Day, I thought when June and I stepped off the bus in front of the library yesterday morning and I saw all the little saplings in buckets of water and a small crowd milling around in front of them. Once a year you can get free trees at Takoma Park’s Arbor Day celebration. They set them up on the lawn of the library and anyone can come and take up to five. Last year, we got a black cherry tree to replace a tree we had to have cut down (its roots had been severed during some road work and it was listing dangerously close to the house). Then we hired someone to mow the lawn, as we do most springs for the first mowing of the year, to get it short enough for our push-mower to handle. I forgot to tell the mower that the bare little stick poking up out of the ground in the side yard wasn’t a weed tree and that was the end of the cherry tree.

I wondered if we should try again. The logistics of carrying June, her folded up stroller, the diaper bag and a small tree on the bus home seemed a bit daunting, but still, free trees are hard to pass up. I led June into the library, undecided. There was a storyteller just about to start up in the children’s room. All this and I’d just come to collect a book I’d placed a hold on. The original plan was to dash in, get the book, walk over to our local coffeehouse and post a sign advertising myself as a writing tutor, maybe linger over a cup of chai for myself and a fruit cup for June, then catch a bus home. I started revising in my head. If we stayed for the storyteller (and it seemed mean not to as June craned her head curiously in that direction) it would be too late to go to Savory. I didn’t want to endanger June’s afternoon nap by keeping her out so late she’d fall asleep in transit. If we didn’t go to Savory, we could walk home with the little tree sticking out of the basket under the stroller. It was still risky, from a nap perspective, but I decided to try it.

Luck was with me and she didn’t fall asleep. After lunch and nap, I took June outside to play while I engaged in some spring-cleaning in the yard. The grass is getting long and lush, especially in the side yard, which has always been the dampest part of the yard. The idea was to pick up all the trash that has been blowing in over our fence all winter, gather the wide assortment of toys scattered hither and yon and stash them on the porch, in the sandbox or under the eaves, and pick up all the sticks that would catch in the mower blades so I could mow the lawn the next day. I consulted with Noah, who was sitting at the computer, before I went out. Would he help me with this job for a little extra cash? How much? Two dollars if he stuck with it until the job was finished. How much if he didn’t? It would depend on how much work he did. He was undecided. Beth reminded him his Club Penguin (http://www.clubpenguin.com/) membership is about to expire and he doesn’t have the six dollars he needs to renew it. Noah spends most of his allowance these days on computer games. He made no move to get up. I took his sister outside and began to pick up trash.

After just a few minutes, Noah came out and wanted to help. I sent him back inside in search of garbage bags, one for trash and one for recyclables. He consulted with Beth, who thought I must want yard waste bags for sticks. It took a long while of sending him back and forth to straighten this out. I suspected he might have gotten distracted on some of the trips because he was gone an awfully long time. Once I had my bags, I kept on with the trash while Noah put a few toys on the porch, occasionally wandering off or forgetting what he was supposed to be doing. I cleared the front and side yards and moved onto the back. Meanwhile, June started to melt down and Beth took her back inside to read books and do puzzles.

Shortly after they went inside, I pushed the deflated bouncy castle under the eaves and exposed the bare dirt underneath. Noah spied a worm wriggling there.

“It’s Lowly Worm,” I joked and Noah laughed. The last time we moved the castle, June saw all the worms underneath and insisted they were Lowly Worm, the character from the Richard Scarry books (http://ecx.images-amazon.com/images/I/519EHMJMTNL.jpg). June loves Lowly Worm. It didn’t seem to bother her that these worms did not have faces and were not wearing any clothes, let alone dashing little Tyrolean hats.

Noah crouched down to watch the worm. Then he picked it up on a stick and moved it to another part of the yard. “This is a smart worm,” he exclaimed as it kept escaping from him. I considered telling him to get back to work, but this was exactly the kind of thing I think he needs to do more. We spend about approximately forty-five minutes outside when he gets off the school bus on all but the coldest and wettest days, but I don’t think he focuses on nature much. He runs around and bounces on his castle or his hopping ball. We draw with sidewalk chalk, blow bubbles, swing in the sky chair, pretend to menaced by giant snakes and think of ways to trap them. Then it’s television, homework and computer games until dinner. I rarely see him really looking at bugs and plants and animals like I used to when I was a kid, which seems odd to me, since he’s so interested in science.

One of the pegs used to secure the edges of the castle was driven deep into the ground and I couldn’t pull it out. I asked Noah, who wanted to play with the hose, to soak the ground around it to see if that would loosen it up. It took a lot of wiggling, but I finally coaxed it out. Noah then lay on his stomach next to the hole in the ground, watching how the mud was slowly filling it up. He asked where the dirt went when you made a hole like that. I explained that the dirt around it gets more compacted. Then we talked about how worms aerate the soil and whether or not their poop serves as fertilizer.

Noah picked up a few sticks, and then he declared picking up sticks was boring. It was on the tip of my tongue to tell him that some parts of life are boring, that grownups do boring things all the time. I had a few examples in mind: laundry, washing dishes, etc. But I stopped myself because he knows already; kids do boring things all the time, too. Writing out his list of spelling words four times a week is boring. Feeding the cats every morning is boring. There was no need to lecture him on the virtues of boredom. Instead I asked if he’d like to hose down the dirt and dust off the plastic sleds, then scrub them dry so I could put them in the basement. This was more enthusiastically received.

I kept on with the sticks. There were a lot of them under the silver maple. I fell into a pleasant, mindless sort of rhythm. It was hot, at least eighty degrees. I’m sick, with a nasty cold, and the heat felt like a mild fever, baking the infection out of me. When I was a kid, my mom often told me to go outside and sit in the sun when I was sick so I developed a strong belief that this was a healthy thing to do. As part of the research I do for my sister I’ve been reading a lot about Vitamin D recently, about how many people may be deficient in it because we don’t spend enough time outside and when we are outside, we cover ourselves in sunscreen (http://www.NaturalNews.com/022889.html). It seems like the question is up for debate in scientific circles, but I know it felt healing to me to be moving around slowly in the yard on a hot spring day, getting rid of the clutter.

Beth brought a more cheerful June back outside. When June saw Noah cleaning the sleds with the hose she got very excited and wanted him to spray her with it. Beth took her back inside to change her into her bathing suit. (She tried to get away with just putting her in a swim diaper, but June, never one to do things halfway, insisted on the suit.) The two kids played with the water until June got cold and I needed to take her back inside and get her toweled off and dressed. When I returned, Noah was hosing off the chalk marks we’d made on the fence (a target and a scoreboard for a ball-throwing game we invented for the five to ten minutes of extra math practice Noah is supposed to do every day for Maryland Math Month). I surveyed the lawn one last time and came to the reluctant conclusion that the grass was really too long for me to mow. We’d have to hire it out again. There was more I could do in terms of cleanup, but it was 5:45 and time to start dinner, and the yard really did look a lot better. Noah wanted to know how much money he’d earned. A dollar, I said.

Once in the kitchen, I turned on the radio. It being the first night of Passover, there was a story on NPR about making gefilte fish. I got to thinking about the concentration of spring holidays this week: Passover starting that night, Earth Day on Tuesday, Arbor Day on Friday. All at least in part about rebirth and renewal: finding out you’ve been spared, healing, growing. (Easter would normally be in the mix here but it came early this year.) Prairie Home Companion (http://prairiehome.publicradio.org/) came on the radio at six, as I was boiling linguine and sautéing vegetarian Italian sausage. Garrison Keillor sang:
Oh my sweet, sweet old someone,
comin’ through that door.
It’s Saturday. The band is playin’.
Honey, could we ask for more?

Well, yes. We are so rarely completely satisfied and I am sick and I never get enough sleep, and I can’t figure out how much and what kind of paying work I want to be doing, and so on and so on. But I had a new book to read, a cherry tree sitting in a pitcher of water in the kitchen sink, a pleasant hour with my son and a relatively tidy yard and all it cost me was a dollar.

And that night, for the fifth time in her life and the third time this month, June slept through the night in her own bed. Sometimes you really can’t ask for more.