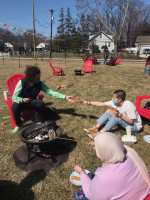 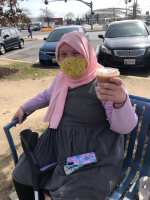 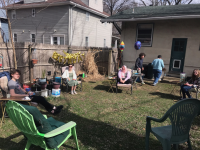 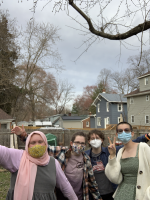 They did not have a slumber party this year, just as they did not last year, for the obvious reason. The first time it happened we felt really sorry for them, thinking their birthday poorly timed, and we made promises about a make-up slumber party later, even as they celebrated with their friends, who came one at a time to visit with them on the porch and eat cake. Now that everyone in the world has had a pandemic birthday, it doesn’t seem like as much of a hardship, although I suppose those of us with spring (and summer?) birthdays will have the misfortune of having two pandemic birthdays. Anyway, North traded the make-up slumber party for an outdoor half-birthday party (with several guests allowed to come simultaneously) in late September, when it had become apparent that restrictions weren’t ending any time soon.

For North’s fifteenth birthday, they had two small celebrations. Over a month ago, Beth made a reservation for one of Montgomery County’s Picnic in the Parks Warm Up Days for the Saturday before North’s birthday. You can rent a portable firepit and up to six chairs or a picnic table with a patio heater for an hour and a half in one of two parks. County employees come by periodically to tend the fire for you.  The program started in February and the last one is next Saturday. I think all the slots are reserved, but it might be worth checking for cancellations if you’re interested. There was one empty firepit when we were there and neither of the tables was in use.

North decided they wanted the whole family to attend. That left two more people and after Zoë, they couldn’t think of anyone they wanted to invite without leaving other people out, so we were a party of five. When Zoë’s dad dropped her off, North yelled across the parking lot, “Look, it’s my best friend!”

Wheaton Local Park is a narrow field between Georgia Avenue and the Wheaton Public Library parking lot. Its winter-brown grass was dotted with campfires ringed with people. At first it felt funny to have a campfire so close to a busy thoroughfare and not a more sylvan location, but eventually you forgot about the traffic and focused on being outside on a beautiful day with a fire to watch (or I did). We didn’t really need the fire for heat, though, as the day was sunny and in the fifties. Most of us didn’t even wear jackets and Zoë was in a t-shirt.

We’d brought takeout from California Tortilla and so we ate that, and then we made S’mores. The fire was really hot, which made it hard to toast the marshmallows without burning them. My first attempt was black and bubbly on the outside and reasonably melted inside and my second was perfectly browned on the outside and raw inside. North achieved perfection after abandoning their first, burned marshmallow, which Zoë deemed good enough to eat. Noah busily made and ate more S’mores than I could count.

Noah took some pictures and when I told North and Zoë to put their masks back on so they could get closer, I said something I sometimes say to my kids when I take a picture of them together—“Look like you like each other.”

“We do like each other!” North exclaimed. And they do. They’ve know each other since they were on a kindergarten basketball team together, the Pandas, as long-time readers may recall. (Zoë was only on the team that first season, but North was a Panda through fifth grade and the team went on to play for three more years.) North and Zoë became good friends after attending basketball camp together the summer they were six and they’ve been best friends since sixth grade. While we sat by the fire, they reminisced about the Spanish immersion trip they took to Colombia the spring of seventh grade and talked about which classes they like this year and which ones they don’t like and what they will take next year in tenth grade. A (mostly fond) conversation about the mother of a mutual friend left me wondering if North’s friends ever talk about me, and if so, what they say.

If they do, they probably say that I am very strict about what movies and television North can watch. North mentioned that when they turn fifteen they can watch some carefully selected R-rated movies and Zoë said they watched Spinal Tap when they were ten, but she didn’t understand it. I said Noah’s first R-rated movie was probably something he watched for school because he was assigned to watch a lot of movies when he was in a communications magnet in high school and he said, yes, it was The Matrix, which he watched in ninth grade. North went on to list their first PG-13 movie, School of Rock, which I let them watch when they were eleven because they were acting in the play (they had to wait two years to watch any others), and their first PG movie, which was Frozen, which they had to wait to see for several months after it came out because they weren’t eight yet, even though all their friends had already seen it. I think this kind of deprivation helps build character or perhaps it will fuel their art when they return to acting.

Three days later, North turned fifteen. They dressed for the occasion in a lavender long-sleeved t-shirt and a short gray jumper, both of which are hand-me-downs from me. I recently let them shop my closet because I have a lot of clothes I don’t wear anymore, but it’s still startling to see them in those clothes, especially the jumper, which I mostly wore during the Clinton administration. It drives it home how much closer they are to being in their twenties than I am.

In between their sculpture and biology classes, we walked to Starbucks so they could claim their birthday reward. They had their first cup of coffee, another new fifteen-year-old privilege. They got a caramel macchiato and a doughnut. I had a latte and a birthday cake pop because I can be literal like that. On the walk there we talked about past birthdays, when they were two and had an Easter birthday (which they say they remember), when they were five and the birthday theme was butterflies and birds and we took their birthday party guests on a birdwatching walk, and their first slumber party, when they were eight. They said wistfully that they hope to have another slumber party someday.

After school, Zoë, Miles, and Maddie came over for cake. It was another warm and sunny day, which was a stroke of luck as the weather can be iffy this time of year. The guests arrived at three and around three-thirty, Beth, Noah, and I joined them in the back yard for cake, ice cream, and lemonade. The cake was strawberry with strawberry-cream cheese frosting and as I was setting out plates, forks, glasses, etc., Zoë was talking up Beth’s cake, saying she always makes good cakes for North’s birthdays. I guess she’d know, having been to all of North’s birthday parties since first grade. While they ate the cake, North and their guests reminisced about Rainbow Alliance at the middle school North and Zoë used to attend and Miles and Maddie still do (well, virtually). They were all members and it’s where they became a friend group. After we’d finished our cake, the mothers and brother went back inside.

I made a tater tot-topped vegetarian chicken casserole for dinner, because it’s a favorite of North’s. They opened presents after dinner. They’d already received money from both grandmothers. First they opened a set of scented candles from one of their friends: lavender, fig, lemon, and spring. Noah wanted to know if that last one smelled like asparagus, but North said it was floral. Next they opened a graphic novel from my sister and chocolate frogs from Noah, which he got because North liked the ones they got for Valentine’s Day (they come with Harry Potter character trading cards), a tie-dyed t-shirt in rainbow stripes, some red-and-white striped summer pajamas, and a rose and black modest bathing suit from me and Beth. But the big hit was a membership to the Donor Sibling Registry, which they can use to locate and contact half-siblings from their donor. This is something they’ve been wanting to do for a while. That evening the kids had seconds on cake while we watched the first hour of Boy Erased, North’s first rated-R movie. We’ll try to finish it sometime this week.

After two low-key birthdays, North says for their sixteenth birthday they want to “go all out.” I’m not sure what that means, but I guess we have a year to find out. Still, there was plenty of sweetness in this one and not just the sugary treats.