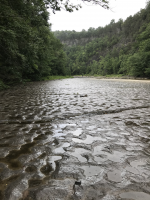 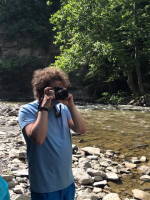 On the second Wednesday of July, North knocked on the door of Noah’s room, where he and I were reading in the air conditioning. When I yelled, “Come in,” they lunged into the room brandishing a wooden sword they’d just finished covering in aluminum foil.  It was a prop for their role as Frederick, the reluctant pirate in a half-day, outdoor drama camp production of Pirates of Penzance.

The camp was two weeks long and held in a park, with socially distanced blocking and choreography. Because there was only half the time as usual to prepare for the show, campers were making some of their props and costumes at home and the performance would be more of a revue of selected songs than a shortened version of the play.

There were contingency plans for rain, including rescheduling camp hours during the weekend or on July 3 (which they had off because it was a federal holiday), rehearsing in bathing suits, or rehearsing at home on Zoom. However, there was no morning rain the first week and this pattern held for most of the second week. By Wednesday evening, however, the director, Gretchen, had become concerned about forecasts for all-day thunderstorms on Friday, performance day. After hurried consultation with all the families of the campers (half as many as usual to keep distancing manageable), she settled on a plan of having an extra rehearsal late Thursday afternoon and to perform Thursday evening, rather than Friday morning.

This meant North was at camp from nine to noon, at a physical therapy appointment in the city at 1:45, then at another camp session that started at five and lasted until the performance began at seven, which was followed by a distanced cast-parent pizza party in the park. This is a normal level of activity for North in non-pandemic times, but quite unusual these days.

At showtime, the audience set up our blankets and chairs in family groups. The show began with a song with complicated choreography using parasols. All the actors were double-cast as daughters of the Major General and as pirates. I was glad the kids and I had watched a 1983 film version of the show—with Kevin Kline as the pirate king, Angela Lansbury as Ruth (the lady pirate), and Linda Ronstadt as Mabel—the night before camp started because I had no familiarity with the show and otherwise I would have had trouble following it.

There were nine actors, aged thirteen to sixteen, and two were Gretchen’s daughters. Gretchen used the fact that the sisters could stand next to each other to help fill in holes in the blocking in more natural-looking ways, to the extent anything in a show like Pirates is natural. (Gretchen had them work on operatic gestures and other techniques of melodramatic acting.) Here’s a clip of North’s first scene as Frederick, reassuring the frightened maidens that he’s no longer a pirate and therefore not a threat.

The scene that got the most laughs was probably the one in which the pirates are hiding behind rocks and there was one pirate left without a rock and when he tried to share one, the other pirates whipped out their swords and admonished, “Six feet!”

It was a fun show and pleasant to watch outdoors as the heat of the day began to ebb. One of the moms had organized a big pizza order and it wasn’t until shortly before it arrived that Beth and I realized we each thought the other had conveyed our order to her. So Beth had to place a separate order for us and go get it, but we were eating pretty soon after everyone else. We were seated within conversational distance of the mom of a girl North’s known since preschool and Zoë had come to watch the performance, so we all had people to talk to while we waited.

Something Gretchen said while she was introducing the play stuck with me. She was talking about the camp experience and how nice it was to have “a little semblance of something somewhat normal.” That’s why we let North attend this camp, though so much time unmasked and with other people, even standing far apart, did make me nervous.

We did another somewhat normal thing the next day—we set out on a summer road trip. The official purpose of the trip was to clean out Noah’s dorm room (which he finally had permission to enter) but we decided to make a long weekend out of it.

Beth was scheduled to work Friday morning because we’d expected North to still be in camp, so she did, and we left around noon. We had a picnic lunch about an hour north of home and arrived in Ithaca about 7:30. At the house we met the two friendly resident cats, a calico named Opal and an orange tabby named Leo. By the time we’d unpacked, procured some pizza, eaten it at the house, and cleaned up from dinner, it was time for bed, past time actually. We were up until about eleven, which for me is late. We’d had a longish wait in the rain outside the pizza place, but while we were waiting a passerby informed us and the other little clusters of people that it was “the best pizza in town,” so that was encouraging.

No one slept well because it’s an odd feature of the AirBnB that none of the windows had any dressings except blinds in the bathroom and a sheer bit of fabric on our bedroom window. So we were mostly up with the sun.

We had breakfast in the house and in the late morning Beth and Noah headed to his dorm, while I had a nap. Only two people per family were allowed in and the appointments were spread out so they didn’t see another family the whole time they were there, except one heading into another dorm. (Noah did hear one on another floor of his dorm.) When they came back to the house, Beth said the whole process was “easy peasy.” They brought take-out back with them and Noah was so happy to be reunited with his camera that he started taking pictures of North eating their lunch before he had his.

We spent the afternoon in a series of parks. We hiked part of the trail to Taughanook Falls, but North got tired, so we turned back and drove to the overlook instead. Before we left the trail, though, we waded into the almost dry river, scrambling over the pocked riverbed, full of puddles.

At Ithaca Falls, there was deeper water to wade and swim in so we stayed there a long time. This was the third or fourth waterfall of the day and it was here Beth said, “There’s another beautiful waterfall around every damn corner.” It’s true. Ithaca is ridiculously lovely. There a reason they said “Ithaca is gorges.” (I swear I’m going to buy that t-shirt someday.) There was a conveniently located log in the water that afforded a nice view of the waterfall so we sat there awhile and Beth said, “This is the best log I have ever sat on.”

We went back to the house where Noah showed us his photos of the trip so far and he and I read a chapter of Homeland. Then we got sushi and ate it at Stewart Park in a pavilion with a view of Cayuga Lake. On the way home we picked up ice cream from Purity, Ithaca’s most famous ice cream parlor and a family favorite.

Everyone slept better because we draped a quilt over the curtain rod in our room and piled pillows in front of the windows in the kids’ room. We had another outdoorsy day planned, but first we fortified ourselves at Waffle Frolic, which is the sort of restaurant where you can get ice cream, Nutella, or frosting on waffles. There are also healthier options, but that’s what we went with, though we did use buckwheat waffles as a base and added fruit and eggs on the side, so the meal was not devoid of nutrition. There were outdoor tables and it was our first time eating at a restaurant during the whole pandemic. It was hard to hear the staff calling out names to pick up food at the counter, but once we got our food it was quite pleasant.

Next we drove around looking for a place we could swim. It had rained hard the night before so a lot of swimming places were closed because of presumed poor water quality. We ended up at Long Point State Park, also on Cayuga Lake. When we entered the park, and we asked if swimming was allowed, the young man in the booth said, “We can’t say you can, but we can’t say you can’t, and we won’t come get you if you do.” This was a surprising response, as we’d gotten a clear-cut no at the last park we’d tried. A little ominous, too, given what happened later, but we decided to go for it. We ate our lunch at a picnic table and then swam in the pebbly-bottomed lake, ringed with ridges of evergreen trees.

As at all the parks, Noah took a lot of pictures. I’d been thinking about how film and photography help him to connect to nature. In other words, it answers the question “What is the purpose of this activity?” he asked us at this very lake about a year ago.

We’d planned to move on to another park, one where drones are allowed, so around two p.m. North and I started to get out of the water. (Beth and Noah were already out.) Once I was out, North called me back to the water, to help them get to their feet, but when I pulled them up, their legs wouldn’t hold them.