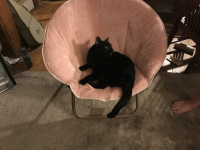 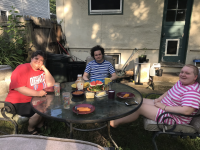 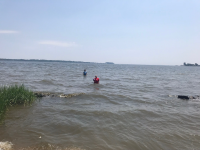 On Friday morning around eight, North found our cat Matthew lying on the living room floor near the front door, half-paralyzed and crying in distress. We were all quite surprised because the day before he’d seemed perfectly normal, but now he had no control over his back legs. The first thing that came to mind was that he had type 1 diabetes and this was exactly how it first presented when he was about a year old. We’d just switched him and his brother Xander from high-protein kitten food to regular cat food and one day his legs just gave out and he collapsed onto the kitchen floor. After some short-term insulin, we got him on food for cats with diabetes and he never needed any more insulin or diabetes medicine. At the time, the vet told us as he got older, the special food might not do the trick anymore and then he’d need to go on insulin. That was sixteen years ago, so I thought that the time had finally come for more aggressive treatment.

We carried him to our bed, which is his favorite place, and brought him some water, which he drank, and for the next few hours, we took turns sitting with him alone or in various combinations. He seemed to calm down and stopped crying so much, but every now and then he’d try, unsuccessfully, to stand. Mostly he just lay quietly, breathing more quickly than usual, occasionally napping a little.

Beth was trying to reach the vet’s office but they never picked up the phone so she drove over there to see if there was anything posted on the door about holiday weekend hours. As it turned out, they were closed for the whole day, so she called an animal hospital in the city. It was the same hospital where our first cat, Emily, received treatment at the end of her life and died, eighteen years ago.

After asking a few questions, the staff person at the animal hospital asked us to bring Matthew in. We’d have to leave him in his carrier at the door and they’d take him inside and talk to us by phone as we waited outside. Even though we knew no one was going inside, North and I came along with Beth and Matthew, just in case we knew the answers to any questions, and for moral support. There weren’t many questions, though, and pretty soon after we left him, they told us to go home and said they’d call us.

Late that morning, the vet called with the bad news. It wasn’t his diabetes. It was heart disease, very advanced. They did an ultrasound and found fluid around his heart and lungs. The immediate problem was a blood clot that was preventing him from moving his legs, but his overall prognosis was poor.

We decided to go through with the euthanasia that day. This time all four of us went to the animal hospital. They are putting animals down in the parking garage because of COVID. This sounds really horrible, but they did their best to make a private space. There was a folding screen making a little room out of a corner. It was near a vent blowing cool air, so it wasn’t oppressively hot, and there was a wooden bench with a cushion on it and side tables with boxes of tissues and water.

Only one person was allowed to be there during the procedure, but we were all allowed to visit with him beforehand. The vet brought our loudly meowing cat behind the screen and stepped out, saying we could take as long as we liked and to call her when we were ready. We sat on the bench and petted him and talked to him and kissed the top of his head. He was wrapped up in a white fleece blanket and part of one of his front legs had been shaved, just above the paw, and the port for the drugs was already attached. My heart sank a little further when I saw that.

When we’d said our goodbyes, everyone but me left, and Beth called for the vet to come back from inside the building. I held Matthew while the vet administered the two drugs, the first to render him unconscious and the second one to stop his heart. They took effect more quickly than I thought they would. The vet listened to his chest with a stethoscope and said, “He’s gone.” She told me it had been the compassionate decision. Or at least that’s what I think she said. Between her face shield and her mask and the fact that we were in a garage, it was hard to hear. I just nodded and she asked if I wanted to stay with him for a while and I did. When I finally lay him down on the bench, I found Beth outside and asked her to call someone to come pick him up and I went back to wait with him again because I couldn’t bear to leave his body alone.

It’s three days later and we’re all sad and kind of shocked. One day we thought he was reasonably healthy for a seventeen-year-old cat—his most serious problem seemed to be a tendency toward constipation and some weight loss we thought was due to his digestive issues—and the next day a vet was telling us he was fatally ill.

We spent a quiet fourth of July. The Takoma Park parade and fireworks were cancelled months ago, so our observation of the holiday consisted of watching Hamilton and having a backyard picnic.  And because it was the most patriotic thing I could think to do, I wrote a small batch of postcards, encouraging Florida voters to enroll in the state’s vote by mail program. (I’ve written over a hundred postcards for this campaign alone.)

The next day, Beth, Noah, and I went to another park. We’ve continued to do this every weekend since mid-May and we have yet to repeat a park. The weekend previous we’d been to a charming little creek off the Middle Patuxent, where we could hear what I think was a good-sized bullfrog croaking underneath a mass of submerged tree roots and we could see dozens of these beautiful black-winged, turquoise-bodied dragonflies.

This week we went to South River Farm Park, which as you might guess from the name is on the South River, a tributary of the Chesapeake Bay. We waded in the salty river and in a little pond (until some kayakers warned us out of it, telling us there were snapping turtles and snakes in there). We saw a Great Blue Heron in the pond, and picked some of the plentiful raspberries we found growing along the trail.

I was sorry North had elected not to come because I think they would have liked it but we weren’t sure whether or not the park had beach access when we set out and they didn’t want to come without knowing for sure. (And actually, this park wasn’t even the one we thought we’d visit. Our first and second choice were filled to capacity and closed.) I was timing how long it took to walk from the parking lot to the water and noting the firmness and slope of the path for future reference. Speaking of North’s condition, after the MRI last week, we learned that they have a herniated disk. It may sound like an odd reaction, but Beth and I were both really happy to learn this because it means there’s a concrete reason for their pain and it should guide the physical therapist’s plan. They already have some at-home exercises to do and they’ll have their first full-length PT session on Thursday.

After we left the park we stopped at a nursery, where I got two dwarf sunflowers and a thyme plant, then we went to a farm stand and got some excellent peaches, peach jam, cantaloupe, and tomatoes. We each ate a sweet, juicy peach in the parking lot before picking up some Chinese takeout for lunch and following it up with frozen custard and Italian ice at Rita’s. It was a nice outing and kind of therapeutic to spend so much time outside.

We brought home some extra fortune cookies and gave one of them to North. It said their luck was about to change.

“That could be good or bad,” I observed, but given that they’ve been on crutches since February, our country’s been in the grip of a pandemic since March, and a cat they loved dearly just died, we decided to read it as a good sign.

He was a beautiful cat and more than a little neurotic, he loved to play with lanyards, which I think he pretended were snakes, and he was a good mouser, even in old age. We will miss him very much.