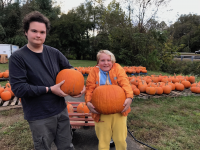 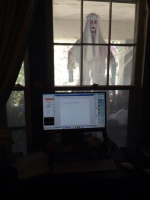 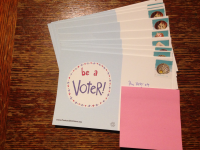 Last Saturday, we made out annual trek out to Potomac Vegetable Farm for our jack-o-lantern pumpkins, cider, kale, pumpkin bread, and decorative gourds. It’s a long drive out there, forty-five minutes when there’s no traffic and there’s usually traffic. It’s just a little farm stand in Northern Virginia, with no corn maze, hayrides, petting zoo, or rides like some other pumpkin farms have. But we started going there many years ago because it’s run by the family of a friend of ours from college, and we are a family prone to loyalty and tradition. The kids have never even asked to go somewhere else. They may not realize it’s possible.

It was a busy day. There was a homecoming at the kids’ preschool and we all went, though not at the same time because North had a rehearsal for Peter and the Starcatcher so they had to go at the very beginning and it made more sense for Noah to go at the end, so he’d have a longer uninterrupted block of time for homework. He was working on a film for his senior seminar about making his Halloween costume. He’s going as a Chinese spyware microchip. The film’s called The Halloween Hack. (One big benefit of choosing this topic was that his costume was almost finished a week before Halloween, which never happens.)

At the Purple School homecoming we hung out in the play yard and chatted with a couple families from North’s class and one from Noah’s and with more from other classes while Noah was inside interviewing alumni and their parents for more episodes of the podcast he produced for the school last summer. It was nice to catch up with some people we haven’t seen in a long time, particularly the family from Noah’s class.

We went straight from preschool to the theater to pick up North and then we drove out to the farm. Rehearsal was over at 4:30 and the farm was closing at six, but Noah’s interviews ran late so we didn’t get to the theater right at 4:30 and then there was a traffic jam, so it was around 5:40 by the time we got to the farm, but that was plenty of time to examine the pumpkins and gourds, make our choices, and take the traditional photographs.

Afterward we had dinner at Sunflower, a vegetarian Chinese restaurant we discovered a couple years ago, which has pretty decent vegetarian shrimp (or at least it seems like that to two adults who haven’t had real shrimp in over thirty years and two kids who’ve never had it). Then we went to Dessert Story for honeydew bubble tea and macarons (North and I split a serving of each) and Nutella-Oreo waffle sundaes (Beth and Noah’s choice). We listened to Halloween playlists all the way there and back, but even so it never got to “Purple People Eater,” which was the only disappointing thing about the outing, from North’s perspective. Beth said it was “a little melancholy” knowing it could be Noah’s last trip to the pumpkin patch with us and I had to agree.

This week Noah burned the midnight oil working on his film and other homework for several nights in a row. Tonight he’s working on his UMBC honors college application essays. Meanwhile I’ve been writing a series of Christmas-themed blog posts for a herbal supplement and tea company. One of them involved finding and testing holiday recipes using tea. Tuesday afternoon, while I was sitting down to compose that one, with a glass of freshly made hibiscus-orange punch at my side, I was amused by the contrast between the cheery tone of the blog post I was going to write and the decal of a ghostly woman with bleeding eyes who peers at me while I work in October, so I posted a picture on Facebook.

My friend Allison (hi, Allison!) responded, “You seriously don’t get spooked by this a hundred times a day?” And actually, I don’t. I did a few times last year, which was the first year she haunted my desk, but this year I’m pretty used to her. Maybe after almost two years since the election of Donald Trump, it takes more than a creepy image to scare me. I mean, consider the last few weeks: the indifference to the murder of Jamal Khashoggi, the pipe bombs sent to Democratic politicians and CNN, and the White House’s attempt to erase trans people out of existence. And by next week there will be some new horror. I can guarantee that.

So I’ve picked up the pace of my get-out-the-vote postcard writing, because the midterm elections are in less than two weeks and in many states early voting is already in progress. So far I’ve written 161 postcards to voters in California, Florida, Georgia, New York, Oregon, Tennessee, and Texas and I’ve got a batch of fifteen more stamped, addressed, and ready to write this weekend. Because no ghost or ghoul would terrify me more than another two years of the Trump presidency with both houses of Congress under Republican control.