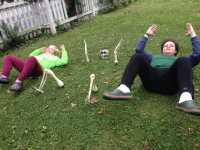 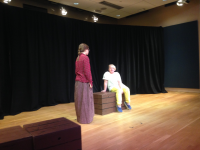 Two Sundays ago I woke thinking of the synagogue shooting the day before. I was full of sadness for the world and the little spark of hope I usually feel after voting was almost extinguished. I muddled through the next couple days and on Monday evening I was idly checking my phone to see if there were any new Postcards for Voters campaigns; I was thinking I was probably finished because the deadline was the very next day and I was out of postcard stamps. When Senator Heidi Heitkamp’s name came up as one of the options I think I may have yelped with excitement. I know I went around the house telling everyone in my mildly amused family. A Senate campaign for an endangered Democrat who risked her seat by voting no on Kavanaugh was definitely worth a trip to the post office.

I initially started writing postcards with the goal of flipping the House and improving the ratio of Democrats to Republicans in the Senate. But some days the only campaigns on offer were ones I’d already written for and down ballot races. It was tempting to learn about a lot of different campaigns and I started thinking about the importance of party building and getting people (especially women) in the pipeline for higher office so I ended up writing for all kinds of campaigns, for Governors, state legislators, even a county commissioner and a school board candidate. I also wrote for a ballot initiative in Florida to restore the voting rights of people with felony convictions who’d served their time. All in all, I wrote 231 postcards, from mid-September to the first day of November. Forty of them were in the last four days of that span.

I tracked down postcard stamps at the second post office I visited—they’ve been hard to find so I think my neighbors had been doing the same thing I was. I’d committed to write twenty-five postcards for Heitkamp and I thought it would be nice to have some on hand for upcoming special elections so I bought forty. But they kept extending the deadlines so I wrote five more for Andrew Gillum in Florida and then ten for Tedra Cobb in New York on short deadlines. I would have kept going but I ran out of stamps again.

On more than one night, I camped out in Noah’s room writing postcards while he worked on homework or his first college application. He’s applying early action to the University of Maryland Baltimore College and the Honors College there. There were four essays for the Honors College, separate from the main essay he’s using for all his college applications, so he had a lot to write, too.

It was a shame it was such a busy week for him, because I would have liked him to come to the vigil in downtown Takoma for the victims of the shootings in Kentucky and Pittsburgh Monday night. North had rehearsal so they couldn’t come either. Beth and I could only stay for part of it because we needed to go pick them up, but it was nice, the speeches, and songs and the candles in the darkness while we gathered with our neighbors to honor the lives lost. My friend Becky, who’s active in gun control groups, was one of the organizers. Thanks for everything you do, Becky.

Noah didn’t skip trick-or-treating on Wednesday, though he was working before and after. He also took some time before dinner to get the battery-operated decorations and the fog machines up and running. I fed everyone a quick supper of grilled cheese sandwiches and canned soup and the kids were off around seven.  I stayed home giving out candy to about forty kids dressed as everything from Astronaut to Zombie. Several people asked to take pictures of our yard. Our around-the-corner neighbor came by with her daughter and posted a picture of our porch on Facebook with the caption “Best House in the Hood.”

When the kids got home at eight-thirty, I was tempted to tell them they should trade candy later because North needed to wash off their bloody makeup in the shower and go to bed and Noah’s application was stuck. He’d tried to submit it before dinner and the Common App site wouldn’t recognize the PDF. But it wasn’t really a crisis because it wasn’t due until the next evening and I realized it was probably the last time the kids would ever trick-or-treat together, so I didn’t rush either of them along.  It all ended well. Noah tweeted to the Common App before he and North left and they responded quickly with a workaround and before he went to bed on Halloween, his first application was in the bag.

The next weekend, Beth and Noah went on their annual fall camping trip. They’d had to cancel a few weeks earlier because of Noah’s workload so I was glad they got it in before the cold weather sets in—it did get down into the thirties at night. This year they went to Catoctin Mountain Park and stayed in a charming but drafty cabin built by the Civilian Conservation Corp during the Depression. Noah worked on overdue logic homework that fell by the wayside while he was working on a presentation for his senior seminar and the UMBC application, but they also hiked and made S’mores and relaxed.

Meanwhile back at home, North and I watched The Nightmare Before Christmas and The Corpse Bride, and I took them to therapy and to get their hair cut and to the pool and the library. It was Noah’s half-birthday on Saturday so we all had cupcakes, which we ate separately. That was a little strange, but it was nice when the campers came home and we were all re-united over a dinner of breaded tofu and baked Parmesan-squash rings Beth made for us. They’d also brought home a pecan pie from an orchard they’d visited on the way home.

Today North’s acting class had its last meeting and they performed the scenes they’ve been working on since September. Mondays have been a tight squeeze for North all fall. They generally got off the school bus and I thrust a packed dinner at them, they grabbed their scripts and got on second bus to acting class, which they had to leave fifteen minutes early to catch a third bus to rehearsal at the theater.

So we did the first part of that except I didn’t have their dinner ready because I was going to bring it to the performance. I finished making the curried lentil-vegetable stew, put a thermos full of it into a lunchbox along with a Reese’s peanut butter cup and a couple lollipops from their Halloween stash and got on a bus to the Rec Center.

The kids performed scenes from The Parent Trap, Peter and the Starcatcher, one of the Harry Potter books, and The Hunger Games. In a was a strange coincidence, North ended up in a scene from the same play in which they’re performing at Highwood next month. They’d hoped to be in a scene from Dear Evan Hansen but couldn’t convince any other students to do it with them. So I got a preview of that scene with North in the role of Peter. (In the Highwood version they’re playing four small parts, but more on that in a later post.) The play is a prequel to Peter Pan, and in the featured scene Peter is shyly approaching a girl who kissed him in an earlier scene and who now seems to regret having done it or at least has mixed feelings. North did a good job conveying Peter’s embarrassment and hopefulness. I also liked seeing Grace (the teacher’s daughter who’s been in acting classes with North since they were both three) in the Hunger Games scene. She made an excellent Katniss. The scene was the one in which Katniss and Rue pair up. It made me wonder if I could entice North to read that series with me.

After the scenes, Gretchen had the kids discuss their scenes and explain what acting techniques they’d been using. North had left for rehearsal by that point and I was sorry not to hear what they would have said. Right when the improv exercises—with audience participation—were about to start I slipped out of the auditorium. When I got to my bus stop North was still at theirs (directly across the street) sitting on a bench, illuminated by the streetlight, eating lentil stew out of their thermos. We waved at each other. My bus actually came first, even though I’d stayed inside ten minutes longer.

Even though it was cut a little short, it was nice to see North up on stage. I always enjoy seeing them in their element. And it also kept me busy on a day when I was full of nervous energy about the election tomorrow. We’re all a bit spooked now, but soon we’ll know a little more about what the future holds, for better or for worse.