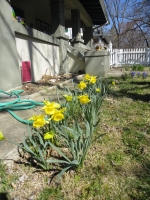 Maybe it was because had been getting light earlier or maybe it was just one of those random fluctuations in the kids’ sleep patterns, but for a few weeks before the time change they had been waking up early.  Earlier than their usual early, I mean. They are supposed to stay quietly in bed until six a.m. and then Noah is allowed to read and June, until Sunday, was allowed to come snuggle with us in bed.  She’d been doing that with disheartening regularity, right at six o’ clock on the dot, instead varying her entrance time within the 6:00 to 7:00 hour as was her previous habit.

Now when June was three and four years old, she’d usually fall right back asleep between us, and then the three of us would get some more rest, but that hadn’t been happening much recently.  Instead, there was more kicking and pulling off of covers and chatter than slumber once she came to join us.  Coming in at the earliest allowable time also meant that on the all too frequent mornings she woke me up at 5:30 because she’d forgotten to look at the clock or she’d lost her pacifier (yes, she still sleeps with one) or she wanted to tell me about one of her dreams I couldn’t get back to sleep, knowing she’d be back at 6:00.

So some time in February I started thinking about how June was close to the age Noah was when we pushed back his snuggle time to 6:30 on weekdays and 7:10 on weekends (“Welcome to 6:47”). And I started thinking it was time for a change. The late February weekend when June woke me before six on Saturday and Sunday put me over the edge.  I realized that pushing back the time she’s allowed to enter the room would not stop the unauthorized forays to our room (and in the short run might actually increase them) but it would give me more time to fall back asleep when they occurred. When I told Beth I was thinking of changing the morning rules she said, “Please!” so I knew she was on board.

I was only waiting for a good time to break the news to June when I realized switching over to Daylight Saving Time would create the perfect opportunity because it would be easy for her to stay in bed until seven the first day and then we’d just need keep her in the habit.  So on Saturday I told her the new rules—6:30 on weekdays and 7:00 on weekends–stressing it was because she was getting older and these are our rules for older kids. She wasn’t happy about it, but I didn’t get as much pushback as I expected. Maybe I did a good job selling the big kid angle.

As expected, the first day was easy.  We set the clocks forward an hour and also set the time June was allowed into the room forward an hour, so it was a wash, and it felt pretty much like a normal Sunday when she popped into the room at precisely seven a.m.  I asked her how long she’d been up and she said since 6:42, so that was an eighteen-minute sleep bonus for the grownups, I suppose.

She took a brief nap that afternoon so I let her stay up until 8:20 (thirty-five minutes past her no-nap bedtime) and she fell asleep easily.  Noah said he didn’t think he’d fall asleep when I put him to bed, but if he had any trouble he was quiet about it. I didn’t hear any tossing or turning. I fell asleep pretty easily at my normal bedtime as well.

“Mommy, it’s 6:40,” June whispered.  She was standing by my bedside in the dark, the deep, quiet kind of dark that makes anything but sleeping seem like a very poor idea.

“C’mon in,” I mumbled and she climbed in. It felt early, too early, even though I’d gotten about the same amount of sleep as usual. I wasn’t up for reading a story until 7:15, but I then I read it and we got up and everyone got to work and school on time, though it felt like a bit more of a scramble than usual.  For instance, June and I were having a leisurely conversation in the kitchen while I made her lunch when I glanced at the clock on the stove and saw it was 8:12, only eight minutes until we needed to be at the bus stop and I stopped whatever I was saying to urge her to go get dressed.  I went to check on her several minutes later and found her out of her pajamas but wearing only a pair of flowered underpants and apparently not in the process of putting on clothes.  I pulled a shirt over her head and socks onto her feet while she got into a pair of leggings, then I brushed her hair into a sloppy ponytail–“no time for pigtails”– I told her and we were out the door.

At the bus stop I listened to parents of third and fourth graders complain about their kids having to take the MSA (Maryland’s No Child Left Behind tests) on the day after a time change.  Fifth-graders don’t start the tests until Wednesday, so I didn’t have to worry about that.

The kids got into two fierce arguments that evening.  The first one was about the rules of a soccer game they were playing before dinner (longer daylight and a light homework day for Noah facilitated this game) and the second one was over ownership of a candy necklace.  Two squabbles in one evening would not be unusual but they were really mad, crying and screaming at each other and using escalating words like “cheating” and “stealing.”  I wondered if the time change was making them out of sorts.  Once June had calmed down and we were talking about what had happened, she said they’d been “bitten by the argument bug,” quoting a favorite book of hers.  I suggested a make-up hug before June went to bed and they complied, but Noah was half-hearted about it.

Meanwhile, Noah was in the bathroom singing “Fifty Nifty United States” with a good deal of brio.  Then he popped his head into the bedroom and said, as if just noticing, “It seems really dark. It must be the daylight savings time.”

I wasn’t awake enough to respond. I guess it’s going to be this way for a while, but June’s doing a great job sticking to the new rules, and I think when I finally adjust to the new time, I’ll appreciate having a little extra time to sleep in the morning. Three days out, I’m cautiously optimistic.

Meanwhile, other things are springing ahead besides the time.  June will be six in ten days and we’ve been busy planning her party.  The theme is cats and she and I spent a lot of time selecting and ordering cat-themed plates, cups and goody bag loot–pencils, pencil sharpeners, erasers, bookmarks and stickers all in either Hello Kitty or Cat in the Hat patterns, plus cat bracelets and cat rubber duckies. June drew her own invitations with pictures of birthday hats and cats and Noah made an insert with the date, time and place info, plus a graphic of the number six and an exclamation point made from Hello Kitty’s face and the Cat in the Hat’s hat. Then June made a large drawing of a cat and seven tails for a homemade pin-the-tail-on-the-cat game and Beth and June purchased a piñata while they were grocery shopping on Sunday.  The party is not until the weekend after next but June’s in a state of high excitement about it.

Spring is also in evidence in the yard, even though it’s still officially winter.  Our crocuses are finished and the daffodils and hyacinth are in bloom, with tulips and even tiger lilies putting up shoots.  We have light and dark purple hyacinth. The dark ones we got last year in a pot as a condolence gift from our friend Megan when Beth’s dad died.  I planted the bulbs and they came up in February and started to bloom in early March right when I hoped they would. On Saturday, the first anniversary of his death, they were in full bloom. I like having a small living memorial there, to let us look back, even as we spring forward.