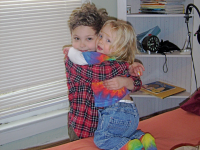 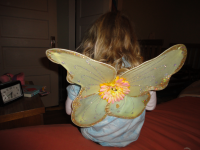 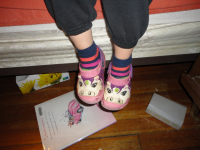 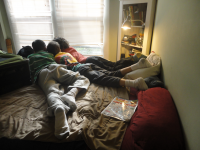 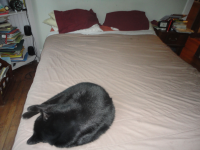 We bought a new mattress over President’s Day weekend and I was going to write a valentine to the old one. I was going to tell you how we bought it while I was pregnant with Noah after thirteen years of sleeping on a futon and how my water broke on it, not once but twice, and how I nursed my babies on it and co-slept with them on it.

I had a pretty good title for the post—from the penultimate book of The Odyssey. As Odysseus explains:

There was a branching olive-tree inside our court,
Grown to its full prime, the bole like a column, thickset
Around it I built my bedroom…

He turns the tree trunk into the headboard, making the bed impossible to move. The symbolism is fairly clear, given that Penelope waits for him faithfully for twenty years.

I don’t know if it’s a natural outgrowth of having co-slept with the children until they were each around three years old, but everyone spends a lot of time in our bed.  June comes in to snuggle with us most mornings as early as she’s allowed (six-thirty on weekdays, seven on weekends), I read to both kids on it almost daily, it’s where we gather for our nightly poetry reading, and when the kids are sick enough to spend the day in bed, they are just as likely to spend it in our bed as in their own.  Even though the kids have slept in their own beds for years now, it’s still a family bed. Like Odysseus’s bed, it’s our Great Rooted Bed, more of a family gathering place than anywhere in the house except the dining room table.

I was going to tell you about the last time Noah and I talked on that mattress. I was taking a nap on Monday afternoon (laying down on all those mattresses in the store had made me sleepy) when he interrupted the nap to come in and talk to me about a homework assignment he’d been wrestling with all weekend and after talking it through with me in the darkened room, he finally settled on his thesis statement.

And I was going to tell about the last time June came in for her early morning visit on that mattress yesterday morning, how she was bouncing around on the bed, playing with a balloon she got over the weekend until she settled down long enough for me to read her a story.

I was going to mention how after the kids left for school and before I started to work that same morning, I settled into bed to read Ulysses (my book club’s latest selection) and how in the afternoon the cats came to nap there, even though there was none of the usual sun they love there, as it was a cold, gray, sleety day.

Except those weren’t the last times we did any of those things on that mattress because it’s still here.  Yesterday afternoon, I showed the delivery people to our bedroom and the kids’ room, where they were bringing the new mattress and pillows for us, and new bunky boards for the kids’ beds.

One of them hauled the mattress off the bed and turned it on its side, inspecting it.

“Do you have a problem with bed bugs?” he asked.

Then he showed me a tiny round black bug he’d removed from the mattress with his thumbnail and informed me that we did indeed have a problem with bed bugs.  He said if they left the mattress with us it would void the warranty and he recommended we delay delivery until after we get the whole house fumigated.  So I sent everything back.

And now we’re considering delaying the purchase of a new mattress, because we paid more than we really intended in the first place, and having an exterminator over is unlikely to be cheap.  We definitely need a new mattress.  The old one is over twelve years old, Beth has back problems, and when I took the cover off to prepare for its departure I noticed there are two depressions where Beth and I sleep.  But since we have to wait anyway, we might do a little comparison shopping or even put the replacement on hold for a while, if the cancellation fee for the mattress we ordered is not prohibitive. Then again we might also stick with our original purchase because when I talked to the customer service representative today and told her we might need to cancel the order because of the cost of fumigation, she suddenly started talking about a discount, which I honestly wasn’t expecting.

I am feeling a little less sentimental about the old mattress now that I know it’s harboring vermin, and now that getting rid of it and procuring a new one is likely to be more work than we anticipated. I suppose it could be a blessing in disguise that we decided to buy a mattress right now because none of us has any bites we’ve noticed. I’m hoping this means the infestation is in its early stages and should be easier to contain.  Having been through a well-established lice infestation fifteen months ago (“A Lousy Birthday” 11/23/11), I can say when it comes to bugs, you want to catch them early. And I have to say it makes me a little uneasy how much the bug the delivery guy showed me looked like a louse, because I think I’d rather have bed bugs than have lice again, but maybe that’s just because I’ve never had bed bugs before.

All day yesterday I kept going back and looking at the bare mattress and box spring, trying to judge whether the little black specks I saw there are dead bugs or just dirt. It was hard to tell. In the dozen or so times I checked I didn’t seen a live bug. But then as Beth and I were putting the mattress cover and the sheets and covers back on the bed I’m pretty sure I saw one on the underside of the mattress cover.

So I’m feeling unsettled, but we’ll take care of the problem and eventually we’ll have a new mattress. It will be new (and bug-free), but our Great Rooted Bed should remain otherwise the same, one of our favorite places to come together as a family.

Not a man on earth, not even at peak strength,
would find it easy to pry it up and shift it.