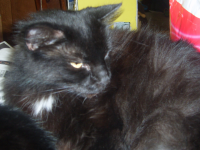 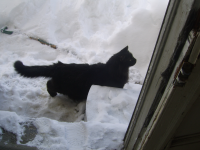 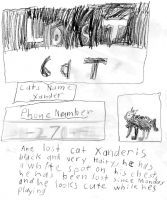 We have two cats, Matthew and Xander. They’re brothers, from the same litter. We got them the summer Noah was two, from the county humane society.  The shelter said they were four months old but I didn’t believe it. They were much too big to be that young, I thought. But then they grew and grew and grew and soon I realized it was no error.

They are now ten years old, big, black, golden-eyed cats.  They look similar to people who don’t know them well.  To me they look different: Matthew has short, smooth, glossy fur and he’s black all over, while Xander’s fur is medium-long and fluffy, with a white patch on his chest and another on his belly.  After their rambunctious kittenhood, personality differences began to emerge as well.  Matthew is shy of strangers, prone to anxiety, and a homebody. He’s happiest curled up with Beth or me or the kids while we read in bed. He ventures outside occasionally but he wants back in the moment the door closes and he never leaves our yard.  Xander is bold and friendly, twining around the leg or jumping into the lap of almost anyone who comes into the house.  The video of our wedding includes a moment when Dan stops officiating the ceremony and bends down to pet Xander, who’s rubbing up against him.

Xander’s also a wanderer, with notched ears to show for it.  From the beginning it was almost impossible to keep him inside and after a couple years we gave up trying. We had both cats micro-chipped and hoped for the best.  Xander even went out after the big blizzard three years ago when we had a few feet of snow in the yard. He walked under the eaves, exploring where he could, though he kept his ears back much of the time to express his disapproval of the unaccustomed state of his realm. Beth made a Facebook album of him entitled “Xander Goes Out and Stubbornly Refuses to Admit His Mistake.”

Xander spent the night outside on Monday.  This is not unusual, though in the winter I do try to see if he wants back inside before we go to bed.  By Tuesday night he hadn’t returned and that was strange, especially given the cold, wet weather. (It hailed that morning.)  By Wednesday Beth and I were both quite worried. He’d never been gone two nights in a row.  Beth reported him missing to the micro-chipping company and they contacted local shelters with his description, screened leads and passed them on to us, and generated posters we printed and put up around the neighborhood and distributed at June’s school bus stop. As June and I tacked posters to telephone poles, we put almost all of them underneath posters for another neighborhood cat, Neko, who had been lost for weeks.  I’d noticed these posters everywhere before Xander got lost and I impressed with her people’s dedication to recovering her.

Beth and Noah responded to the problem with electronic communications.  Beth posted to the neighborhood listserv and made a Facebook page for Xander where people could leave messages and Noah made a Google Plus page. I thought it was fitting Xander was now on more forms of social media than I am, given his highly social nature. Noah also made a poster with one of those QR codes you can scan with a smart phone to get to one of Xander’s web sites. We started getting phone calls about sightings, but they were either of a different cat (one with a docked tail), or of a cat seen startlingly far from home, or on our block but days ago.

Meanwhile, Beth and I were imagining all kinds of unhappy endings to this story.  Had he really crossed our busy street as one of the sightings indicated?  Had he crossed any other busy streets? Had he encountered a fox as one of our neighbors unthinkingly suggested?  She meant well, I think. She was after all calling to say she’d seen him in her yard two days earlier.  Was he lost?  Had he had a heart attack? Years ago the vet noticed an irregular heart rhythm and told us that sometimes cats with that heartbeat up and die of heart failure with no warning in middle age.  Beth, who’s good at worst-case scenarios, was even imagining he’d fallen into the clutches of a gang of cat-torturing kids.

I told June happier stories.  Maybe he got lost and another family was taking care of him until they figured out where he lived.  June thought this was likely, and that he might have even planned it that way, in order to expand his social circle. She was not particularly worried and confident he would return.  Noah made no predictions, but he did tell me quietly that he missed Xander.  Matthew was unsettled and howled so much at night that Thursday night we let him sleep with us, and that seemed to calm him.

Meanwhile, June determined to take matters into her own hands and make her own hand-lettered posters but she only had time to make one before school Thursday so after long discussion, she decided to give it to the bus driver because she goes all over the neighborhood.

Friday morning June made another poster and Noah and Beth helped her scan it and make enough copies to give out to all the kids who ride her bus, as they were the most likely to live in the neighborhood. (June’s in magnet Spanish immersion program so some of her classmates live in other parts of Takoma Park or in Silver Spring.)  Beth was trying to get Noah to stop helping with this project and focus on getting ready for school.  He was so late she had to drive him to school. While they were walking down the driveway, Beth thought she heard a meow.  She hesitated because she’d been thinking she heard meows all week, especially while in the kitchen, which faces the driveway.  “I hear meowing,” Noah said.  So they started looking in the windows of the house next door until Noah saw Xander’s face in a basement window. Noah came dashing into the house to share the news and soon all four of us were crowded around the window, looking at and talking to Xander, who was howling back at us.

I need to stop here and tell you about the house next door. It’s been vacant since we moved here, in the spring of 2002. It’s not abandoned precisely because the owners do occasional, slapdash maintenance on it, but it’s in bad shape. In fact, it’s been condemned for a year or two. In the time we’ve lived next to it there have been squatters in the house and its garage. Once I saw a raccoon climb out a third story window onto the branch of a tree.

There’s a broken basement window at the back of the house that seemed to be the only entrance into the boarded up house.  As I was peering into the basement I noticed another cat, an orange cat with a pink heart-shaped tag on her collar. It was Neko! We had found not one, but both missing cats.

The problem now was freeing them.  From the broken window they must have used to enter the basement to the floor was a long drop. The window was unfastened and swung inward but there was a metal frame dividing it in two.  It wasn’t clear if we could get a ladder through it or if an adult would fit.  We didn’t know how to reach the owners of the house; we don’t even know their names. Beth called the police non-emergency number and they referred her to animal control. She was informed they only come rescue feral cats and as neither cat was feral, they couldn’t help. Next she called Neko’s people, one of whom came over at once to see if it really was Neko. It was.

By this point Beth had left to drive Noah to school.  I showed Neko’s person, Kevin, how the window swings inward and he said, “You know, since the window is already broken, it would only be entering.” I agreed, but said we should wait for Beth to get back.  He went home to change clothes and fetch his fiancée.  Beth got back before he did and we started looking for other points of entry into the house.  I noticed the windows around the corner were much closer to the floor.  We couldn’t open the first one we tried, but the second one was open and covered with wire mesh that looked like it would come off pretty easily. I went inside to get her a hammer and she set to work.

She had it almost off by the time both Neko’s people arrived, Kevin now wearing a sweatshirt that said, “Deny Everything.”  Xander came out with minimal coaxing.  I carried him back into our house and June cried, “Xander in the house!” I hear it was a little harder getting Neko out because she was more spooked but eventually Kevin was able to reach in far enough to pull her out and wrestle her into her carrier with his fiancée’s help.

I had just enough time to pack June’s lunch and get her to the bus stop, where I shared the joyous news with everyone.  When I came back I saw Xander made a quick tour of the house then collapse under the dining room table and fall deeply asleep. Oddly, he didn’t seem ravenous. He’d eaten some food I lowered through the window in a small plastic tub on a string before we got him out of the basement but he didn’t finish it and he didn’t eat again immediately upon getting home. I am still wondering what he ate and drank in the three and half days he was gone.  And how long he was in that house.

We are all happy to have him home, though Matthew was initially angry, as he often is when Xander’s been out of the house for a while. I’m not sure if it’s the strange smells Xander brings back or if he’s mad at him for worrying him. Anyway, there was a lot of hissing yesterday but they have made up enough to sleep on the same bed.

I went for a walk this morning and took down all our Lost Cat signs as well as quite a few of Neko’s.  And this afternoon Beth went to the hardware store to buy wire to cover the broken window because while we probably can’t keep Xander in our house forever, we do want to keep him out of the house next door.