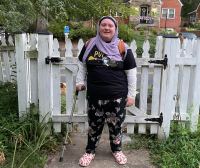 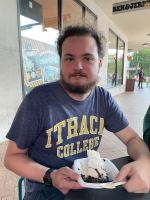 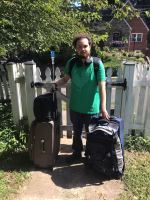 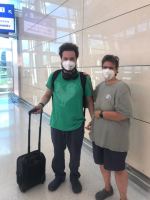 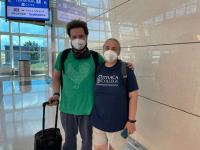 It was a big week around here. North started eleventh grade on Monday and Noah boarded the first of three planes that would take him to Queensland on Friday evening. As I write on Saturday morning, he’s on the second one, from Los Angeles to Sydney.

Beth thought North would wear eyeliner on the first day of school because they’ve only been allowed to wear eye makeup since they turned sixteen last spring, and it was a big deal to them at the time, but they said they didn’t want to get up any earlier than they were already, plus they didn’t want to “set expectations too high” right off the bat. (It was Thursday before they wore any makeup to school.)

North didn’t have too much to report when they came home other than that their painting teacher was the only one to ask for students’ pronouns (the English teacher asked on a subsequent day) and based on a story about his glory days playing high school football, they think their AP World History teacher is going to be full of boring stories.

More information trickled out over the course of the week: They’ve switched from taking Spanish to French, and they can now say, “I prefer cats,” when asked if they like cats or dogs better. They had to research different kinds of computers based on buyer specifications for their tech class. AP World History started off with a geography unit and then moved on to the Song dynasty in China. Their AP Lit class is mostly seniors (because they chose to take it before AP Comp instead of the other way around). They had to pick three celestial objects to research for a poster in Astronomy and they went with dwarf planets, moons, and black holes. The fall play is going to be Clue. They’re auditioning for a part, and they’ve also applied to be costumes manager, so we’ll see which they end up doing. (If they get an ensemble part, they may do both.) They’ve also applied to be a play reviewer (for plays at other high schools). They say only about a quarter of kids are still masking and when I asked if that was enough for them not to feel self-conscious, they said yes.

To a Land Down Under

Meanwhile, Noah continued to tie up loose ends for his trip. He got the letter he needed to take meds into Australia on Monday, four days before his departure. (Speaking of letters from doctors, the letter North needed to take their meds to camp arrived a few days after they got back from camp. I’m glad it wasn’t the other way around because I think customs would be less likely to bend the rules than North’s camp.) Beth got him some Australian cash. The bills are made of flexible plastic and feel strange in your hand if you’re used to paper money. He got his hair cut on Wednesday and he wasn’t happy with it because it was shorter than he wanted. Independently of each other, Beth and I both said it wasn’t as bad as the shortest haircut he ever had (in eighth grade). Apparently, that’s the benchmark.

Between Tuesday and Thursday, in different combinations of people, we got halfway through season 5 of Buffy the Vampire Slayer (our revised goal for the summer), finished season 6 of Blackish and season 2 of The Strain. Any show that anyone was watching in a group that did not include Noah was put on hold while we made progress though shows he was watching. He and I finished reading Sourcery (from the Discworld series) on Friday morning. It was the eighth novel we read this summer, all of them fantasy, science fiction, fantasy-adjacent (Terry Pratchett), or science fiction-adjacent (Cory Doctorow). My favorites were all three books in The Magicians trilogy, but I enjoyed everything we read. To finish Sourcery in five days, we had to read for about an hour a half a day, instead of our usual forty-five minutes to an hour, so it was a bit of a rush, but we both wanted to finish one more book.

On Thursday, Noah’s last night at home, we went out for ice cream again and he chose Ben and Jerry’s. The kids split a brownie sundae. At the patio table Beth quizzed North for their geography quiz the next day. After we got home, Noah and I watched The Strain and North read aloud from the almanac desk calendar we read from at bedtime, Noah started printing his boarding pass and other official documents.

Noah had a late afternoon flight. North had wanted to come to the airport, and we considered picking them up from their bus stop or directly from school, but in the end, we decided it would be cutting it too close, so they settled for waking him up to say goodbye (with his consent) at 6:30 when they left for school.

We read the last sixty-odd pages of Sourcery. I did one last load of laundry with his clothes in it, and he folded it. Beth and I worked, and Noah finished packing. He wanted to know if when we took his by-the-gate, back-to-school photo for college departures if we included luggage or not, so I checked my blog photo folder and the answer was there one with and one without (and no gate photo for sophomore year, because he spent that year at home). I asked how he’d prefer it and he said with, so around 2:15 we piled his luggage around him at the front gate and took his picture with it before we put it in the car. Ten minutes later we were on our way to the airport.

As Noah was checking his baggage at the international counter, the clerk wanted to see his visa and then commented that the paper Noah produced wasn’t a visa, but a letter stating a visa had been approved. Sounding doubtful, he said he’d see if that was good enough, typed on his computer, asked some questions, and after an uncomfortably long silence, told him to start loading his bags on the scale. So, that was a little nerve-wracking.

Beth and I watched Noah go through the security line, load his things on the conveyor belt, and go through the body scanner, and then he was walking away from us with his carry-ons, headed for another continent. I only teared up a little in the car on the way home. Saying goodbye at the beginning of a new school year is still hard, but it’s gotten easier each time we’ve done it. Or maybe it hasn’t sunk in yet.

Friday also marked one year since my last period, so I am officially postmenopausal. When my mom hit this milestone (also at age fifty-five), my sister told her she was a crone now and she was not pleased to hear it, though Sara just meant she had entered the age of wisdom. In the maiden/mother/crone progression, though, I feel mother is still the most relevant stage for me, as I have a kid at home, at least for a couple more years.

As if watching my eldest embark on a fourteen-time-zone journey and reaching menopause on the same day wasn’t enough, it was also the one-year anniversary of my diabetes diagnosis. My most recent bloodwork (done a couple weeks ago) was good. My 1Ac (a measure of average blood sugar over the past three months) was a smidge higher than the last test, in February, but still in the lower half of the prediabetic range. That doesn’t mean I don’t have diabetes. It just means that with medication and dietary changes, my blood sugar is the same as an unmedicated prediabetic. My nurse practitioner seemed pleased and said I should keep doing whatever I’m doing.

So, the kids and I have all started a new chapter. I’m glad North continues to be active in theater and the GSA and is taking some challenging classes. Somehow junior sounds a lot older than sophomore, doesn’t it? Suddenly we’re in the second half of high school. And Noah has jumped forward, too, launched into an international adventure and his last year of college. I am proud of both of them and I am eager to see how the year unfolds for all of us.