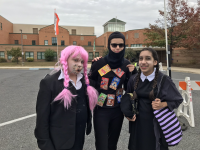 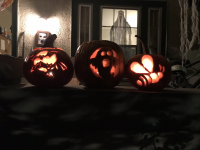 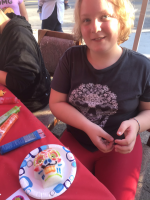 This past week we went to the last two high school open houses. These were for the two schools North was most interested in, for their arts academies. One also houses a visual arts magnet, to which North is applying.

All through this process I’d been wondering, since all the high schools have some kind of arts academy, why North couldn’t just go to our home school, which is closest and very well regarded. But I kind of understand. There was definitely a difference in the way the schools present themselves at the open houses. The last two put a bigger emphasis on the arts. There were more musical, dance, and dramatic performances interspersed between the informational speeches. (Our home school had some but not as many and the school that’s known as the most STEM-focused had none.) The last school, which is North’s first choice, was also the most enthusiastic. The principal kept prompting the audience to shout that it was “the place to be” at various points in her speech. (I later commented to another parent that it wasn’t clear if it was a high school or a cult.)

There was a short break-out session for the Visual Arts Center, at which we got some useful information about the application process—mainly that the online application is due this week but the art itself doesn’t need to be submitted until December—but not much information about the program itself, which was a little frustrating. Anyway, North filled out and submitted their school rankings on Friday, the day after the last open house. Beth and I were considering telling them they had to put our home school second because if you put your home school first or second you’re guaranteed a spot and the worst outcome would be if North ended up at a school that they’re not interested in and that’s far from our house. That could happen if they don’t get into their first or second choice because our home school is the most requested school in the system and if they gave up their spot by ranking it third, there’s almost no chance they’ll go there. But they were willing to risk it, so we let them.

Meanwhile, costume preparations have been less intense with just one kid home (and with it being the one who doesn’t get quite as angsty about what to be at that). North decided to be a doll with its mouth sewn shut this year. They created this effect by covering their mouth with a layer of latex and sewing through that. Beth and North went shopping for clothes and a pink wig at Value Village (a big thrift store up the road from us) and they bought the latex and makeup online.

On Saturday, the day of the Halloween parade, they set off for Zoë’s house and applied the makeup there because North, Zoë, and their mutual friend Norma were going to the parade together. So when Beth and I left the house it felt a bit odd to be setting out for the parade without any kids at all, and with no deliberation about whether the paint on Noah’s costume was dry enough to go in the car or not.

We met North and their friends in the parking lot of a local middle school. Zoë was a cereal killer (dressed all in black, with a balaclava and single-serving size cereal box fronts attached to her torso, and carrying a wooden knife) and Norma was Wednesday Adams. The three of them were all in black and they looked like they belonged together.

People were milling around and admiring each other’s costumes until it was time to line up by age and have the judges come inspect the costumes. There were some political costumes, but probably not as many as there will be next year—one Bernie Sanders, one Elizabeth Warren, and a baby draped in whistles, with a cape that said, “Whistleblower.” There was a mad scientist on stilts, carrying a brain in a jar and a mime wandering through the crowd. Keira, a girl who went to North’s elementary and middle school and who is now in high school, went as a college brochure, for the fictional Takoma University. Keira is a many-time costume contest winner but this year I thought her mom, who has helped with many of these costumes might give her a run for her money in the teen and adult category. She went as Rosie the robot maid from The Jetsons. Before I knew who was inside (the cylindrical cardboard headpiece completely obscured her face) I commented to Beth that no one younger than us would know who she was and sure enough, of the many people I heard compliment the costume, I don’t think one was under fifty.

I sized up the teen and adult group, wondering who North’s competition for Scariest was. I kept coming back to a man wearing an Iron Maiden t-shirt and a rubber mask that looked somewhat like the monster on it. As a family, we do not approve of awarding prizes to people in store-bought costumes and while this costume did involve putting a couple of elements together, the main part of the costume was the mask. However, I know the contest judges do not use the same rubric that the Lovelady-Allens do.

After the judges had seen all the costumes, the parade commenced. The age groups were dismissed one by one. The parade had a new route this year, its third in the many years we’ve been doing it. We’re not crazy about change when it comes to traditions and this route has the decided disadvantage of not passing through any commercial areas where one could get coffee or hot chocolate on a chilly afternoon or gelato on a warm one. But so be it.

The parade ended in the parking lot behind the community center. Kids collected small bags of candy and juice boxes and there was a band playing. I was pleased to hear it was the Grandsons, a local band that often plays at the Halloween parade but last year didn’t. We chatted with a family whose oldest daughter went to preschool with North, talking—what else?—about where the kids want to go to high school.

When it was time to announce the contest results, we moved closer to the stage. It took a while to find a place to stand where we could see the winners, so we missed most of the under-fours, who I’m sure were adorable. When we heard the winner for Most Original in five-to-eight was a dragon Beth and I gave each other skeptical looks. A dragon? For Original? But then we saw the kid and we understood. His costume was made out of cardboard boxes painted black and the jaw was hinged so that he could open and close it from inside by pulling a string. It was a very cool effect. A pair of kids in gray angel costumes with their hair and faces painted gray, who I thought might be weeping angels from Dr. Who, won a prize in nine-to-twelve. I can’t remember if it was Scary or Original.

Finally it was time for teen to adult. Cutest went to Zoë, the cereal killer. Most Original was Rosie the robot and Scariest was…the Iron Maiden monster. We knew North would be disappointed and they were stewing about it a little, though they were gracious to Zoë, who was a little surprised to have won. “I just threw this together,” she said. What made North perk up, more than the hugs we gave them, was a text from Noah who said losing to someone in store-bought mask “doesn’t count as losing.” Sometimes he knows just what to say.

Beth drove the kids back to Zoë’s house where they stayed until that evening. I made a kale, white bean, and porcini soup for dinner and then we carved our pumpkins. Beth did the bats, I did the ghost, and North did the bee. Apparently, the theme was things that fly. Before bedtime, North was wrestling with their Visual Arts Center application, trying to trim it from over five hundred words down to two hundred. (Despite the fact that this kind of thing is what I do for a living, they didn’t want any help.)

On Sunday, after roasting two trays of pumpkin seeds, grocery shopping, and swimming, the three of us went to Cielo Rojo, a Mexican restaurant that was having a Día de los Muertos fundraiser for Moms Demand Action for Gun Sense in America. So we got guacamole, queso fundido, and a quesadilla and ate them on the patio because it was a beautiful afternoon with temperatures in the seventies. You could also decorate a sugar skull, which North did.

And when we got home, North finished editing their Visual Arts Center essay.