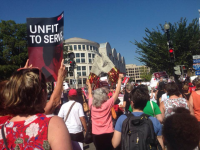 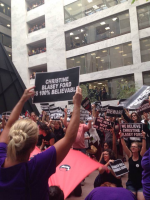 Jesus, where do I start?

I am not a survivor of sexual assault, not really. Just the normal catcalls and unwanted attention in my teens and twenties. Just being groped by a fellow student on a crowded stairwell in my high school and by a stranger on a street corner in college. Just being stopped on the street at night by a man who offered me ten dollars to have sex with him when I was sixteen or seventeen. (At least he didn’t touch me and left when I said no.)  I’ve heard so much worse from so many women I know, including my own sister, these past few weeks. It seems everyone has a story to tell. Every new revelation is depressing and the cumulative effect is staggering. Why is this normal? This should not be normal. But it is.

Okay, I guess I’ll start with the hearings. A week and a half ago, like many of you, I spent much of the morning glued to Dr. Christine Blasey Ford’s brave and moving testimony in the Kavanaugh confirmation hearings. I didn’t mean to watch as long as I did, but if you watched, too, you know how riveting it was. (It was made even more so  by the fact she’s almost exactly my age and so relatable and because I know one of her lawyers who was sitting right next to her. The lawyer’s son went to preschool with Noah.) While I watched, I made a batch of postcards for Phil Bredesen’s Senate campaign in Tennessee.

I was thinking at the time I would have preferred to be writing for a female candidate (on that day especially) but the address-dispensing bot doesn’t always give you a choice. Some days there are addresses for two or three candidate available and some days it’s only one. To make matters worse, I read a profile of Bredesen in the Post the other day and when asked if he would vote for Kavanaugh (in some alternate universe in which the vote didn’t take place until next year) he wouldn’t commit. But I keep telling myself the individual, mostly centrist, candidates are not the main reason I’m volunteering to do this. Flipping the House and maybe even the Senate is the goal. And I did get addresses for a woman (Katie Porter in California) the very next day.

A week after those hearings I met Beth in the lobby of her office a little after noon. There was a CWA contingent marching against Kavanaugh’s confirmation and I was joining it. The march started at the federal courthouse where Kavanaugh currently works and proceeded to the Supreme Court. While we were at the first court house I heard someone say Elizabeth Warren was in the crowd, but I didn’t see her.

I did see a lot of signs. The ACLU was passing out ones that said “Women Must Be Heard” on one side and “Unfit to Serve” on the other. I took one of them. There were a lot that said, “Believe Survivors” and “Kava-Nope.” (Other variations I saw later in the day: “Kava-Naw” and “Kava-No.”) The President of Beth’s union had a hand-lettered one that said, “Were You Drunk When You Ruled Against CWA in Connecticut?” But my favorite was another homemade one that read “I Hear Merrick Garland Is Available.”

Once we got moving, I realized the crowd was bigger than I thought. We filled a few blocks at any rate. It was pretty good turnout for the middle of a weekday. But then again so many people—women and men, too—are just so sad and angry, how could we not take to the streets?

It was an unseasonably hot day for October—it eventually got up the mid-eighties and because we were standing on asphalt a lot of the time, it felt warmer. There weren’t as many people in costume as you often see at these things—a few people in Kavanaugh masks clutching huge beer cans, a woman in a Statue of Liberty crown. My favorite prop was the pair of cut-off khaki pants held up on sticks with shiny flame-colored ribbons attached to the knees. It took me a second or two to get it—pants on fire.

At the Supreme Court, there were many speeches from sexual assault survivors from the states of wavering Senators—Alaska, Maine, and Arizona. While we were there, Heidi Heitkamp’s decision to vote against Kavanaugh was announced to cheers from the crowd. I hadn’t even realized her vote was in play, but apparently it’s hard to be a Democrat in North Dakota. When the speeches were over, we headed over to the atrium of the Hart Senate Office Building. The original plan had been a direct action on the steps of the Capitol, but it was barricaded.

I have to say the atrium was probably a superior place to protest anyway. It’s eight stories tall, with marble walls and the acoustics are great. The chants echoed and swelled and just filled the space. I found myself yelling more loudly and with more emotion than I had in the street. (Beth later said it was “cathartic.”) Plus you could see into some of the glass-walled offices, where supportive senators had hung signs that said things like “We Believe Survivors” and staffers peered out to watch the protesters. Seeing them see us made it all seem very real. Bernie Sanders and Amy Schumer were both there—Schumer got arrested, but I didn’t spot them. I only heard about it later.

We didn’t want to get arrested—though Beth considered it—so we moved up to the second-floor balcony when the Capitol Police cleared the floor. We had a good view of people being arrested from up there. It was all very orderly. The people who wanted to be arrested got into line and every time the police took them away in small groups, the crowds who were standing on the periphery of the atrium or up in the balconies would burst into cheers and chants. “We Will Remember in November” was a popular one. A group of protesters unfurled a banner from the sixth-floor balcony that read, “We Believe All Survivors.”

By this point, I was getting choked up. “I hope she’s watching this,” I said.

One of Beth’s colleagues wanted to know if I meant Susan Collins, but Beth, who knows me better, said, “No, she means Blasey Ford.”

I left before Beth, a little after four, hoping to get home in time to make dinner and supervise homework. However, by the time I got home I was too worn out from the heat and the emotion of the day to do anything more elaborate than heat up frozen burritos and corn. I did read a couple chapters of The Sun Also Rises to Noah, though reading about the exploits of a group of continually drunk and poorly behaved expats was not really high on my hit parade that week.

But back to the Hart Building… before I left I went to the restroom. As we were washing our hands, a woman asked me, “Do you have any hope?”

“I’m not sure,” I answered honestly. Then I thought to clarify whether she meant for the short-term or the long term.

I was not feeling particularly hopeful for the short term, even right after watching that stirring demonstration, but I have a little more hope for the long term… at least sometimes. We may be on the cusp of an important change in how we as a culture think about sexual violence. It’s important to remember more people believe Ford than Kavanaugh and we didn’t want Kavanaugh thrust upon us any more than she did wanted him thrust upon her thirty-six years ago. But with the current composition of the Senate, it just didn’t matter.

Later that night, at home, I told Beth that “The people united, will never be defeated” has to be one of my least favorite things to chant at rallies because it’s so patently untrue. We are defeated again and again and again. My favorite chant of the Trump era is the call and response: “Tell me what democracy looks like./This is what democracy looks like.” It’s factual but spirited. Democracy is loud and messy and a work in progress. It’s never over. No defeat is the end of the story.

That’s what I’m telling myself anyway, and I wrote another batch of postcards for two female candidates in Georgia yesterday.