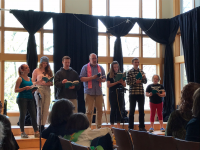 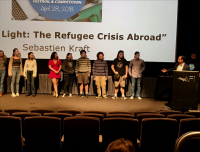 Whan that Aprille with his shoures soote,
The droghte of March hath perced to the roote,
And bathed every veyne in swich licóur
Of which vertú engendred is the flour…

Oh, let’s just do this in modern English, shall we?

The Canterbury Tales, by Geoffrey Chaucer, adapted by Lindsay Price

April may have been when good folks went to Canterbury, but for us it’s when it starts to seem there’s another artistic event every day. Here’s what we did over the past week: North sang with the church youth choir during the Earth Day service, Noah’s band competed in the state band festival, North and I read poems at a poetry reading at the public library, I attended my book club, North acted in two performances of the school play, and three short films Noah helped make were screened at a film festival for high school and middle school filmmakers at the American Film Institute.

It was a very musical service. The two choirs performed “This Pretty Planet” together as the gathering music at the beginning of the service. The younger kids were in white tops, dark pants or skirts and kerchiefs made of green felt to which they’d attached cutouts of lady bugs, flowers, etc. The older kids were in street clothes. They sang the song in a round. It goes like this:

This pretty planet spinning through space,
Your garden, your harbor,
Your holy place,
Golden sun going down,
Gentle blue giant spin us around.
All through the night, safe ’til the morning light.

During the offertory the children’s choir sang two more songs alone and then for the commencement music the youth choir sang another song “The Oneness of Everything.” It’s a long song, but here’s how it starts:

Far beyond the grasp of hands, or light to meet the eye,
Past the reaches of the mind
There find the key to nature’s harmony
In an architecture so entwined.
Like the birds, whose patterns grace the sky
And carry all who join in love, expanding,
The message of peace will rise in flight
Taking the weight of the world upon its wings,
With the oneness of everything.

Considering they practiced just once (right before the service) they sounded pretty good.

And speaking of music, one of the several hymns the congregation sang together, “Mother Earth, Beloved Garden,” was written by someone I knew in college. (We were in a housing and dining co-op together and I had a class with her girlfriend.) I wouldn’t have even noticed if Beth hadn’t pointed to her name in the hymnal, but I was pleased to see it.

At festival earlier this spring, one of the three bands Noah played in got straight superiors so they advanced to the state level, which was held at Towson University on Tuesday. Noah managed to leave the house in his band clothes and they got top marks again for their performance pieces and their sight reading. They played a Sousa march, a piece by Copland, and song called “Children’s March.” Noah played crash cymbals, suspended cymbals, triangle, and bells. He seemed pleased with their scores in a muted, Noah sort of way.

That evening, North and I read at Favorite Poem night at the public library. It’s the third year in a row I’ve done this—and North’s first year—but I considered doing it for years before I did. The problem was I took the name a little too literally and it was hard to commit to any one poem as being my favorite. Finally, two years ago I decided one of my favorites would be good enough and read Emily Dickinson’s “One Need Not Be a Chamber to Be Haunted.” And then last year I had just read a Pablo Neruda poem, “The Wide Ocean,” at my stepfather’s memorial service, so I read that one again at the library. As I was trying to decide what to read this year, I thought I could do the two poems my father chose to have read at his memorial service eight years ago, as those are meaningful to me, if not exactly favorites. So, I read an excerpt from Alfred, Lord Tennyson’s “Ulysses,” and Raymond Carver’s “Late Fragment.”

North read “Pronoun,” which is the first poem of in Freakboy, a novel-in-verse about three characters with different gender identities and expressions. There were a couple other kids at the reading, including one North knew from acting class. He did a very dramatic recitation of an e.e. cummings poem he had by heart. I think he stole the show, but another memorable moment occurred when the last reader was reading “Casey at the Bat” off his phone, not realizing it was truncated. Left without the last couple stanzas (right after the second strike), he looked at the crowd and said, “Well, you know how it ends, right?” and a good chunk of the audience chanted back, “There is no joy in Mudville—Mighty Casey has struck out!” much to North’s surprise. Later I explained, “Well, it’s a famous poem,” and they wanted to know, “Is it an old people poem?”

Wednesday my book club had its fourth and final meeting on Kristin Lavransdatter, a three-volume, 1125-page novel set in fourteenth-century Norway following the life of a woman from early childhood to death. I struggled to finish the book by the last meeting but I managed it, just barely, because I’d invested so much time in it over the past couple months I couldn’t bear for there to be any spoilers. And I won’t give you any, in case you intend to read it, which you should if you like historical novels with sweeping, multigenerational plots and intimate psychological portraits.

The spring play at North’s school was The Canterbury Tales and it opened Wednesday and closed Thursday. The kids have been in rehearsal for months, having auditioned and received their scripts shortly before winter break. For the last several weeks, North’s been in rehearsals for two plays at once, as Romeo and Julian rehearsals at Highwood Theater overlapped with this play. It worked because all the school play rehearsals were after school and all the Highwood ones were either in the evening or on weekends, but it still made for some busy days. One recent Saturday North had a costume fitting for one play in the morning and a rehearsal for the other in the afternoon.

Beth got involved with the play, too, helping sew costumes on two Saturdays and designing the programs. The director had the idea to have Beth re-write all the kids’ bios using gender-neutral pronouns as a show of support for North. It was well-intentioned, but North, Beth, and I all thought using pronouns other than what the kids preferred wasn’t quite the right thing to do. After all North doesn’t like it when that happens to them—so I suggested writing the bios in the first person with no gendered pronouns at all and that’s what Beth did.

Beth and I attended the play on Thursday. In case you’re wondering what a middle school production of The Canterbury Tales would be like, the answer is: in modern English, mostly in prose, cut down to seven tales, and only mildly bawdy (although bawdy enough to surprise some parents).

The play was performed in the band room, which is an amphitheater-style room so the actors were in the front and the audience was on folding chairs around and above them. It was very well done: the costumes looked great, almost all the kids projected, and even though a lot of them had never acted before, there wasn’t much stumbling over lines and the actors portrayed their characters convincingly and with humor. North’s friend Zoë was one of the novices, and she did a great job playing the knight in the Wife of Bath’s tale. She seems to be a natural.

North played the Pardoner, one of the pilgrims, so they were on stage in the opening scene, in all the scenes between the tales and they narrated their own tale. It was a good one, featuring the black-cloaked figure of Death, who touched people on the shoulders causing them to act in ways that set their own deaths into motion and then stalked away cackling. In the intercalary scenes North’s character was a comic figure, with a lot of good one-liners. If you’re looking for them in the picture, they’re second from the left—in between the church choir performance and the play they dyed their hair purple. Also, the crutch isn’t a prop– they fell over a chair and twisted their ankle a couple days before the first performance.

Saturday morning we went to the American Film Institute to see the Montgomery County Youth Media Festival. Noah and his collaborators submitted three short films and they were all accepted, which is impressive considering the festival as a whole had about a one-third acceptance rate. All Noah’s films were made with other members of the production team at Blair Network Communications, the television station at Noah’s school.

Of Noah’s three films, the two in the documentary category were short bits profiling school events, one held by of the Free Minds Book club, which was facilitating correspondence between incarcerated kids and Blair students, and another by the Japanese club, which was teaching students to make rice balls and raising money for world hunger. The film in the narrative category was the longest one (and Noah’s favorite). It was a PSA about not being late to class. It featured the school mascot, the Blazer, and his fictional nemesis (invented for this film), the Reverse Blazer, who attempts to make a kid late to class by plucking him out of the hall and causing him to teleport to the athletic field. The Blazer then appears and pursues the Reverse Blazer, but the Reverse Blazer escapes, so as the Blazer explains everyone must be diligent about being on time for class because the Reverse Blazer is still out there. This film got a lot of laughs from the audience, which is also what happened when it aired on BNC.

Noah’s school dominated the documentary category with nine of the thirteen finalists; this isn’t that surprising because Blair houses the Communications Arts Program and filmmaking is central to the curriculum. The narrative film category was more balanced, with The Blazer being the only entry from Blair. I also noticed about a third of the middle school films were from Noah’s middle school, which also has a communications magnet.

The winner in the documentary category was a film about refugees in Paris, made by one of Noah’s classmates. A horror film won the narrative category. My interpretation of it was that it was about hallucinations brought on by sleep deprivation in three kids in a college (or maybe boarding school) dorm. There was a lot of impressive film making but I have to say Noah’s peers seem to be a morose bunch (either that or the judges who picked the finalists are). It seemed every other film was about death or mental illness. At first I was surprised, not that kids would make films on these topics but that so many of them would and then I remembered being a teenager and I wasn’t so surprised any more.

I would have liked to stay for the whole festival but it was five hours and we did have other things to do that day so we left during the break between high school and middle school films and went out to lunch at Noodles and Company and then got bubble tea (for North) and ice cream for the rest of us before heading home.

It’s been a busy but fun week with our young artists. And we have a bit of a breather before our next two performances, which will be Noah’s band concert on Thursday and Romeo and Julian in mid-May.