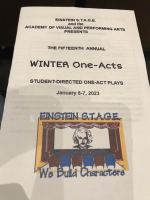 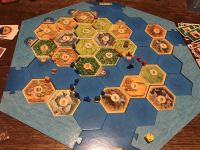 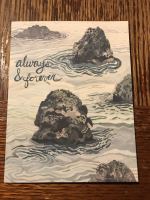 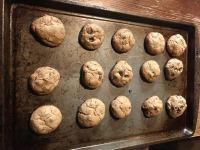 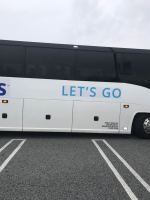 Two Saturdays ago, we went to the Winter One Acts at North’s school to see some of their friends, including Ranvita, act in them. In the spirit of concise storytelling, I’m going to present what we’ve been up to over the past few weeks in bite-sized pieces, three paragraphs max per topic. Can I be that brief? We’ll see.

It felt novel for the winter one acts to be put on in winter, as last year a covid surge and subsequent scheduling problems delayed them until May and the year before, of course, they didn’t happen at all, as school was closed for most of the year and there were no extracurriculars even when it opened briefly in the spring.

It was our first outing of the year as we didn’t do much for New Year’s Eve or New Year’s Day. We got an invitation to go to a small New Year’s Eve party our neighbors were holding, but we didn’t feel up for it. We didn’t do our usual New Year’s Day hike or cheese board either. We did all watch Carol because North found it on a list of New Year’s-themed movies. Afterward we all agreed it was a good film (Beth and I had already seen it) but the connection to New Year’s was tenuous at best. Afterward the kids stayed up to usher in the new year with salty snacks, sparkling juice, and tv, as is their sibling-bonding tradition.

Back to the plays…there were three one acts, followed by an improv presentation. Ranvita had a small part in the first one act, which was also the best one. It involved John Rockefeller, Andrew Carnegie, and Cornelius Vanderbilt playing Monopoly in the afterlife and it was very funny. Ranvita also had several parts in the improv pieces. These weren’t being improvised in the moment but were workshopped as improv and then turned into very short plays. The schtick was the actors were trying to get through thirty of them in less than an hour (and they succeeded). It was fun to watch and North seemed to enjoy seeing friends, especially Ranvita, and they gave her a bouquet. They haven’t been able to see much of each other the past few months, but they did have a brunch date recently.

The next night, Beth, Noah, and I played Settlers of Catan with the Seafarers’ extension kit Noah got for Christmas. As you might guess from the game, there are ships involved, and you can use them to settle smaller islands off the coast of Catan. It took us a little while to figure out how strategy differs in this version, but we were getting it by the end, I think. Noah won the game. On other nights during his break, we played Sleeping Queens, Jeopardy, and Scattergories, some of these more than once.

We have family therapy every Monday and Tuesday these days. Mondays it’s a virtual session in the late afternoon after North has gotten home from their day program. Noah joined us for a couple of these sessions. On Tuesdays it’s hybrid and it’s not just us, but all the families of all the kids in North’s program all together, which I have to say is kind of an odd format. All the kids are there in person, as it’s the end of their day. Some parents come in person, and some attend virtually. Often, Beth and I are the only parents in the room.

Beth has been working in a room she’s renting in a co-working space in a big office building near North’s facility, so she doesn’t have to make the hour and a half round-trip drive twice every day. Since she’s right next door, she always goes to multi-family group in person. I usually do, too, since the one time I tried attending virtually I couldn’t hear well and the person I could hear least well was North. Getting to Columbia by myself wouldn’t be easy, so attending group in person means I spend the day in Beth’s office on Tuesdays. There are four desks, so I can set up my laptop on one of them and I have new environs for my daily walk, so it’s not bad.

Beth and I had an anniversary a week ago today. It’s now been thirty-one years since our commitment ceremony and ten since our legal wedding (they were on the same date). We had breakfast for dinner, and I made muffins using the recipe for the spice cake that was our wedding cake (both times). I’ve made it almost every anniversary since 1992, usually with a lemon glaze, though the original wedding cake had white frosting with purple frosting violets on it. North is quite attached to the lemon glaze and was kind of outraged the year I made an orange glaze instead. Last year was my first year with diabetes and I left the glaze off entirely, but I’ve gotten a little more relaxed and when I was wavering about the glaze, North advocated for it and I ended up making it.

We exchanged presents after dinner. One of the advantages of having an anniversary two and a half weeks after Christmas is that you can just check your wife’s Christmas list and see what she didn’t get. I got Beth a kit of salad dressing spice blends and she got me Hamnet, which were unbought items from our lists. But I also got her two fancy dark chocolate bars, and she got me a roll of postcard stamps because I can always use them for get-out-the-vote campaigns and postage is going up later this month.

Her card said “Always and Forever” on the front, which is exactly what I wrote on the inside of mine. I’m taking that as a sign that we’re going the distance. ‘Til death do us part.

I’d been in the mood to make cookies for a while, and I thought I should do it before Noah left so I could send some of them with him. The day I ended up making them was the Sunday of MLK weekend, which was also the thirteenth anniversary of my father’s death. It seemed kind of appropriate because he loved sweets of all sorts and Snickers bars especially, so something with chocolate and peanuts seemed a fitting tribute. North’s been baking, too. Their last creation was a very tasty carrot cake with a chocolate ganache. We’re still eating it.

The end of Noah’s time at home is often a rush to finish television seasons and books and this one was no different. In four weeks, he and I started and finished the current seasons of What We Do in the Shadows and The Handmaid’s Tale. I didn’t think we were going to manage that last one, but he ended up staying home a few days longer than he thought he would, and the extra days included a long weekend, so we watched the last four episodes in two days. That season was something else, wasn’t it?

With Beth, we also made it to the end of season 5 of Buffy the Vampire Slayer (bingeing the last three episodes in the middle of the day on MLK day while North was at their program). Noah is puzzled at how the series will continue for two more seasons, as the title character dies in the season finale, but we’re not telling. With everyone, we got to the midpoint of season 7 of Blackish. We’ve reached the covid era episodes and while the first couple about it were excellent and very evocative, I was disappointed that it basically fell out of the plot after that, as if it barely happened and didn’t deeply alter our lives for years.

As for books, over the course of his break, Noah and I also read What Strange Paradise, The Nova Incident, and Wyrd Sisters. We often save a Terry Pratchett novel for last because they are short and easy to fit into a little scrap of time if we happen to have one left. We finished it on Monday, the last full day before he left. (Meanwhile two days earlier, North and I finished The Inferno, which we’d been reading since early December.)

Once we’d finished Wyrd Sisters, around 3:45 on Monday, I had a bit of an empty feeling, because there was nothing else to finish, after spending much of the last three days in a sprint to read and watch all the things. But there was plenty to do: we had a family therapy session (Noah skipped this one to pack) and I made dinner, a vegetable-bean-noodle soup, not unlike what I made for his first night home, and North made the carrot cake, and I packed Noah some snacks for the bus (pecans, dried cranberries, and a half-dozen of the cookies), and that night we all played an online Jeopardy game. Noah made a valiant effort to fill up on homemade treats while he could, eating two slices of cake and a cookie.

Yesterday morning, we all got into the car at 7:55 a.m. and drove to a mall parking lot just outside Baltimore, where at 9:15, we put him on a bus that said “Let’s Go” on the side. And heeding its suggestion, we all did, to college, to treatment, and to a little office in a co-working suite.