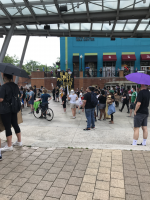 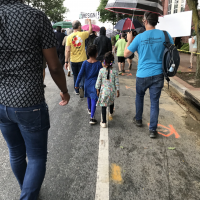 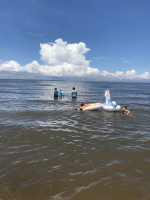 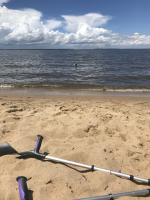 Well, I ended my last post saying I imagined the summer would hold more protests and drone-flying excursions and that seems to be how it’s going. Last Friday we went to a slightly bigger Black Lives Matter protest in Silver Spring and then Sunday we drove out to the Chesapeake Bay to swim and fly the drone.

Earlier that week North had an in-person appointment at the pain clinic, as a follow-up from the telemedicine appointment. The doctor ordered an MRI, to check for any issues with their spine as a precaution before they start another round of physical and possibly aqua therapy. It was the aqua therapy that really seemed to turn things around last time, so we’re hoping the pool at the rehabilitation hospital has re-opened or will soon. Anyway, the MRI and their physical therapy intake appointment are both next Monday.

We didn’t have much information about the protest before we went. I’d seen a notice on Facebook a while back and I’d picked it because I thought at a kneeling protest it might be easy to keep your distance from people. You could select a spot and stay there and everyone else would stay in their spots. I also like the idea of a reflective, silent tribute. But then a day before the protest I couldn’t find any information about an action going on at the time, place, and date I remembered (5 p.m. Juneteenth, Silver Spring Civic Building plaza). There was one there at 3 p.m. on that day and one at 5 p.m. the next day. Living where we do, you really don’t have to look too hard to find a protest. But I wasn’t sure if I’d misremembered the time or the date or if the kneeling protest had been cancelled because neither description I found said anything about that. Beth and I decided on the Friday afternoon one because it seemed like it would be less crowded than the Saturday afternoon one. We invited the kids and Noah said yes, while North declined, possibly because we were pretty short on details and they wanted to know what they were getting themselves into.

When we arrived it was raining gently. There was a crowd, but the plaza wasn’t packed and virtually everyone was wearing a mask. The crowd was mostly teens and adults, but some people had brought younger kids. We tried to keep to the edges, which meant when the speeches started, about 3:20, we couldn’t hear much. The march organizers were young, probably high school age, and there were a half dozen of them standing in a line where the skating rink is in the winter, near a big Black Lives Matter banner, handing the microphone back and forth. There’s really nothing like young activists to make you feel hopeful for the future, even when you can’t actually hear what they’re saying.

Eventually people starting moving and it became clear there was going to be a march. For about twenty minutes we filed through the streets of downtown Silver Spring, chanting the usual chants. Noah commented that he’s always thought “No justice, no peace!” is an odd thing to chant at a peaceful march. It was harder to keep our distance here, but at least we were passing people and they were passing us, so we weren’t in close contact with the same people for long.

When we returned to the plaza it was announced everyone should sit or kneel for nine minutes, the length of time the police officer who murdered George Floyd knelt on his neck. So we had shown up at the right protest, more or less by accident. It was what I wanted but I also had a little trepidation. I’m fifty-three years old, heavyset, and I injured my left knee badly several years ago and it has never been right since then. But just in the past few months it’s been bothering me noticeably less. I have no idea why. I suggested to Beth we move back to the benches because wood isn’t quite as hard as brick. I got up on the bench and tried kneeling. It wasn’t what you’d call comfortable, and it got worse with time, but it was doable. It was conducive to reflection as well.

When the nine minutes was over, the protesters began drifting out of the plaza. We went to Cold Stone, thinking it might be crowded but we were the only ones there. (Maybe the other rain-soaked protesters wanted some less chilly snack.) We took our ice cream back to the parking garage and ate it in the car.

Two days later, all four of us took a day trip to the Chesapeake Bay. It was North’s first time on a drone-flying expedition, but this one held the promise of swimming, Taco Bell, and Dairy Queen, and this combination proved enticing. The park was just past the Bay Bridge. With no traffic, this would be about an hour from our house. It was a summer weekend, though, so we weren’t expecting no traffic. And as it turned out, there was an accident on the bridge so it was actually two hours before we got to the park.

It was a short hike through marshland and woods to get to the beach. The ground was soft and it was hard going for North in places, but we got to the water. The beach was narrow but long, so people were able to stretch out along it pretty well. We were there around two hours and I didn’t see a single person wearing a mask, though Beth said she saw a few. North and I were in the water most of the time we were there and Beth and Noah joined us at the beginning. Then the two of them got out of the water and he took some footage with the drone on the beach then they took a walk toward the bridge. They found a little creek running into the Bay and he shot some footage. Here’s a compilation he made.

When they came back, I’d just gotten out of the water and we watched North. They’re always in their element in the water and it was good to see them so happy and active.

“We have to get them to the beach this summer,” I commented to Beth.

By this time it was mid-afternoon and we hadn’t had lunch yet, so we left the bay and got drive-through Taco Bell and Dairy Queen and ate it at the tables outside the Dairy Queen, which we had to ourselves. (We reminisced about Noah’s twelfth birthday and how we had cake and ice cream at those very tables while en route to Rehoboth for the weekend and how hard it was to keep the candles lit so he could blow them out.)

Noah finally got time slot to pick up his things from his dorm room, where his camera and most of his summer clothes have been awaiting his return since early March. It’s a few weeks from now. We’re going to make a long weekend out of it, staying a couple days in Ithaca to splash in some of the abundant waterfalls and eat take-out from some of the many excellent restaurants in that foodie town.

It will be the first time we’ve been on an overnight family trip since we went to Berkeley Springs in February, but we’ll be hitting the road again less than a week later because after going back and forth for months about whether to go to Rehoboth this summer, we finally decided we would, but not as the big extended family gathering it usually is. We’re thinking of it as moving our bubble to the beach—a mere block from the beach as it turns out. We decided to prioritize proximity to the ocean, so North can spend as much time in the water as they like. We’re not sure what else we’ll do and what we won’t while we’re there. We’ll have to assess how crowded our other usual haunts are and what conditions in Delaware are like in mid-July. But North said if they could go to the beach and get takeout from Grandpa Mac’s and Grotto that would be enough for them, so I think we can swing that.