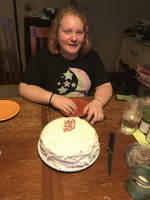 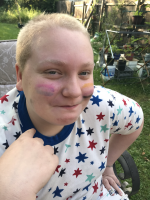 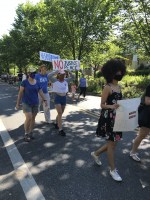 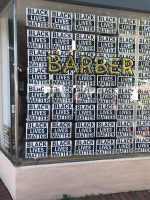 From “School’s Out,” by Alice Cooper

North was promoted from middle school, virtually, on Friday evening, so I guess it’s summer break now. It may be hard to tell the difference, as North’s schoolwork had been pretty minimal since it went online, but it’s a milestone nonetheless. They finished their last assignment, a short essay on the role of slavery in the Civil War, on Thursday so they could relax and celebrate all day Friday, or “North Day,” as Beth dubbed it.

We also had a telemedicine appointment Thursday at the pain clinic, with the doctor who helped set up North’s physical and aqua therapy for their last bout of chronic pain, the one that lasted from February of seventh grade to November of eighth grade. Because North mentioned some intermittent  muscle weakness and that’s a new symptom, the doctor wants to see them in person, so we made an appointment for Monday. (I can’t go because only one parent is allowed to accompany kids to the National Children’s Medical Center right now, and since Beth drives, she’s the obvious choice. I’ve been avoiding both public transportation and ride-sharing services since March, which has really curtailed my transportation options.) As much as we all wish we weren’t in this situation, it’s a good thing to be on a path to a treatment plan.

Thursday is North’s cooking night and it was also their turn to choose our weekly family activity evening, so they made cucumber-tofu sushi and then organized a scavenger hunt. Because it’s Pride month, we were searching for little colored pieces of paper in arc shapes. (They printed a rainbow and then cut it into bands and then cut each band into several short strips.) They hid them around the house and yard while Beth was sequestered in our room on a work call and Noah and I went for a short walk so we wouldn’t see them hiding the papers. When we got back, they directed the hunt from the living room couch, where they issued occasional clues. The hunt was supposed to end when someone found strips with all six colors, but time ran out and as I had five at the end, I was declared the winner.

On Friday, Beth took the day off and wore her “Let Summer Begin” t-shirt. At lunchtime we got takeout from an Italian deli and Starbucks and we all had a picnic at Wheaton Regional Park. We also let North choose the venue for takeout pizza that night (they chose Roscoe’s) and Beth made a cake—chocolate with a raspberry filling between the layers and white chocolate frosting. We stuck the numeral nine candle in it because they are now a ninth grader. When we lit the candle, I put on Elizabeth Cotten’s “Graduation March,” but because it wasn’t the more familiar “Pomp and Circumstance,” and because there was cake, the kids decided we needed to sing “Happy Promotion” to the tune of “Happy Birthday” so we did that.

When we presented North with a promotion card and gift—an iPad, with a keyboard and pencil— they were really surprised because they weren’t expecting anything. I have to admit, I felt some retrospective guilt about the fact that we didn’t get Noah anything for eighth grade promotion—and he worked so hard in middle school!—but it’s kind of late for that now. And he did get a class party on a riverboat and an in-person promotion ceremony, while North’s class trip to Six Flags was cancelled, so maybe this evens things out.

The prerecorded promotion video was supposed to be available at 6:30, but there were technical difficulties and it was 8:30 before we were able to view it. After we’d been waiting a while we started to watch The Way, Way Back, which Beth or North found in a list of coming-of-age films. (They were both looking for one because North thought it was an appropriate genre for the evening.) When we finally got the message that the promotion videos had gone live, we paused the movie to finish the next night.

The virtual promotion was a lot like an in-person promotion. There was music from the school orchestra, speeches from the principal, faculty, and students, and awards for various virtues (Caring, Thinker, etc.)  Then the names of the roughly four hundred eighth graders scrolled down the screen. Finally, there was a slideshow of photos students and parents submitted. I sent in photos of North at Outdoor Ed in the fall of sixth grade, and in chorus concerts, plays, and coffeehouses. The teacher who organized it (North’s Spanish teacher) picked four of them and Zoë sent in a few pictures of North, too, so they were well represented. I hadn’t told North I sent in pictures, so that was a surprise, too, and they seemed pleased. I think North Day was a success.

The only thing on the agenda North didn’t get a chance to do on Friday was get their head shaved, which we’d promised them they could do once the school year was over. They’ve been wanting to do it for months, but first I was making them wait until after my sister’s wedding in July and then when the wedding was postponed until next summer I proposed after promotion as a good time for it, so they could mark the end of middle school. This was back in May and they wanted to do it right away and grumbled a bit, but Beth advised them to “take the win,” and they must have seen the wisdom in that because they stopped complaining. But by the time we’d watched the promotion on Friday night, it was dark out and all quarantine hair cutting has been taking place in the back yard, so they had to wait another day, but on Saturday morning Beth shaved their head, as promised.

Today North and Zoë got together to wade in the creek and they painted their faces to mark the fact that today was supposed to be D.C. Pride, before it was cancelled. I’m glad North is able to socialize in person with Zoë now and that it’s motivating them to move a bit more, since they have to meet outside.

North will be free for a while. Starting in July, they’re going to take an online summer school class in computer science to get their tech requirement out of the way and to give them a little something to do, as other than a two-week, half-day socially distanced drama camp, also in July, they don’t have many plans. It’s unclear if  they will be going back to school in person in August. We got a message from the school district just today informing us that no decision has been made and if we’ve heard anything one way or the other, it’s just a rumor.

As for Noah, we got his academic calendar a few weeks ago. Because his college is starting in early October and ending not much later than usual, it’s compressed—with no fall break and shortened Thanksgiving, winter, and spring breaks. Students are encouraged not to go home during either the Thanksgiving or spring breaks, but that’s not mandatory. Of course, this is all assuming these plans go as currently scheduled. The School of Health is openly lobbying for a different plan for fall semester—a hybrid one in which the students start online classes in August, switch to in-person classes for October and November and then finish up at home in December. This disturbs Noah because he’s applying for summer jobs and internships and he’d like to know the exact length of his break.

Speaking of Noah, Beth and I continue to go on weekend outings with him to fly his drone. (It was probably on one of these rambles that Beth got bitten by a tick. She was diagnosed with Lyme Disease on Monday. It was her second go-around with it, so she was able to recognize the symptoms and get on medication quickly.) A week ago we went to Quiet Waters Park in Anne Arundel County, which is on the South River. The name is something of a misnomer, because there are a lot of powerboats in the river and there’s a dedicated dog beach, which is a great idea for dogs and their people, but it’s not exactly quiet.  We did find a nice open field in front of a stage and a little botanical garden, though, and these were good places for flying. Then yesterday we went to Rockburn Branch Park, in Howard County, which was notable for the fact almost no one was wearing a mask, so we gave everyone a wide berth. There are some historic houses and barns in the park and Noah flew around and over them, then we walked along some trails, and by the numerous sports facilities (baseball diamonds, soccer fields, tennis and basketball courts, and a mountain biking skills course).

We also went to a youth-organized, socially distanced march in Takoma Park a week and a day ago. I’ve been skittish about protesting, because of COVID, but this seemed like a good starter march because the crowds would not be as big as downtown and it was going to be mostly kids and their families so I thought there would be a focus on safety. The route was pretty short and close to home, so we thought North could manage at least part of it and it would be pretty easy to get them home when they were done. I also like to support youth activism in these days when we need it more than ever.

There was a good turnout (including several families we know), nearly everyone was masked (with the exception of the guy standing on the corner yelling about how Jesus was the solution) and for the most part, folks kept their distance. “Black Lives Matter” was the most popular sign, but we also saw “Stop Killing Black People,” “No Justice, No Peace,” and “Say Their Names.” I saw the younger sister of one of North’s friends carrying one that said, “My Friends’ Lives Matter.” We carried the sign North made that says “All Lives Can’t Matter Until Black Lives Do,” taking turns with it.

North walked several blocks and then wanted to sit on the curb, so I stayed with them while Beth and Noah went on. After they decided they were done and not just resting, I went to try to catch up with Beth and Noah with the plan we’d all meet back where North was waiting for us. It took a while to find each other, as the march went off-route at the end, and I went with it while Noah and Beth stayed at the official end point. But eventually we reunited. I went to the farmers’ market to get strawberries and Beth drove the kids home. The march went well enough that we feel ready to tackle another protest next weekend in Silver Spring. This one is a kneeling protest, so I’m hoping people will stake out their spots and stay put, minimizing close contact, but we’ll see.

I imagine there will be more protests this summer and more drone-flying expeditions and I hope, more physical activity for North.