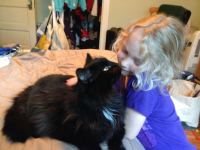 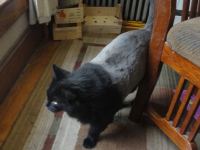 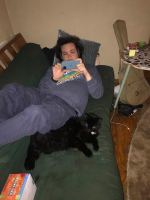 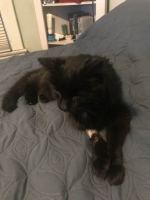 On Wednesday morning I was leaving for a walk, and I texted Beth: “Xander came out with me and seems happy in the sun so I’m not putting him back inside. Could you check on him in a half hour or so? He’s currently in the front yard sidewalk.”

We’d been having a warm, sunny week after a long stretch of rain earlier in the month and I was thinking since it might be too chilly for sunbathing soon, I wanted him to enjoy this opportunity. I’m glad I left him out there because as it turned out, it would be his last time soaking up the sun.

That afternoon I was at my desk working and Beth was on a call when I heard him make loud and distressed noise. I went to see what was wrong and he was vomiting in the hall, which was nothing unusual. But when he was done, his breathing was labored. We’d noticed he’d been breathing more heavily recently, but this was different. Beth called our regular vet practice to see if they could see him that day and they said no, so we called the animal hospital and they said to bring him.

We drove to the hospital and sat in the waiting room for a while he was examined. A vet took us into an office to talk. She said he had a mass in his throat, probably cancer, that was making it hard for him to breathe. She speculated that when he vomited, it caused it to shift into a more obstructive position. We opted against surgery because of his age (nineteen and a half) and frailty. Xander used to be a very big cat, big in all the ways possible for a cat to be—big boned, muscular, plump, and fluffy. He was once capable of staring down small dogs. But he was down to less than half his peak weight and he’d lost three pounds in the past year alone.

The vet wanted to keep him on oxygen overnight and see if steroids would reduce inflammation enough so that he could breathe unassisted. She asked if we’d like to give a DNR order for him, which was startling, but we said yes. I couldn’t imagine someone doing CPR on his fragile body. I also learned in this visit that CPR rarely works on cats anyway.

By Thursday morning the steroids had worked well enough that he was breathing better, enough to come home for however much time he had left. He spent most of the day resting more or less comfortably, though we did notice he didn’t seem to want to put his head down and he’d doze half lying down, half sitting up. We suspected he couldn’t breathe well enough when his head was down. He drank and peed in the litterbox, but he didn’t eat all day, not even the cat treats he loved, and he hadn’t eaten for most of the day before either. We all spent a lot of time petting him and telling him what a good cat he was.

We let him sleep in our bed that night, between us. It was kind of like co-sleeping with a toddler because he couldn’t get comfortable and was quite restless. He was also behaving strangely. He kept going into the bathroom, hopping up a stool, and putting his paws in the toilet, which he’d never done before. If he was thirsty, his water dish in the kitchen was more accessible than that, but I wondered if he was getting confused and had forgotten where it was.

On Friday morning, we decided it was time. The vet from the animal hospital had referred us to a company that will come to your house and euthanize your pet. A vet came soon after we called. We all sat on the living room couch with Xander between me and North. We’d given North the choice to say their goodbyes and leave the room or stay and they chose to stay.

When Xander’s brother Matthew was paralyzed by advanced heart disease three months into the pandemic, he was euthanized in the parking garage of the animal hospital and only one of us was allowed to be with him. This was much nicer and more peaceful. We were all petting Xander and talking to him, and he wasn’t scared. The vet was gentle and respectful. It’s some small comfort that his end was quick enough that he didn’t suffer much but not so sudden we didn’t get a chance to say a proper goodbye.

On Saturday a bouquet of roses and other flowers arrived. It was from some of Beth’s colleagues, who had often seen Xander in the background of Beth’s Zoom calls over the past two and a half years. He was a friendly cat who charmed anyone he encountered—North’s friends all loved him—and this was proof his charm extended to online appearances.

Xander was a beautiful, good-natured cat who lived a long, happy life. In his later years, he went partially deaf and, in his determination to be heard, he just meowed louder and louder. When I posted an album of pictures of him on Facebook, mostly of him snuggling with various members of the family or sitting on diverse perches (a pile of clean, folded towels, my open laptop, an air conditioner), one of my friends commented that it looked like he’d done “all the very best cat things.” He really did. We all miss him terribly.

p.s. If you weren’t reading this blog in 2013, I recommend this post about the time Xander went missing for several days and where we found him. There’s a good twist at the end.