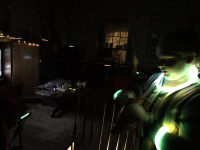 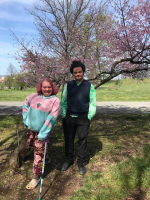 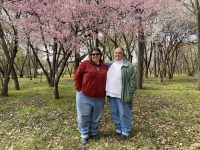 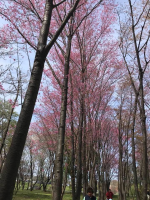 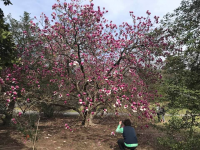 I was listening to Taylor Swift’s Red yesterday and the line “Everything has changed” from the song of the same name struck me hard. It really has, hasn’t it? Every passing week seems so distant from the last one. I wonder how long it will be like that.

So, the first day with everyone home was Monday, six days ago. Here’s a tally I put on Facebook at the end of the day:

2 out of 2 people with jobs worked
0 out of 1 person with schoolwork did any (due to technical difficulties, now solved)
1 out of 1 person who plays a musical instrument practiced
3 out of 4 people spent some time outside
No one yelled at any one else
No one cried (as far as Steph knows)

Let’s take these one by one:

2 out of 2 people with jobs worked

Beth and I both worked from Monday to Friday (and she worked over the weekend, too). On Monday, she had a workstation on the dining room table, but by Tuesday she’d moved into our bedroom, as my desk is in the living room and there are no doors between those two rooms. Between my liking (almost needing) to play music while I work and her not being able to concentrate with it on and the fact that she’s on the phone a lot, it’s better for both of us to be at opposite ends of the house.

The new arrangement required moving a fair amount of clutter out of the bedroom and installing a new desk in its place. I’m hoping there’s a long-term improvement in the appearance of the room once we no longer need the desk, which is kind of wedged between the bed and a bookcase. If so, it will be thanks to Beth, who did almost all of the reorganization work.

For me, working from home with everyone else here too has been harder than it seems like it should. After all, I have no little kids. Everyone is capable of entertaining themselves and the kids are pitching in with the extra housework. They do yardwork, fold laundry, vacuum, clean the bathroom and kitchen, and cook, and Noah cleaned the bottom third of the fridge the other day. (God, the dishes, though! There are so many dishes! Sometimes it seems as if I’m doing them all day long. Maybe that’s why it’s harder to get work done.)  And I’m used to having the place to myself during work hours, so it just seems as if my concentration is always being broken. Plus, I’m frequently interrupting myself to check on North and make sure they’re doing something productive and not stuck to screens all day.

0 out of 1 person with schoolwork did any (due to technical difficulties, now solved)

Speaking of North, they’ve been working on the review assignments they have for school, but there have been some ongoing technical blips that make some of the work hard (or maybe impossible) to do. It’s understandable. The teachers had to throw it all together at the absolute last minute and it shows. This should in no way be taken as a criticism of the teachers, who did their best under trying circumstances. Meanwhile, the school system sent out a message today saying it was unlikely that students would be returning to school a week from now– no surprise there– and that a more formal system of online learning will take effect then. I’ll welcome that, as North could use the structure.

Meanwhile, Ithaca closed for the rest of the semester on Tuesday. Online classes start tomorrow. I don’t check on Noah much because he’s technically an adult and if he wants to watch movies all day, that’s his business. But theoretically, he’ll have more to do soon, though it’s hard to figure out how his audio production class and band will work remotely.

1 out of 1 person who plays a musical instrument practiced

After finding out he wouldn’t be going back to school, Noah stopped practicing his drums. “What’s the point?” he said. “There’s not going to be a concert.” He’s also wishing he’d brought his camera and other filming equipment home with him. We won’t be allowed on campus to clean out his room until May. I’m sorry he doesn’t have the creative outlets of music and filmmaking right now, but he is taking photographs with his phone and I’m hoping once the sting of the missed concert fades, he’ll start drumming again. The drums are still in the basement, waiting for him.

We did have a musical event here on Wednesday night. On the evening when we would have gone to see Billie Eilish, North organized an in-house concert. They asked for glow-sticks and we ordered some online for them. I was expecting we’d each have one to wave while we watched Billie Eilish videos, but North had something more extensive in mind. There were fifty glowsticks in the package (plus necklaces and rings) and North laid them on every horizontal surface of the living room, and they strung little white lights on the television cabinet. There was a concession stand with pretzels, Cheetos, and Sprite. Everyone got a hand-painted concert t-shirt and an assortment of glow sticks. We danced briefly and then settled in to watch a selection of videos. It was kind of magical. North really knows how to bring the party.

3 out of 4 people spent some time outside

Taking a walk is part of my daily routine and that hasn’t changed. North’s been walking a lot, too, because of our “you can only socialize outside” rule. They meet up with Zoë most days and they roam around for hours. They read their step counts off their phone to me today and they’re definitely walking more than any of us. Noah will occasionally go on walks if someone invites him. Beth’s not getting out as much as she’d like, but she goes for walks sometimes, too. Other than Noah clearing weed trees out of the garden plot and North planting some flower seeds, we haven’t done much in the garden.

I’ve been taking a lot of nature pictures to keep my spirits up. That’s not hard, with bumblebees landing on daffodils in my front yard, mourning doves brooding on a new nest on the porch, and cherry trees, redbuds, and magnolia trees in bloom. Occasionally I find the exuberance of early spring in the Washington metro area jarring, under the circumstances, but mostly I find the beauty to be a comfort.

We didn’t know if we’d be able to go see the Tidal Basin cherry trees (which reached peak bloom on Friday) and practice social distancing at the same time, because the paths around the water are pretty narrow, and it can get very crowded. But there are two dozen cherry trees on the block just around the corner from us we’ve been enjoying.

We were also considering doing a Tidal Basin driving tour today. However, after crowds of people flocked there Friday and Saturday, city authorities closed Metro stops and roads that lead to the Tidal Basin, so we switched plans and went to the National Arboretum. It turned out to be a good choice. It’s much bigger, so people were spread out enough for it to feel safe, and it was lovely. The cherries there seem to be of more varied species, so the bloom is not as synchronous as at the Tidal Basin, but plenty were in bloom. They are also taller, have more slender trunks, and are planted in more wood-like groves.

No one yelled at anyone else

We’ve been doing pretty well on this count. There was some snapping on the first day, but we pulled back from the brink.

No one cried (as far as Steph knows)

I don’t know about anyone else, but I didn’t cry until Friday. It was before I got out of bed that morning, and I don’t even remember what set me off because that was two days ago– who can remember that far back these days?  I guess the stress was getting to me. I had an infected cold sore on my lower lip late in the week. I never get cold sores, so I was looking them up online and learned that they can be brought on by stress. So, okay, that makes sense. It was looking pretty bad for a while and Beth thought I should do a video consult with an urgent care doctor, but then it cleared up.

Overall, though, we are lucky. Beth and I both have jobs that can be done from home. We’re all together and life goes on, even in a crisis. North turns fourteen tomorrow, without a party, but as with the concert, they’ve figured out a way to approximate a party. I’ll tell you all about that soon.