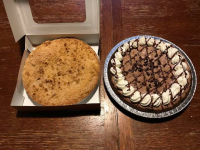 Well, things have gotten alarming, haven’t they? Here are all the headlines from the Metro section of Thursday’s Washington Post.

“National Cathedral, more than 200 other local churches to close for 2 weeks: Some services to be live-streamed: Episcopal Diocese of Washington plans to continue social work; church-run schools will weigh closures”

“Schools step up closure planning: Sidwell Friends shifts online as others will shut to prepare and clean”

“College students scramble as in-person classes axed: Georgetown and U-VA are among schools that are moving to online-only teaching”

No doubt there’s been a similar cascade of church, school, and special event closings and cancellations where you live.

On Wednesday night, in the middle of what was supposed to be Noah’s week-long spring break, we found out he’d be home an extra three weeks at least. Break’s extended for a week, then there will be two weeks of online classes and then the college will re-assess. His school year’s been extended a week as well, to recoup the time from the extra week of break, which I’m assuming faculty are using to try to figure out how to turn their classes into online classes. I have a lot of professor friends, having been one myself back in another lifetime, and right now they’re all saying on Facebook that this is basically an impossible task.

Then Thursday afternoon the governor announced all Maryland public schools would close for two weeks, starting next Monday. (North’s class went on a field trip to the National Geographic museum to see a Jane Goodall exhibit that day and the very next day, the museum closed.) There were supposed to be packets of work to bring home Friday, but North came home empty-handed. Apparently, the packets didn’t arrive at the school. There’s review material available online, but it’s optional. Not for North, of course, because we’re that kind of parents, but for the student body in general. Apparently, the missing packets were not that extensive, though. One of North’s friends who goes to another school finished hers over the weekend.

Beth’s office is switching to telework, too. They had a trial run on Friday, after which they decided everyone would stay home for two weeks. So it’s looking like the house is going to be a lot fuller than usual during my work weeks for the next few weeks, with all four of us home. I have a little trepidation about that, especially as my office consists of a desk in the corner of the living room. But Beth’s in the same boat (or worse, having no desk at all) so we can commiserate.

Once we knew everyone was going to be home a while, Beth and I found ourselves wrestling with a lot of questions. First was how strictly to impose social distancing on ourselves, well mostly on North, the only extrovert in the family. If it’s too dangerous to be at school, should they be at friends’ houses? Or at the Billie Eilish concert we bought tickets for as an early birthday present? And in the event the concert was cancelled, could they have the slumber party they requested as a consolation prize?

One of these questions resolved itself. The concert was postponed with a promise to honor tickets at a later date. That was a relief because it spared us from having to be the bad guys (and yes, that was a pun). And we decided no party, but our current stance on hanging out with friends is one at a time, if they stay outside and don’t touch each other. This needed specifying because North is physically demonstrative with friends.

Even before all this, it was already kind of a strange break for Noah. Every other break he’s had in college so far we’ve immediately or almost immediately gone somewhere—Hershey Park during fall break, Rehoboth during Thanksgiving break, Blackwater Falls State Park during winter break.  But this time because North wasn’t off school we didn’t make plans to go anywhere. (And now that both kids will be off at the same time, overnight travel seems ill-advised.)

So he’s been having a low-key break. Beth fetched him from Ithaca a little over a week ago, because his last class was too late in the day for him to take the bus he usually takes. Last weekend and the following several days we all went about our normal routines while he watched a lot of movies and television. He didn’t even have any homework to do, other than occasionally practicing his drums for band. (He ended up with a surprisingly light course load this semester.)

Monday he had a dentist appointment and did some yard work for me, then he was sick for two days—no fever, no cough—and he pretty much laid low. By late Wednesday afternoon he was recovered enough for a walk to Starbucks when North got home from school. Thursday he did some more yard work. Friday he did some housework and got a haircut. Over the course of the week we read The Rest of Us Just Live Here and started The Caledonian Gambit.

One thing we did plan for Noah’s original break and had decided to go ahead with was a maple syrup festival at Cunningham Falls State Park. We decided that since it mostly an outdoor event, the risk was relatively low. And if we’re going to be even more restricted in our movements later (because who know how this is going to turn out?) we thought it would be nice to have an outing. But the festival, which was scheduled for today, was cancelled.

Noah and I spent the day at home. We read some more and, because we have time for a new television series, watched the first two episodes of Counterpart. North spent the afternoon with Zoë, roaming around Takoma. Beth was mostly at home, but ventured out to drop North off and pick them up and do a little grocery shopping. Among other things, we needed pies for Pi Day.  We now have Dutch apple and chocolate cream. Beth had also been to the grocery store yesterday and reports that they’d been low on frozen vegetables, canned beans, and potatoes yesterday and today they were almost completely wiped out of fresh produce. (Tip for locals, the Co-op is pretty well stocked.)

“Local cases: Where the area stands”

“All of region’s schools to shutter: Coronavirus move is a first: extended closures pose huge range of challenges”

“This is the scariest thing”

“Buying, hoarding and some fighting, too”

Among all the bad news, we do have a little good news. North found out today they got into their first-choice high school in the second chance lottery. We are still waiting to hear from the VAC, but North’s very happy.

Meanwhile, North has made the following homebound schedule for themselves:

Noah and I plan to read every day and watch our new show on days when my work permits. Beth and I are going to try to do something outside every day, including getting the garden started. And we’re going to make a list of chores for the newly available teenage labor force.

So, we’re hunkered down for the long haul. We’re all feeling well, we have each other, and we have pie.