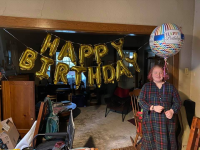 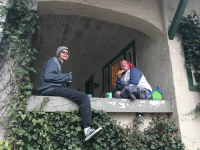 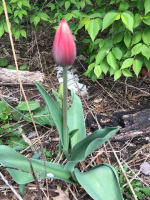 When we were returning from the National Arboretum two Sundays ago, we noticed some across-the-street neighbors having a family dance party in their front yard, with a Beatles tune blaring from the car in their driveway. It wasn’t until I was inside the house that I realized what song it was—“Birthday”—and that seemed auspicious since it was North’s fourteenth birthday the next day.

North couldn’t have a party, of course, so just as with the Billie Eilish living room concert, they came up with innovative solution. They’ve been doing this a lot. When their trans kids’ support group March meeting was cancelled, we walked to Starbucks—this was almost two weeks ago, when Starbucks was still open—and they got an iced chai. This was because right before group we often stop at the coffeeshop in the atrium of the hospital where it meets and they always get either a mango smoothie or a chai. And once they’d had their chai, they texted someone from group and chatted a bit.

North’s birthday celebration was what we dubbed a “slow-motion party.” One, or in one case two, friends at a time came over for a brief visit and a slice of birthday cake on the porch. It actually started two days before their birthday because two friends couldn’t come Monday. The cake wasn’t baked yet on Saturday, so North cut down a cupcake recipe and made three cupcakes, one each for Jay, Miles, and themselves. Jay and Miles are twins, so figuring they only bring one family’s worth of germs, we’ve let North see them together. They brought a big stuffed bee for North, who is fond of bees.

On the night before their birthday, we tasked Noah (who’s always the last one up at night) with blowing up the balloons of the “Happy Birthday” banner and hanging it up, so North could see it as soon as they woke up. I missed them spotting it because I went outside to fetch the newspaper right before they emerged from their room, but apparently, they came into the kitchen and started talking to Beth and Noah, angled in such a way that they couldn’t see it for quite a while, as Beth and Noah waited and waited for them to see it. When they did, they were very excited about it. It was shiny and extravagant and just right.

That morning North got a birthday email message from the eighth-grade class administrator at their school. That’s never happened before, so I guess they are sending them to all the kids whose birthdays fall during the school shutdown, which is a nice gesture.

In the morning, Charlotte came, bearing a Venus fly trap, and had her slice of cake with North on the porch. Casper came in the early afternoon. Zoë was the last guest, and she stayed a few hours, even though it was as damp, chilly day. At dinner time, Beth, Noah and I joined them and we ate a dinner of tacos and fruit salad together, spread out on our spacious porch.

After eating, North opened their present from Noah, a battery-powered flour sifter, and from us, a little pot of mixed succulents. Both of these things were on their list, but they were surprised to get a gift from us, as we’d told them the Billie Eilish tickets (which will be honored at a future, unspecified date) were expensive enough to be their only gift. We cracked, though, under the pathos of all the postponed birthday fun. We’ve also promised North a birthday party sometime in the future. I thought it would be fun to do it three months after their birthday, because 14 ¼ would look cool on the invitations. But if that’s not possible, maybe a half-birthday party is in their future.

By coincidence, a lot of North’s guests also have March or April birthdays. Zoë’s having a party in a park with just three guests (we made an exception to the one-friend-at-a-time rule so North can attend this event because Zoë is North’s best friend).* Miles and Jay are having a virtual party via video conferencing and are promised a trip to a resort with a few friends during the Time After we’re all wistfully awaiting.

After Zoë left, we let North pick the television and they chose Blackish, so we watched a couple episodes and then their birthday was over. Well, sort of over. We left the banner up all week and I let North menu plan dinners for the whole week, starting one day before their birthday—we had lasagna, tacos, breaded tofu sticks with applesauce, tater-tot-topped pot pie, fettucine alfredo with broccoli, pizza, and tortellini with broccoli. Gifts continued to arrive in the mail throughout the week, too. My mom sent a box of bee-themed gifts, which included a ceramic honey pot in the shape of a beehive my grandmother made in a ceramics class she took in the seventies. I didn’t remember it when Mom told me about it, but I recognized it as soon as I saw it. There was also a honey dipper, an oven mitt with bees on it, a beehive ornament, and a book about bees.

And in non-birthday related news…

On Tuesday, Beth’s office announced everyone would keep working from home through the end of April. Beth said it would be nice if they really go back on May Day, since she works for a union. Speaking of Beth’s work, she’s been slammed because there are so many health and safety issue for employers and the union to negotiate. I’ve been busy, too. Turns out health writers are in demand during a pandemic. Go figure. Actually, the busyness is partly coincidence. Only one assignment—a completed newsletter that switched topics from detoxification to immunity and had to be rewritten on short notice—was spurred by current events. The rest has to do with my other job, as the editing for EPA has picked up.

Noah completed his first week of online classes Friday. The more lecture and discussion-based classes (Environmental Studies, Media Industries, and Computer Science) are translating better to a remote format. More hands-on classes like Audio and band just aren’t going to be much like they were intended to be. Audio is turning into a discussion class with some optional assignments for students who own the program they use. (Some students didn’t buy it and were using it in the lab on campus.) I’ve encouraged Noah to do these assignments, not for his grade, but because it’s probably a better way to get the practical skills he needs out of this class. Meanwhile, and most disappointingly, band has turning into a writing-about-music class. I’d hoped the teacher would have them record themselves playing at home, or something like that, but that wouldn’t work because some students left their instruments on campus when they thought they were leaving for a week, rather than for months.

Meanwhile, on Wednesday our school district announced schools would be closed for at least four more weeks. Online classes start for North this week. During the two-week hiatus in between school closing and online school starting, they worked on some review assignments for English, history, and science the school district provided. They didn’t do any geometry because those assignments were in a subfolder and they didn’t see them (we just discovered this snafu) and there was no Spanish because their Spanish immersion classes have a unique curriculum that I guess serves too few students for the district to accommodate. They brought home a sketch book from art class and drew in it, too.

Overall, though, the work was pretty minimal. I’m hoping when formal online school commences on Wednesday, they will have more to do. As the only extrovert in the family, it’s hard for them being in a house full of very to moderately busy people and not having much to do themselves. (I am going to require them to do the geometry on Monday and Tuesday, in addition to the learning-to-use-the-software assignments they have those two days.)

Meanwhile, spring continues to progress. We had a very mild winter, especially in February and March, so all the flowers seem to be blooming in a compressed time period, the ones we usually have now, like daffodils and cherry blossoms (these past peak, but still pretty), plus tulips which we usually see in April and even irises, which are usually make a late April or early May appearance. It’s unsettling if I think too hard about what it means about climate change, and maybe we all should be thinking about climate change in addition to our current predicament, but for now I’m not going to look a gift tulip in the mouth.

*Update: I wrote this over the weekend and things have changed. This morning the governor issued a stay-at-home directive that takes effect tonight. Marylanders are not supposed to leave the house except for essential work or to shop for food, pick up prescriptions, or take short walks (alone or with people in our households). So, North and Zoë are getting together one last time this afternoon, and Zoë’s party in the park is scotched, (as are our tentative plans to drive to the Bay next weekend).