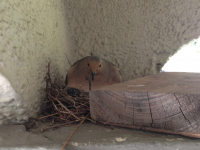 The day after North got back from Colombia they went to school for exactly one day and then it was spring break. The break was shorter than usual this year, because of the Governor’s order dictating when the school year has to start and end. Instead of the usual ten days, it was six (from the Wednesday before Easter through Easter Monday). Between that and the fact that we’d all been traveling a lot recently, we decided not to go anywhere over break this year.

So the break was short, but eventful. North attended Gretchen’s spring break drama camp, which they’ve never done before because we’re usually gone. It was just three half-days and culminated in a performance of two songs (with choreography) from Dear Evan Hansen. North had a solo in one of the songs, just a few lines, but no one had any long solos, as there wasn’t much material and there were fourteen kids. Eight of them were singing Evan’s lines. North was one of two Zoës and even danced a little, as much as their crutches would permit. (Gretchen never goes easy on anyone. I think that’s one of the things North likes about her.) Most of North’s friends were out of town, so in the afternoons after camp they amused themselves by dying their hair blue-green and making brownies.

North also spent a lot of time on the porch in the sky chair, watching the mourning dove nest. Two doves built it in late March and the chicks hatched while North was in Colombia. I’d been worried about the nest because last year the doves built a nest in the exact same place and it was attacked by some kind of predator, which killed the chicks, leaving a bloody mess behind. But that happened almost as soon as they hatched and these two chicks were bigger and already venturing to the edge of the ledge and flapping their wings by the beginning of break. (The picture is of the dove sitting on the eggs. I didn’t want to get close enough to the little ones to take their pictures.)

Meanwhile, Beth, Noah, and I were all working for most of break. I kept more or less my normal hours, but Beth had Good Friday off, so Noah decided to take it off, too. He went into break behind in a couple subjects—possibly because of our back-to-back trips to visit RIT and Ithaca the two previous weekends—and he spent the five other days catching up.  Well, I’m not sure how much he worked Thursday, what with all the distracting commentary on the Mueller report there was to read.

But we made the most of that day off Friday. I read several chapters of The Handmaid’s Tale to him in the morning. After attending North’s performance in the early afternoon, we split up, and went to two different movies. Beth took North to see Fast Color, which they both gave good reviews. Noah and I went to see Us, which I recommend if horror is your thing (but I don’t if it isn’t—it’s bloodier than Get Out.) At the bus stop as we waited to go home, Noah and I discussed possible allusions to The Time Machine and the film’s treatment of class. I am really going to miss this kid.

Saturday we dyed Easter eggs. I made the two-toned ones on the ends of the line, the yellow/green and pink/purple ones. One of North’s eggs, partly pink and partly blue, was inspired by the trans flag. Beth did the one in the floppy hat. A long time ago we got a kit with these hats and we’ve been re-using them ever since then. Noah did the one that looks like it’s sticking out its tongue, but he actually clipped an ear off a bunny sticker. It represents the creatures that eat rabbits in Us. It reminded me of the time I was a teenager making gingerbread cookies with my family and I made one in the shape of Marie Antoinette, beheaded and holding her head. (I used tic tacs for the blood.) Come to think of it, this egg is a lot more subtle.

Sunday Beth and I spent much of the day working in the yard, taking down weed trees, tearing vines off the fence, mowing the lawn and preparing garden plots. I planted peas in one of them, possibly too late, seeing as how they already have pea shoots at the farmers’ market—and parsley and cilantro seeds in pots the next day, so now I guess I can say the garden is started. (We’ve also got rosemary that survived the winter and mint, oregano, and sage coming back from last year with no help from me.)

The next day Beth went back to work but the kids were home for one more day. North’s big project for the day was making whole-wheat bagels. It was Earth Day so on my daily walk through the neighborhood, I decided to photograph the flowers and flowering trees that bloom so exuberantly this time of year.

We’d encouraged Noah to make a decision about college over break and it was the last day so at dinner on Monday we asked him what he thought. We went through the pros and cons of the three schools he was considering and by the end of the meal, he’d decided. He’ll be going to Ithaca. I’m happy for him and very proud of his hard work in three different magnet programs over the past nine years. Sometimes it seems hard to believe that after thirteen months, nine colleges visited, seven initially notified of his scores, four applied to, and two visited a second time, the decision is finally made. The next part of his path is visible and waiting for him.

Tuesday the kids went back to school and I discovered the dove’s nest was abandoned. This wasn’t surprising as I’d seen one of the fledglings out of the nest, walking around the porch floor a few days earlier and then it was back up on the ledge later, so I knew it could fly, even though I never saw it. It’s been four days now and they haven’t come back. I am glad the young birds are launched into their new lives, but it does seem as if whoever is in charge of the symbolism of my life got a little heavy-handed here. I mean, a literal empty nest on my porch? It’s five years and several months until mine is empty, but it’s seeming a lot more close and real these days.