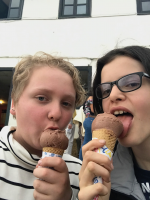 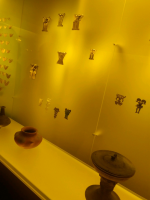 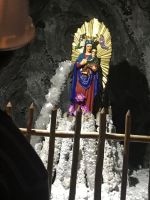 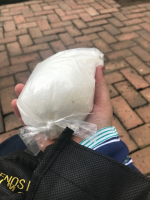 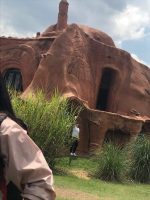 When North was in second grade, I told them we were going on an “adventure,” when we were actually just going on a walk. This was a holdover from when the kids were very small and I used to call any outing an adventure. North patiently explained to me that it’s only an adventure if it involves “climbing a tree or going to another country.” This became a family joke.

Well, North’s climbed a few trees since then, but until this month they hadn’t had the other kind of adventure. They returned from the seventh and eighth-grade Spanish immersion trip to Colombia on Monday evening. I wasn’t there, so I’m going to tell the story in North’s own words, though their texts, mostly to Beth. I check my texts less frequently, so Beth was the main conduit of information. Also, some of my text exchanges with North were in Spanish. I included a little of that as bonus content for those of you who can read Spanish. All texts are shared with North’s permission and they were at least as redacted as the Mueller report.

Note: All time stamps are U.S. Eastern time. It was an hour earlier in Bogotá.

North: On the plane
I get to be buddies with Zoë
But the customs line is sooo long
And I have to stand

North: IM IN COLOMBIA
I  met P and J [North’s host couple], very nice, I’m tired so I don’t completely remember our plans for this weekend, but they sound fun and we’ll be hanging out with Zoës family [North’s host family consisted of a school administrator and her husband. They had no kids, so they often socialized with Zoë’s host family, and at school, North and Zoë both shadowed Zoë’s student.]

Beth: You didn’t get much sleep

North: Nope
I think what she said were doing today is that we’re going to drive through a little town with lots of mountains and a lake, and then we’re having dinner with Zoës family

North: Yeah and we’re making plans to spend most of Sunday with her family too, on Sunday we have a welcome dinner for our chaperones that I’m going to, and the students have welcome breakfast at the school on Monday

North: I ordered at a restaurant in Spanish
Oh yeah and I’ve been communication solely in Spanish for the past twelve hours
I am in pain because apparently public bathrooms aren’t a thing in Colombia

North: 2 hours later we got home and I used the bathroom
It was wonderful

Beth: Sorry you had to be uncomfortable for so long
Early to bed tonight?

North: Not right now we’re going out to dinner with zoë’s hosts

North: It’s always seemed normal to me, but I’m realizing now that the fact that I can speak 2 languages is really cool. Language is still such an abstract thing that we don’t quite understand, and the fact that some people can understand more than one is really spectacular if you think about it.
We’re still not home from dinner btw [North learned first-hand about the late hours people in Spanish-speaking countries often keep on this trip.]

North: We were walking around and my host brought me into a clothing store. I think it’s her way of saying, “your wardrobe is atrocious” [P quite generously bought North a lot of clothes on the trip.]

North: A guy stopped us on the street, tied strings around our wrists and told us how much Jesús  loves us (hint: he apparently loves us a lot)

North: I’m starting to see bits of freckles peeking out

North: I like this whole going to school for half an hour then getting on the bus with Zoe for two hours thing. It’s nice [The American students spent one whole day at the host school, but the rest of the days, they were mainly on field trips.]

Beth: It will be hard to go back to your regular routine

North: In the US, kinder eggs are illegal, here, it’s illegal for a minor to drink coffee

Beth: Interesting! How old do you have to be for coffee

North: My knee has been getting more stiff and painful recently, it’s getting harder to do my exercises…We’ve mostly been using the wheelchairs on field trips because I don’t enjoy standing on one foot for hours on end

North: Zoë got me a kinder egg

North: Cuz I wasn’t allowed to get the one I found at the store
I’ll be careful not to choke and die

North: Today we had papaya with Parmesan on top for breakfast
I did not like it
In the slightest
But I ate all of it
I wouldn’t recommend it

Beth: Good for you for eating it

North: Is putting sunscreen on your hands a thing? [The kids got a lot of warnings about using sunscreen because the sun is stronger at the high altitude of Bogotá.]

North: Guess what I got you?

Beth: Salt? [There was a field trip to a salt mine that day and Beth, who is a connoisseur of salt requested they bring some home]

North: You guessed it!

North: They had no small bags so

North: The back of my neck is burned and my cheeks are redder than usual

Beth: They said that might happen! Lots of sun in the salt mine?

North: It seemed dark lol but outside of it yeah

North: Today they said something I was very annoyed about, the only after school activity available was robotics and they said, “but robotics is not for girls.” There is so much wrong that sentence and I would have proved them wrong and gone to robotics, but I don’t like robotics.

Beth: Computers were not for girls when I was in junior high. It’s terrible but people keep fighting for change and change happens

North: Tim Burton dumbo just came out here so we saw it
It’s literally the equivalent of 3 dollars each for tickets

Beth: Was Dumbo dubbed into Spanish

North: Yep
It was fairly easy to understand but the lips not matching the words was trippy

North: I’d love to go to this school. No yelling teachers, people are very causal and call their teachers by their first names and use informal conjugations, the food is amazing, and THE HALLWAYS ARE OUTSIDE

Beth: You are going to need a lot of rest when you get home

North: But I still have to get up at 6:30 the next morning to get to school
Well shoot, I just realized that the two adults coming home with me are drinking
Who will drive safely
Nobody [We don’t drink, so North’s not accustomed to seeing adults drinking and doesn’t really have much context for what’s safe, so they needed some reassurance.]

Beth: If they are having a glass of wine with dinner it will be OK
I am sure your teachers will make sure you are safe

North: It’s driving P crazy that she can’t coordinate my outfit cause we’re going to the wetlands today and I can only wear stuff that can get dirty

North: Oh no
I just looked
They put cheese on mango
You can’t mess up mango
But I just saw it happen

North: I have to somehow navigate wetlands on crutches today
It’s our community service

North: Somebody decided that rather than having me organize a library with the eighth graders it would be a good idea to take me on a 2 hour hike

Me: Did you survive the hike?

Me: What kind of terrain?

North: Tall grass, it was wonderful for crutches

Me: And did you dance at the dance?

Me: What’s the plan for tomorrow?

Me: Well you can rest your leg Monday on the plane

Me: You’re visiting a colonial village according to P

North: Did I mention that I spent $12 on the hate u give only for it to be available for free on the flights
I just realized I forgot to wear my retainer on this entire trip

Beth: You can start tonight!

Beth: Did you go on the mountain hike?

North: Nope [This was the only activity North skipped due being on crutches, on a very active trip.]

North: There are so many stray dogs here but they’re all so calm, they don’t bark and aren’t scary at all. I’m petting a dog [North is very afraid of almost all dogs. Finding a host family without a dog was one of the factors that delayed North getting matched with a family until almost before the trip started. Being vegetarian was another. It’s possible being non-binary was yet another, although North says they were perceived as a girl by almost everyone. They weren’t even sure if P and J knew, though the trip organizers from North’s school told us months ago that they were looking for a tolerant family so I assume they did.]

Beth: Sounds like the hotel was kind of a disaster… I mean adventure. Ms U sent out a message [After they left their host families, the Americans spent a couple more days in Colombia and stayed in two very different hotels]

North: There were fleas, exposed wires in the shower, and of course no WiFi and little service
But there was a cat

Beth: A stray or did it live at the hotel?

North: It was a stray but lives in the hotel where guests pet, feed it and let it into their rooms

North: This is like the size of a room you would get for all four of us and it’s just me and Zoë

Beth: Welcome back to the USA [North was going through customs in Atlanta]

North: I put the salt in my carry on.
They thought it was drugs

Beth: Did they confiscate it?
Is it weird to be back where most people are speaking English?

North: They just scanned it thoroughly and patted me down
It’s fine

North: About to take off. I have the entire row to myself

A few hours later, North came off the plane, tired but very happy. It’s been nice having everyone at home together for the past five days, but I’m glad they finally got to have the non-tree climbing kind of adventure, thanks to the hard work of the teachers and administrators of both schools and the generosity of their Colombian hosts. ¡Gracias a todos!