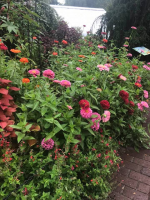 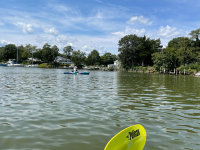 Something happened about a month ago I never mentioned because it involves money and it’s often hard and awkward to talk about money. It does start with an amusing story, though, so here goes. I got phone message asking me for my bank information so a transfer could be made to my account. I figured it was a scam. I mean, you would think it was a scam, right? It wasn’t from a Nigerian prince (rather a woman with a distinct Jersey accent), but it was close. Then I got the message again and something about the way the message was worded seemed the tiniest bit more credible. I still didn’t take it seriously and I didn’t call back. Then I got a call from my sister, asking if I’d gotten these messages and I said yes. Well, dear readers, it wasn’t a scam. It was an inheritance from my father, who died in January 2010.

Shortly before he died of throat and lung cancer, my dad told me he was leaving me a good deal of money, enough to put both kids through college. But after he died, my stepmother informed my sister and me that he had left their finances in a mess, there were large unpaid tax bills, and there would be no inheritance for either of us. Flash forward eleven and a half years. My stepmother finally untangled the finances and paid off the debts and there was some left after all. Not nearly enough to put two kids through college, but enough to feel like a windfall.

Luckily, after Sara got her second call from the transfer company, she called them back, and then she called my stepmother, who had not mentioned anything to either of us, and it was all true. My half of the money’s been sitting in my checking account while we wait for our financial advisor to get back from a long vacation, but the rough plans are to give some away, to take an extra trip to the beach this year, and to put the bulk of it toward retirement.

My father was a newspaper editor with a passion for investigative journalism and the two stories I remember him being most zealous about during my youth were the Three Mile Island nuclear disaster in 1979 and the MOVE bombing in 1985, so I thought an environmental cause and a racial justice one would be appropriate, but I haven’t picked organizations yet. I am also interested in Afghan refugee resettlement either in the U.S. or abroad because I can’t help but be deeply saddened by what’s happened there and I think he would be, too. Feel free to make suggestions if you have a favorite non-profit working on these issues. For the environment, I am inclined to go with climate change because if that isn’t halted, no other environmental issue is going to matter.

It’s nice to have this money, both for what we can do with it, but also to know that my father’s wishes in his final days were honored.

As you probably guessed from the title, I have bad news, too. I was diagnosed with diabetes ten days ago. I found out as a result of a routine physical. I didn’t have any of what you’d think of as the classic early symptoms like excessive thirst, urination, or fatigue. But despite this, it wasn’t a huge surprise. I had gestational diabetes when I was pregnant with North and that puts you at greater risk. I may have had it for a while because it’s too far advanced to address with diet alone. So I’m taking medication and waiting for a session with a diabetes coach. As part of my treatment, I may also be getting a continuous glucose monitor.

I am feeling sad and grumpy about this. The other day I found myself eating a salad for lunch and resenting the salad, even though it’s not like I never ate (and enjoyed!) salad for lunch before. Maybe it was the salad—the dressing seemed like a mismatch for the greens—but more likely it was just me. I guess I need some more time to adjust to this reality.

Beth and I went kayaking two days after I got the news. She goes almost every weekend and I often go with her. I didn’t want to go—I just wanted to hole up at home—but the reasonable part of my mind told me I was unlikely to feel worse for being out in nature and getting some exercise and I might even feel better. Well, it didn’t make me feel any better, but it didn’t make me feel worse and I got some exercise, so there’s that. The next day we went for a drizzly walk at Brookside Gardens, which is pretty any time of year, but just now it’s full of late summer flowers, mostly roses and zinnias, so that was nice.

This weekend all three of us kayaked, at Quiet Waters Park in Anne Arundel County. We’d discovered it two springs ago when we were looking for places for Noah to fly his drone, but we’d never kayaked there. This was the first time North has come with us. They hadn’t been in a kayak since Girl Scout camp the summers they were nine, ten, and eleven, but they remembered what to do. We didn’t see as much wildlife as usual, but there were gulls, cormorants, and a lot of dragonflies and it was nice to be out on the water.

Noah’s been back at school for three weeks and North for two. They are both settling into the new school year well. Noah is editing two shows for ICTV, one sketch comedy show and another one he described as “about students who plan a heist to get money for their thesis film.” He’s also applied for membership in the drone club. He still has no roommate—and this late in the semester I doubt he’ll get one—but he is socializing. He had a friend over to his place last night to watch New Rose Hotel. He says the basil plant is still alive.

North tried out for the school play and also applied to be stage manager. They can’t do both, but they were interested in both so they thought they’d apply and then make a choice if needed. Callbacks for actors are next week. I’m glad they’re getting involved in theater again. Not counting drama camp, it’s been a while. They’ve made a couple new friends and they’re enjoying their theater and English classes. Most days they come home cheerful. On Friday, they had a tally of compliments they’d received (four on their earrings, one on their shoes, one on the color of their eyes).

A day with six compliments seems like a pretty good day. I’m hoping for more good days for both kids as the school year progresses.