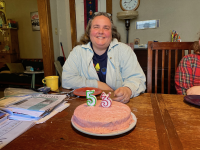 Sunday morning Beth and I exchanged Mother’s Day greetings hours before we saw either of the kids. Beth set the alarm for 6:45 and she was out the door to go grocery shopping by 7:30. She likes to get there early, before it’s too crowded. Noah emerged from his room around 9:50 and said “Hi” to me.

“What’s the first thing you should say to me today?” I whispered in his ear, despite the fact that there was no one else in the room.

“Happy Mother’s Day!” he said and then in his own defense, “I just woke up.”

The kids were watching Portlandia a little while later and I reminded them that if they had anything they needed to wrap, they should do so. They both needed to wrap. Shipping delays waylaid North’s Mother’s Day gift to Beth and Noah forgot to change his default address when he ordered mine so it got sent to the Ithaca College mailroom, from which he is valiantly trying to rescue it. But luckily North’s gift for me and Noah’s for Beth arrived so we each had something to unwrap. I certainly can’t complain about late presents, given that the last of the books I got Noah came today and his new pajamas haven’t come yet and his birthday was nine days ago.

Anyway, I got a coffee table book about growing and cooking with herbs from North. This was nice because over the years my gardening has gotten more herb-centric, as I lose patience with other plants and their pests and diseases. Noah got Beth a jar of cherry salsa (a favorite of hers) and bottle of cherry syrup to use for homemade soda or ice cream topping.

In the afternoon Beth and I took Noah out to fly his camera drone. It felt really strange to get in the car, as I don’t think I’ve been inside it since March. It was even stranger when the car started moving and I was suddenly more than a mile from my house, an area which apparently still exists. I don’t think I’ve ever been so happy to see Interstate 270. The ever-present signs saying “STAY HOME/SAVE LIVES/ESSENTIAL TRAVEL ONLY” gave me only small twinges of guilt.

First we tried a state park about twenty minutes from home, but when we got to the entrance it was blocked by park police cars and there was a sign that said PARK CLOSED. We’d checked before we left and the web site it was open, so Beth guessed they were only letting a set number of people inside at a time and it was at capacity. Whatever the reason, we needed to find another place to fly. We tried a nearby air park for model airplanes and drones, but you have to be a member or be admitted as a guest and no one there was authorized to admit a guest, so we left. We passed by a county park with park police in the parking lot. Finally, the fourth place we stopped, a little county park, was unguarded and didn’t look too crowded. It consisted of a field big enough to accommodate two soccer fields (the goals were still there, but without the netting) and a path that led into the woods where people were running, walking, and biking.

One family was picnicking at the far side of the field and a man was tossing a baseball to a boy with a bat at the other end. We found a spot in the middle far away from either of these groups, and Noah set up the drone and practiced flying it and filming with it. It was a beautiful sunny day and the footage he got came out very clear, even when the drone was high above us. He practiced takeoff and landing a few times, maneuvered it through one of the soccer goals, and took a picture of the three of us with it. After he was done, we took a walk on the path through the woods. It was a nice outing.

The next day was my birthday. Celebrating our third semi-quarantined birthday in the span of seven weeks (fourteen, nineteen, and fifty-three) made me think about my own fourteenth and nineteenth birthdays. The fourteenth was memorable. It happened during a trip my mom and ten-year-old sister and I took to Disney World and the Gulf coast of Florida with my mother’s boyfriend and his son, who was my sister’s age. I think it was a test run to see how we’d be as a family. This turned out to be moot, as Mom and Bill eventually broke up. (She married my stepfather Jim three years after the Disney trip.) Even though the relationship didn’t last, I remember it as a happy trip.

I have no real memory of my nineteenth birthday, but it must have been unsatisfactory because I complained so much about having a birthday that was always going to fall either during reading period or exams for all four years of college that my friend Jim threw me a surprise birthday party four months to the day before my twentieth birthday.

I suppose fifty-three will be memorable in its own way. It began with Noah enthusiastically greeting me, “Happy birthday!” seemingly pleased to have gotten it right. I didn’t have a lot of work, so I spent the morning doing laundry, reading Jeanette Winterson’s Passion on the porch, and riding the stationary bike in the basement.

We decided to have cake and presents after lunch so we could have dessert after lunch and dinner. “That’s a great idea!” Beth exclaimed when I proposed it. She’d made the cake—a lemon cake with strawberry frosting—the day before so it was ready. I almost forgot I’d asked Beth to buy supplies—brie, apricot jam, and rosemary crackers—for a special birthday lunch until I was already heating up leftovers and Beth reminded me. We all ate our separate lunches and then I opened my presents, which were mostly books from Beth and my mom: Stephen King’s If It Bleeds, Theodora Goss’s European Travel for the Monstrous Gentlewoman, and Philip Roth’s Nemesis. (Later in the day Margaret Atwood’s The Penelopiad arrived.) Noah printed out a down-payment on his gift, the first five chapters of The Island of Dr. Moreau, which is on its way. North got me a color-changing mug. It’s black but when you put a warm beverage in it, you see the boy in the yellow slicker and the balloon from It. It was a nice collection of gifts. There’s nothing quite like the feeling of having a big stack of books you want to read, especially now.

After we’d eaten the cake (delicious as always), Beth went back to work and the kids and I walked to the Starbucks in Langley Park, which just re-opened last week. It’s carryout only and you order on the app. We carried everything home because you can’t go in the store. They’ve put a table in the doorway and you pick up your order there. The walk was about as long as my usual morning walk (a half hour round trip) but it felt longer because I was actually going somewhere, not just wandering. When we got home I sat on the porch again, scrolled through Facebook birthday greetings on my phone, and sipped my first latte since March, very slowly to make it last.

My mom called with birthday wishes and then I did a little work, writing a blog post about coffee and heart health, and then Noah and I read a chapter of The Martian (a book we started before either of our birthdays) and watched most of an episode of The Magicians. Dinner arrived before we’d quite finished. It was a feast of Mexican food—I had tortilla chips with salsa, salad with mango and avocado, spinach enchiladas, pineapple juice, and tres leches cake (I was so full had to save the cake for later in the evening).

Noah had an evening class to attend (his last of the semester) and the rest of us watched an episode of Gilmore Girls, which we recently started.

Now we are finished with the spring birthday season at our house. This is what we know about the rest of the spring and the summer:

As for the fall, your guess is as good as mine, but I hope the kids will go back to school (unless Noah decides to take the semester off to volunteer for a campaign, which he was already considering pre-corona). The school district is considering a bunch of different options, including a hybrid in-person and remote schedule, with various plans for staggered attendance.

One little wish I have for fall is that on Beth’s fifty-fourth birthday in November we can go out to dinner, if that’s what she wants.